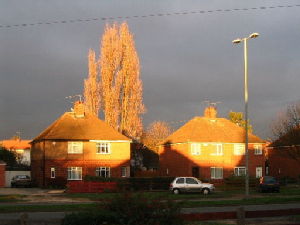 There's no place like home, and there's definitely no place like Canley. Or maybe it's Tile Hill. But I haven't found any other road than Charter Avenue which has been aligned so perfectly that every evening the sun casts a forewarning spell over the neighbourhood. Looking at the picture almost makes me think I took at at two different times but I'm pretty sure I missed 5 minutes of Neighbours just to capture this moment of beauty in otherwise miserable Canley.

No offense to Canley – my lack of enthusiasm might be due to the fact I still have to adjust to taking care of myself instead of having someone clean my room and 1Mbs internet etc. My house is actually conveniently placed 4 mins from Tesco ergo 10 mins from the Maths Department – not to mention the 8 mins to my friends' house who own cars and occasionally drive me to places when it's too cold/dark/far. It's not run down and has a lovely garden which we still haven't planted the bulbs in my housemate bought 3 weeks ago… It finally has a working washing machine though the microwave is now broken which leaves me to eating pizza and chips even more than twice a week.

Why is Canley so miserable? I just forget it's there. The other night my friends drove me to Rainbow's Chinese takeaway and I had no idea that place fitted between my house and Hearsall Common. I only realized the size of Canley whilst walking home 3am from Earlsdon (quite impressive I realized anything that night) which took me 35 mins i.e. 15 mins more than I thought it would having only seen the detour the bus takes.

Anyway – still wondering why Canley is miserable. I'd like to say it's the people that are miserable, but they actually really seem to enjoy living in Canley. Screaming, shouting, chanting to passers by and laughing at them… Kids joyfully racing down the sidewalk on their bikes on their way to wherever – hurling some unidentifiable words at me while walking at the wrong time of the day (5pm-8pm is when they're most active). 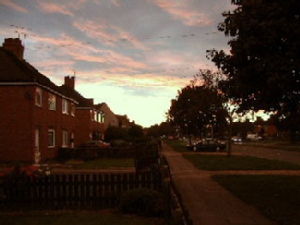 And the people are not that miserable to me. I asked my neighbours if they were going on a trip when they were busy with their car and their kids seemed all excited. After a look of 'mind-your-own-business' which almost made me cry and run into my house, the mother grinned and said they were just cleaning out the car of all the crisps and stuff (oh how I'm looking forward to family life! Or maybe first just owning a car…). They even say hi to me now when I run into them in Tesco's – even when I haven't spotted them first!

The children (the ones wearing red jumpers after school – which school is that?) are annoying but no more annoying than the regular English kid (I know most kids are annoying to people who don't know them, but in England they seem to outweigh the nice ones 99 to 1 as opposed to 9 to 1 – no offense). In the end they just want to know what your business is. Thank god I'm tall (again no offense – this time to not so tall people – but if I were smaller I would be picked on more as I'm easily scared/startled/whatever).

So actually Canley is not that miserable. It's just England. But kudos to the planners of Charter Avenue who helped make it look better those 10 minutes a day when the sun is setting.

P.S. I'm sorry if you cannot find a reason for this entry's existence, but here is one: I just want friends and family to know I'm still alive and how life in Canley is.
P.P.S. Even though I just realized Canley isn't miserable, I'm planning to go and live on campus next year. Convenience over independence.