Thought using the 'follow-up' feature would make this account look more professional. Anyway - after a fun-packed Christmas shopping weekend in London, where only a little shopping was done, but where I met more Rev people than expected, I now feel geared up to take on the rest of the mad day Wednesday 8 December. It wasn't as action packed as I might have made you believe earlier, I just had loads of pictures.

I don't remember what I did after getting back from the school workshop, but 90% chance I had a tasty cheese ham sandwich and a glass of pineapple juice from the really tiny and slow-but-friendly service bar at the hotel. Full of energy, I was ready to take on the biggest adventure of the week: the search for the Bajan Green Monkey. Phil had already spotted one (size: somewhat bigger than a cat, somewhat smaller than a dog; color: brown with maybe some hint of green; tail: curly like a tumbling monkey; attitude: cheeky rather than tumbling) in the streets of the Gap, but I wanted to see one with my own eyes! Unfortunately, a trip to the inland wildlife reserve seemed a bit too ambitious, so we got a great group of people together to visit the Graeme Hall Swamp (which was conveniently enough only a 10 minute walk away).

Not completely sure if I mentioned it before, but Barbados seems to be more about culture than nature. The wildlife reserve we visited was rather a piece of land (almost dedicated to more business and touristy stuff, though obviously the reserve is a tourist attraction as well) turned into a true mangrove. To be fair, the big lake was already there, but I understood they used the rest of the land to make it a true refuge for whatever birds pass by, and to reconstruct/preserve one of the last mangrove forests on the island. 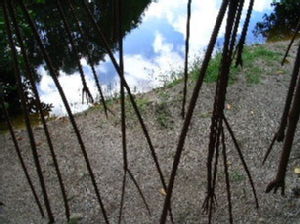 Sorry – enough serious talk! Where's this monkey!? Well, I didn't spot it. We had a great tour of the park where we saw huge fish and really tiny crabs with big claws. And lots of birds and plants and trees. We had a really nice tour guide with Bajan accent who tried his best not to give us a school trip kind of feeling. Apart from the hilarious little crabs, most exciting was the bird with the spoon beak ('lepelaar', see gallery). We spent a great deal of time in the reserve, as it was really peaceful and cool and serene and all – a nice place to hang out.

Afterwards we went for ice cream (first one this week for me!) to return later to find the monkey. Stupid me didn't return for I needed to swim in the pool which I hadn't done for two days, and needed time for my shower (always needs advance planning) for the night out. Blatantly the rest did go back and most of them spotted the monkey despite Pat's exciting shrills. Picture evidence might come later.

Our night out was at Bajan Roots and Rhytms: a variety act with meal included – you know, the standard tourist deal that can either be horrible or loads of fun. Well, this one was definitely worth our time – despite a waitress kept on giving us the evil eye. It started off with some standard introduction on Barbados and the Carribean, but the rum punch kept on flowing freely, as did the ice cubes… The local food we were treated to was great although I don't really remember anymore what it was. Problem was that our week had been so busy, that after dinner we all got tired and during the variety act some dozed off.

Dozing off was unfortunate, as the variety act was of a high standard as well. With some pantomime depicting the history of the island and the Carribean, and great costumes for a carnival act, it did keep me awake. The exciting part was however when members of the audience were invited for a limbo dancing contest. Unfortunately for the other concerts, we made up about 25% of the audience and so could cheer loudest for our friends! To be fair, Timmy G deserved to win with his movements that cannot be described on this blog.

After the limbo and dessert, a live band came on and played all the tunes we love so much magnificently ('Rock the boat!' is the only one I remember – maybe because of the class movement and actions going on). Even though Beth was almost abducted by a too enthusiastic customer, the night was amazing and a worthy introduction to Rick's birthday the next day! Unfortunately, we weren't allowed to take pictures – not that I wanted pics of the show, but everyone was just having such a good time! Ah well, hopefully Top B will ever reach that level (maybe a live band would be a good idea?).

Once we got back I tried to go out again to celebrate Rick's b-day but could hardly stand so decided to go back to the hotel. After a short but nice chill on the beach it was bed time for me for a big day was gonna come!