Can't really remember what I did Thursday morning, but I guess I slept in a bit and played some Ianball. While others went to Bridgetown or for a big lunch at a pub at the beach, I decided once more to listen to the Ribits choir rehearse - this time with 'band'!

Thursday, concert day! The concert was supposed to be our main event – the Ribits choir had already had two performances, one of which was in front of 2000 people (!) in a mini festival with proper gospel choirs from the West Indies. Therefore, everyone was excited as this was what we'd been rehearsing for all term!

I lost track of time during the evening, but it turned out to be as bizarre as I promised earlier. I think we were supposed to start at 8, leaving one hour for sound check for 2 choirs and a band – ah well, we're in Barbados! Eventually, the Ribits choir started their (reduced) set at I believe half eight with 'Eyes on the Prize'. Even though they'd only met for the first time on Saturday and only had 2 or 3 rehearsals since then, and even though Chris wasn't allowed by the 'technicians' to balance the mics and all, they sounded great, and I grooved happily along! 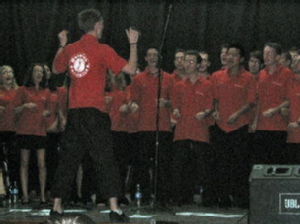 Now, as soon as they were finished, we (the Warwick Revelation choir) took their place on stage and we could see the turn up. Had to look hard though – apart from the 40 people in the Ribits choir, and the 10 people from the Miraclettes (gospel choir that would perform this night as well), there were only 2 people – 2 girls I think I recognized from one of the schools we'd visited – but they left before we started our set (as it was already 9pm). So basically no audience coming especially to see us. But well, we're in Barbados!

Since there was still going to be a DVD on the tour and the concert, and we had worked hard for this moment last term, we decided to enjoy the moment for what it's worth. Didn't need too much to enjoy for the Ribits folks already started grooving once they recognized the chorus for 'Sign me up!'. Again, singin put a smile on my face, and with some encouraging words from Steph I never stopped singing (apart from when I realized I might need my voice later on in life and I noticed that Shaun was loud enough to sing for 2 – got some good complementary singing going on in the tenor section!) and thus smiling.

The response was great, and with a grand finale of joint singing with the Ribits choir ('My Redeemer Lives') it seemed as if most troubles of the week for forgotten. It didn't take away the disappointment, but I'm sure the DVD will look good! It was too late for the Miraclettes to perform as well, but as a nice 'dessert' (though I hadn't had any food for hours) they gave an instant workshop leaving us in awe and with loads of inspiration. I was sitting in another room snacking from some cake and thought it was a CD playing – such quality and powerful voices they have!