The irony is lost on me

And the irony of PSV hero Alex’s links with Chelsea did not escape the beaten Wenger.

The reporting on the PSV – Arsenal matches of the past two weeks has been truly appalling. From Russian mafia conspiracy theories to negative tactics to the worst football product in recent years. And I don’t even read the Sun.

Simple fact: PSV scored more goals than Arsenal (in fact, they scored all goals). You generally don’t advance without scoring a goal. You cannot blame the other team for having a better understanding of this concept.

Here’s another one: PSV, with Valencia, are the only club left in the Champions League not amongst the 20 richest football clubs in Europe. Why? Because it’s not in the Premier League! It might be hard to believe, but football clubs outside the UK tend not to make so much money (one reason is that admission prices are below an average working day salary), and thus don’t have much to spend on the best of the best. Great local talent is snatched away – to be fair, PSV does the same locally, by attracting youngsters from smaller Dutch clubs, but only for them to be lured away by the money making machines elsewhere. And even if you’re lucky on the transfer market, your star player will not stay for more than two years. It’s only a matter of time until Farfan enters the global spotlight.

With restricted means, you have to be clever. Guus Hiddink managed to take PSV to the second round in the Champions League twice in a row with two rather dissimilar teams. He had a slightly more versatile selection than Ronald Koeman is managing this year, so he could be a bit more adventurous, but the big difference with PSV’s game from the 1990s is its serenity. The defence is solid, and with arguably the best goalkeeper in the world, there isn’t a lot of pressure on the team to make the game. And that one goal will come, as we’ve seen twice now.

A report in the Guardian noted more irony: how Arsenal appears to be the last stronghold of the revelled Dutch total football, whereas one cannot get further away from this system than with Dutch champions PSV’s game. Or even worse: how if PSV are the Dutch champions, the quality of the Dutch league must be rather poor. But who is to blame?

PSV manages to get maximum return out of its input. Perhaps it’s a shame it involves “negative tactics” and a star player on loan from a competitor. Perhaps it’s more of a shame it had to resort to such means, forced by the economic ways of the game.

There’s more where that came from!

When the world ends

Sometimes you feel you’ve seen all you need to see before you die. [1] Last night, me and my friend Mikey witnessed a guitar master class, not so much by Dave Matthews, but rather his buddy Tim Reynolds. An Acoustic Evening with Dave Matthews thus became An Acoustic Evening with Dave Matthews and Guitar Magician and One Man Band Tim Reynolds. The following clip is from the Belfast show (we were in Manchester last night), and is a bit blurry, and doesn’t show that much, but I hope you can still recognize Mr Reynolds’ awesomeness! (He’s the guy on the left)

The show was sort of an updated version of what you can hear on Live at Luther College , possibly only interesting for music or guitar students. As we were listening to The Feeling on the way there, I got a bit worried, as Dave’s songs often aren’t as catchy single material, and Dave can get carried away letting his voice hover over the chords, but it was all good: Mikey thought it was more than worth the drive along many roadworks, and now wants the magic distortion box that Tim used.

1 Don’t worry, this is not a suicide note.

As I lay awake

Has the year gone by so swiftly?

But no. A billion people around the world are celebrating new year today. And a few of them are just around the corner from my house to let me know. Thanks. I hope you enjoy it. Goodnight.

Yes, I have noticed the snow. 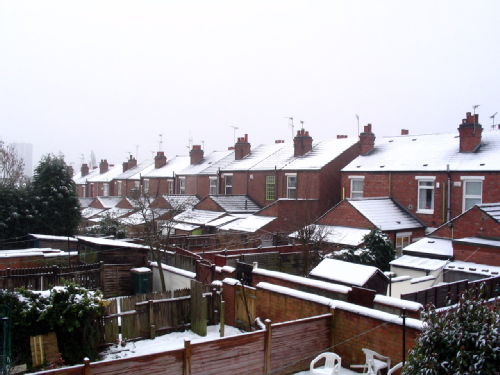 Follow-up to It could be Rotterdam from [TBA]

Feyenoord has been ejected from the UEFA Cup, and here’s what wise man and new UEFA president Michel Platini has to say about it:

This sends out a strong message that acts of violence by fans within the game will be heavily dealt with and punished by the relevant authorities.

A bit of a shame that the message has been delivered to the wrong people. The key word is, as usual, fans, for are those who illegally obtain tickets to football matches, and then end up disrupting the match, really what you would like to call supporters?

I understand the UEFA is not in the easiest position, punishing a club for something it actually could not prevent, but someone needed to be punished. But then to declare that justice has been served is a complete farce, and creates sympathy for the big clubs who want to break away from this archaic institution with its maze of fictional rules and regulations.

You will be sadly missed

Follow-up to Impulse from [TBA]

That’s the tagline on my latest temptation to keep me from my PhD: the Six Feet Under complete DVD collection. It looks stunning and murky, just like the show! Got to prepare my class for tomorrow though, but lots of dark fun will be had in the next few weeks!

I just spent a load of money on a boxset of one of the best TV shows ever broadcast. And this is after I received the first series of The Sopranos this morning.

To make me feel better I’m planning to spend the whole weekend reading up on cloud physics and parallel programming.

Sometimes I wonder whether my cells were leftovers and outcasts and decided the only way to survive was to form me.

Honestly, country music is a goldmine! The easy rhythm helps me get into a steady workpace too! Anyway – here are the lovely lyrics to Jason Aldean’s very catchy Amarillo Sky:

He just takes the tractor another round
An’ pulls the plow across the ground
And sends up another prayer
He says: “Lord, I never complain, I never ask: ‘Why?’
“Please don’t let my dreams run dry
“Underneath, underneath this Amarillo Sky”

That hail storm back in ‘83
Sure did take a toll on his family
But he stayed strong and carried on
Just like his Dad and Granddad did before him
On his knees every night
He prays: “Please let my crops and children grow”
‘Cause that’s all he’s ever known

He just takes the tractor another round
An’ pulls the plow across the ground
And sends up another prayer
He says: “Lord, I never complain, I never ask: ‘Why?’
“Please don’t let my dreams run dry
“Underneath, underneath this Amarillo Sky”

It could be Rotterdam

i think they should throw the whole of holland out of all competitions. I t was good enough for the english in 1985 when those liverpool fans went on their rampage so it must be good enough for everyone else.
Ian
Evertonian

Sometimes I wonder if internet access to the general public is desirable.

If a club warns their competitor hooligans are on their way, acquiring illegal tickets on the streets, and the other ignores the warnings, who is to blame? In this way, a club could even be intentionally negligent and admit hooligans – supposedly the opponent’s supporters – thus causing the opponent to be expelled from the competition.

I wonder what spurred UEFA’s turnaround…