A Tribute to an old GoOoner

Having just sobered up after the young gunners did an excellent job spanking the old lad, my thoughts are distracted away from the glory of the moment by the glory of the past. An arsenal fan, obviously a very good friend of mine, was rejoicing over the ironic situation in which our old boy Patrick finds himself in. He left Arsenal for Juventus seeking to boost his chance of concurring Europe.

It is an Irony, isnt? Tempted, just for a second, to place a satisfied little grin on my face.
But how can I? Patrick is an Arsenal Legend. Nine of his best years spent serving Arsenal. He led the troops to titles, cups and that famous little run unbeaten for 49 games. 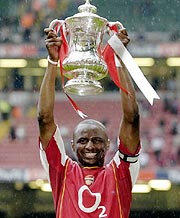 Come to think about it now, it would be more of an irony if Arsenal goes all the way in Europe this season. I really feel sorry for him. Not the matter, Patrick is a goOoner through and through, and will always be our old boy.