Whereas most organisations tend to have their general enquiries email addresses, or even general department email addresses as something like enquiries@blahblah.com, or admissions@blahblah.com, I noticed this morning that Anglia Ruskin University (formerly APU) have set their general enquiries address as "answers@apu.ac.uk". A nice touch to suggest proactive communications and to imply that your email to them will be answered and not just lost or passed around the houses.

A friend recently asked a group of us for some tips on overcoming presentation nerves. Improving my own presentation skills was something that I had set myself as a CPD target for this year, and something that I have put some degree of effort into, although I guess really there’s nothing that quite compares to practice and experience. She received the usual suggestions, including imagining the audience naked and having a stiff drink beforehand. While presenting to an audience of 100 Swedes earlier this year, I also learned the value of having an audience that doesn’t speak your language as their mother tongue, thus forcing you to slow the pace down and be more concise, when the nerves are naturally trying to make you rush through the whole thing.

So, seeing as Warwick University is a community full of experienced presenters, I thought I’d throw the question open here and see what other tips I could gather, for the benefit of my friend and myself!

Just on the train now on my way back to Coventry after working in London all day. Had lunch with one of our producers in a rather nice restaurant called Moro – about 5 mins walk from Angel tube station. I had the pork, which was particularly delicious. However, while ravenously enjoying the pork, I had the dilemma of whether it is polite and correct to eat the crackling or not whilst at lunch with colleagues! On the one hand, the pork was excellently cooked and surely it would be rude and insulting to the chef not to eat what is typically accepted as the best bit of roast pork. On the other hand, is it rude to my colleagues and fellow diners to seat there crunching away, unable to participate in the flow of conversation as I gorge on hardened pig? Then, of course, there is also the risk of trying to cut into a piece of crackling and having it scoot off of the plate onto someone else’s lap. Given my track record, there was a high probability of this happening!

I decided to compromise and take a polite and discreet nibble (as discreet as one nibbling crackling can be!!) and left the rest, much to my dismay. I wish I didn’t feel the need to think of these things and had just tucked into it anyway.

I'm not one for reading about politics, or even for reading autobiographies. However, when someone bought Christopher Meyer's DC Confidential for my partner as a gift, I snapped at the chance to read it first!

It's been a few months in the reading, and I found it a little slow to get going with, but Meyer's easy–style and comic anecdotes make it a worthwhile read. It's pitched as being controversial, but I can't say that he reveals a great deal that we either wouldn't have already known or suspected. Likewise, the chaper on 9/11 doesn't tell us a great deal – but then I guess that's to be expected given the global media coverage of it nevertheless. The chapters to follow this, however, are an entirely different matter giving a unique and, I would say, well–balanced insight into UK–US relations.

His background in PR and speechwriting shows through – Meyer is an excellent story–teller, and it's really the style and tone that make this book as opposed to any controversial revelations.

We've just invested in a rather nice new camera. We don't really know what we're doing with it yet, but here's just one of the gorgeous "mucking around" photos that Nathan's taken already. Not bad, hey? 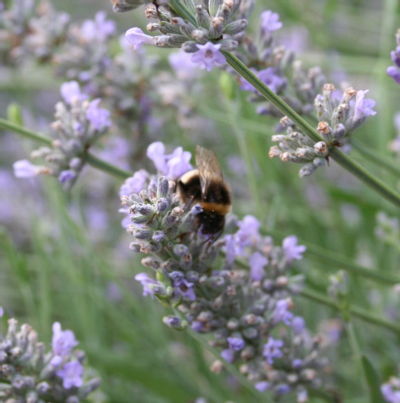 Enjoying a little joke with my nephew Gabriele on Theresa's roof terrace in Rome. He's a lovely little man – so well behaved! Note the baby puke on my left shoulder though! Nice!

Nath and I went to buy a new car yesterday. Can't wait for the 2nd Sept when we can collect it. It's a Seat Leon special edition – air con, tinted windows, rear parking sensors, cd player, alloy wheels, zenith grey. Very sexy!!! I can finally wave goodbye to my dear old Rover. Not getting the new one until the beginning of Sept so that it can be a 56 registration, instead of an 06. We could have had it earlier but thought it worth waiting a couple of extra weeks to get the 56 plate.

Yesterday was dominated by attending the Warwick Network. This appears to be the first time (at least, the first time in my 4 years of being here) that Warwick has organised an event like this. And about time too in my opinion! It was great to have the opportunity to mix with other admin staff in the University that we wouldn't ordinarily speak too, and to have the opportunity to speak our minds, brainstorm ideas and, quite frankly, just be made to feel part of the University community again. Well done to those that thought up the idea and made it happen! I'm really looking forward to discussing and thinking about a whole new set of issues at next year's event (and to seeing more diverse groups of staff there too).

Of course the event had a few flaws, but what conference doesn't? Bill Morris was excellent though. What a top bloke!

Can't believe it's been over a month since my last post. I really should get better at this, shouldn't I?!

We went to Rome again this weekend. We were out there for Gabriele's christening. The last 2 times we went to Rome we stayed with Theresa and Gerard in their apartment but given that they had loads of people descending on them this weekend, we opted for a hotel in the city centre instead.

We stayed at the hotel Quisisana. It's only 100m from the central train station in the city, so in a good location. The rooms were okay – a little shabby, but clean and tidy enough. The air conditioning was a real blessing as it was scorching in the City!

We managed to get in some great sight seeing on Saturday. We climbed to the top of St Peter's dome – I highly recommend this but it's not for the faint–hearted – it's a 510 step climb and towards the top the stair–wells are very narrow indeed. Don't do it if you're scared of heights, claustrophobic, or just generally very unfit. Also, between 3 of us we got through about 2 litres of water just on the trip to the top.

We also visited the Castle of St.Angelo (I think that's the correct name!). It's a stone's throw from the Vatican, with a direct escape route for the pope to run from the Vatican to the castle in times of attack! There's quite a lot to see there too, and the views are pretty good too (though nothing compared to standing on top of St Peter's dome).

We then went back to the Pantheon, where we've been before, for a quick peek in. It's free to get in but heaving with tourists, so we didn't stay long. Besides, we'd seen it before. Then a short walk via the beautiful Trevi Fountain (again, somewhere we've already been a couple of times before), too us to the Colleseum. We've only ever visited the outside of the Colleseum on previous visits so it was good to go inside, even though I do think the outside is far more impressive than the inside! I didn't think it was really worth the 12 or 13 euro entrance fee, which is pretty expensive compared to other attractions in Rome.

Nath' and I went to a fab restaurant just off the termini–station end of Via Nazionale (first turning on the right if you're walking down the road). It's called Target and serves the most delicious food. We had lobster for our primi course – I can highly recommend this – it was delicious (and a little messy!). 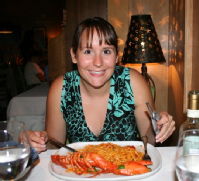 Sunday was dominated by Gabriele's christening. He was as good as gold, sleeping through the entire service. He's such a gorgeous little chap. I'm really pleased that Theresa and Gerard will be moving back to the UK in 3 weeks time – hopefully I'll be able to get some quality time with my gorgeous nephew before they leave for India and Australia (their next overseas posting!).

A colleague sent me the link to this article after I had been whinging about the number of distractions and interruptions I had to my normal working week last week. How ironic that the first thing I did was dropped everything I was working on to read it!

Now, I wonder how many people might read this entry and click straight through to the article too – after a little afternoon distraction, perhaps? (PS I'm on my lunch break now!!)