Let’s put to one side Bristol’s capitulation in the last minutes yesterday to snatch a draw from the jaws of victory.

Instead, let us marvel at the interview footage of Gary Johnson in the video on the BBC website:

He either looks like he’s a naughty school boy being told off by the headmaster or that two blokes are about to take him outside and do him one for non-payment of gambling debts.

Not a leading Championship manager at all!

Perhaps in this age of ubiquitous video capture and distribution the Bristol City PR people might like to think about how they physically arrange these press briefings so that GJ (still believe in you btw!) doesn’t look like a numpty.

Follow-up to Dear Mr Warnock from Contemplating the Frame

And now I’ll be celebrating in the stands at Wembley. 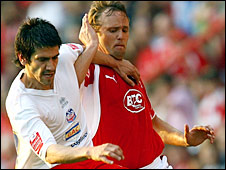 Can we celebrate now please?

Quite possibly the most interesting year for the FA cup in oooh, i don’t know how long.

The semis don’t disappoint either.

West Brom at home have every chance of beating Portsmouth and we might just see a final with no top flight team in it.

Not sure what this says about:

a)the quality of the lower leagues
b)whether premierships clubs are bothered with the FA cup.

Anyhoo – according to the BBC this will be the first year since 1995 that someone other than Arsenal, Man U, Liverpool or Chelsea has won the FA Cup.

Hearing that suddenly makes you realise how bloody dull English Football actually is.

The worst idea in football (ever)

No, really, has the Premier League lost its collective mind?

The craziness of inflated prices for Premiership players 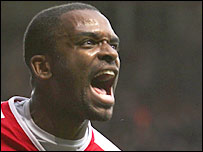 Whereas this man is worth £16.1 million. 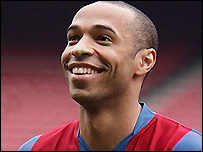 No, seriously – does anybody, anywhere get that?

Here’s something we did with the new biped robots the Warwick Robot Football team got their hands on.

They are pretty smart little robots – the cartwheel is awesome, but the actuall football playing is a bit … slow?

After years of falling at the last…

Year after year we’ve seemed to fail at the last hurdle, but this year they made it on the last day, and in some style too.

After the Milwall result I did wonder…

Lucky for whoever made this banner that they did win. You’d feel a right plonker if they’d lost. 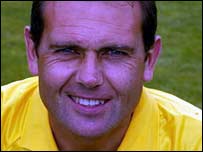 England fans – who do you fear?

So, we are into the second round of group stage games. Having seen all the teams in the competition who do England fans fear – who looks like a contender?

On current performance I think England have a lot to be worried about. There are quite a few teams with more pace and purpose than us at the moment. If we can't find a way to let our midfield boss the game then I fear for the worst.

I worry about Ecuador who look pretty tough – more resiliant than Germany, though would you want to play the Germans on their home turf?

Spain look pretty hot as do the Czechs. As for France and Brazil – BRING 'EM ON!

Seriously though – this is looking like the most open and competative world cup in years. It is also the most attacking, though it saddens me that England seem to be playing the defensive minded game more commonly associated with the Italians of the 80s and 90s rather than the expansive fast game we know and love.

A note on Rooney and why he is so important (and Lennon too) – the T&T coach said at half time that the England movement was very predictable. This is the problem with Crouch and Owen at the moment – they run in straight predictable lines, staying in the channels. This is easy for defenders to deal with.

Rooney runs across defenses and moves in a way that pulls people out of position – he is a lot less predictable and creates spaces for the likes of Beckham, Lampard and Gerrard to do their thang. Lennon did the same thing, pulling the T&T defense towards the corner and giving both Beckham and Gerrard the space and time to make an impact.

You have to be disruptive at this level – disruption and confusion is what creates opportunity. Predictable lines and pedestrian pace is all too easy to defend against.

And just to pimp my podcast sideline a little – link

I think I might go back to Henry after the group stage and see how his predictions stack up – France and Brazil not looking so hot now huh!