The Citizen asked the Governor…

This post is inspired by a quick exchange I witnessed on Twitter on December 7, 2012, between a Nigerian citizen and a Northern state governor in Nigeria, Governor Aliyu Wamakko.
To me, it is a very potent illustration of what I would like to describe as the democratic digital public sphere.
The prelude to this exchange is this: 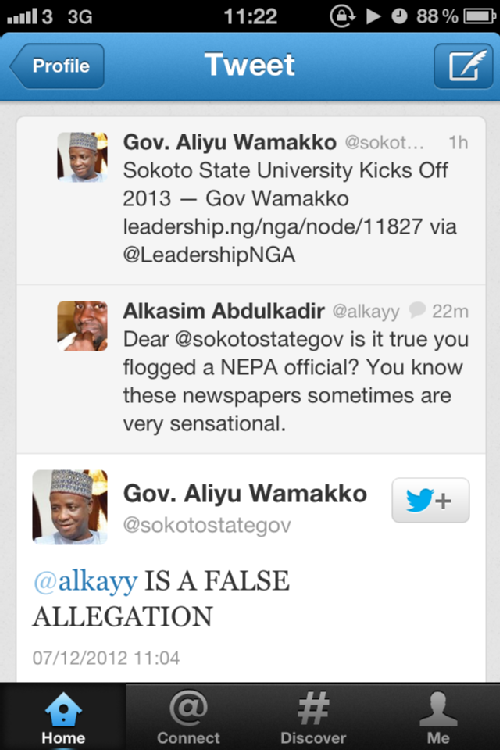 On October 23rd, 2012, news organisations in Nigeria carried reports that the Sokoto State governor Wamakko, allegedly flogged a PHCN manager for failure to supply power to his community. Some of the news organisations include, PM News, Osun Defender, Nigerian Tribune to mention a few.
The Nigerian blogosphere, citizen media were not to be left out of the sensation. Forums like the Nigerian Village Square, Linda Ikeji's blog, NairaLand, made this a topic of discussion. Members of Nigeria's digital sphere discussed the issue inside-out online (see comments section of hyperlinks).
Nigerian blogosphere is not a new development, it is indeed a growing community. However, what's new is the gradual openness of public officials to relate with citizens online. Public policy is not quite certain how handle itself in the digital sphere.
America has been more adventurous about this idea.

The following points struck me about the exchange between Alkay and Wamakko:
As Douglas Kellner puts it, after old media have failed in their democratic functions of informing the populace, asking the right questions with the right analysis and generating genuine public opinion for the state to act on, "new media technologies such as the Internet are...serving as a new basis for participatory democratic communication politics."
It is not my concern here whether Governor Wamakko is speaking the truth or otherwise. When Nigeria's digital public sphere develops to the point where public officials are willing to engage with citizens directly online in order to access public opinion, the fledgling democracy would mark a milestone on the way to recovery.
I am aware that there are many questions heralding that position. For instance, how many Nigerians are online, how public (of general interest) would the opinion generated be...?
These and more questions I ask myself as I go on this research journey.