A question in a job application form stimulates much thoughts – the question was asking 'what do you think will be the most significant development or innovation to affect the way we live during the rest of this century?'. Pretty interesting question, shall I say, for job application, huh? So here comes the possible answers that have come through my mind:

[Note: this entry requires a bit of background knowledge about Japanese S/F anime]

method of joining one point of space/time with another. In other words we will be able to access any space/time point at our wish. Time traveling and space traveling will become as easy as open a door. Definitely a historic milestone for mankind but unlikely to be achieved within this century I guess.

I would say it's somewhat similar to the first one. Space creation is the creation of a 'virtual' fourth dimension space, unlimited in size. In that way all the spatial problem that we are currently facing will evaporate, and we will have unlimited farmland (if you can find a sun and some water in that dimension) that will able to feed everyone – although it is quite clear that we are already producing enough food to feed everyone – world hunger is a distributional problem rather than a production problem (Sen, 1981; Germov and Williams, 1999). And you can predict what impact it would make to the worldwide housing market – so even such technology is discovered it is more likely to be used in building 100+ holes golf course rather than houses for the poor. Hmm…

So you all know what I am referring to, huh? Quite unlike the concept in Yoshiyuki Tomino's mind actually. It is a new type of human being whom have made important progress with regards to the use of their mental power. They will be able to communicate with each other and control objects using their mental power, brain wave or something-like-that. Clearly that doesn't make them necessarily good pilot (of MS/MA) and the idea is more close to the one Sir A.C. Clarke made in his various works, powerfully manifested in 'Childhood's End'. The ability to control object by mental power is, obviously quite a terrifying one – below is an illustration of a New Type controlling and shooting pencils at someone else…you can tell she must be pretty frustrated… 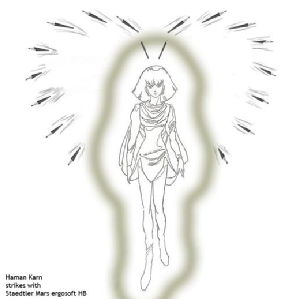 Defined as 'a human who has certain physiological processes aided or controlled by mechanical or electronic devices'. It may take the form of the transplantation of mechanical organs, as a response to injury or needs to work under particular condition. Further develop down this line we can have the existence of virtual society, where one's psyche is separate from the body – somewhat like the Matrix world, put in simply. Nothing new, really.

How can I miss this? This latest version of slavery, more compatible with the enlighten notion of equality, committed to serve the noblest and the most undignified wants of human being, will bring a whole new level of potential to human society – they can be used as a threat to union movement, the perfect tools to repress those bloody activists who dare to challenge authority of what-so-ever, to be raped by the master (that's what slaves do, man), and miniaturized robots would be the ultimate marketing (and social control) apparatus – they can hide in your hair and record your purchasing pattern and thus allowing the company to send you all those useful information specifically cater to your needs. Brilliant. And most importantly, as we human being discover such a new 'otherness' to be exploited we may forget all the prejudice and discrimination we have towards our fellow human. Why oppress the blacks when we can do whatever we want with the robos?

Such name is clearly misplaced – a colony without something/someone to be colonized (and thereby civilized them through killing, raping and exploitation) doesn't justify the name of colony. But no matter what the name it is, it will be an important achievement to settle in space – it will be the gateway to the stars as well as a new outlet for all the discontented and adventurous youth.

'Please be more realistic,' you say. 'Alright then.' I'll give you an extremely useful gadget : self-cleaning material that can be used on dishes, carpets, wallpaper…virtually everything. Using biotechnology a specifically engineered micro-organism will eats up all the stains and dirty stuff and release oxygen. The words cleaning and washing up will disappear forever. If you think it is too trivial to be a milestone and history, then you are neglecting the experiences of numerous domestic workers and housewives.

So after all these fascinating ideas you must be wondering what did I put down in the form. The answer: safe, miniaturized nuclear fusion reactor. The reason? I prefer not to entertain the HR people who design such question.