I am on my way to Vienna from Graz. As I plan to depart from Vienna to Graz Airport tomorrow, I said bye to Graz, the City of Design. I bought an one-way train ticket at 33.70 Euro. Taking a train instead of coach/bus was highly recommended by the host of the Workshop of 80 Days Consortium. He said the railway journey is a UNESCO World Heritage: the first railway on the mountain. This railway reminds me of the tour in Switzerland last year in April. I can still vividly remember the fascinating sceneries of Switzerland, and what I am seeing now is very much alike: mountains with snow, authentic countryside with fairly-tale like houses. Even the train ticket is very similar—with German that I cannot understand.

Going to Vienna is like a dream. Like the experience to Geneva last year, I never imagined that I would have the chance to visit Vienna before I landed on the UK in March 2008. In my old house in Malaysia, I kept a series of calendar-posters which depict European sceneries when I was a teenager. I always dreamt of visiting these places since then. And now I am realizing my dreams, one after another.

Due to the nature of this journey, which is meant for attending a conference and a workshop, I travel alone. Language was a barrier but English plus body language keep me at ease. The best thing about being alone is the maximum flexibility. I have to admit that I am tagged as a well-planned person, but not when I am having holidays. Like now, I don’t know where am I going and what will I do when I reach Vienna later. The good thing about flexible is that when I hungry I eat; when I feel like taking photo, I take photos; when I discover a museum that I feel like visiting, I visit, etc. To be frank, it is not easy to be flexible—I need at least a healthy body + sufficient financial capability to be flexible. And I am really grateful that I have both at this moment.

I am not a food-fancier but in Graz, I was fortunate to taste all kinds of authentic Styrian food: typical food of Austrian students in the FH JOANNEUM University of Applied Science; Mid-range/ splurge food at Hotel Daniel, Hotel Das Weitzer and SchloBBerg-Restaurant (at the Clock Tower). To balance the feeling of being a humble student, I had Doner Kebap when there is no arranged meal.

I am on my way back to the UK. The train passed through Alps again, and I am trying to record my memory in Vienna.

Vienna is a beautiful city, no doubt though the weather didn’t seem to be very friendly.

There were combinations of snow, rain plus strong wind throughout my stay. Here I have problems to communicate, most of the people I asked for direction didn’t know English. What’s worse, I thought I understood German! Because of this, I was looking for the Wombat Hostel under rain with my luggage for one hour, and the actual walking distance should be 15 minutes.

As I knew I have only one day, the least I can do is to visit a museum and watch a concert or performance, therefore I made my visit relaxing. After analysing the transportation network in Vienna—interconnected tram, train and underground networks, I started my adventure by going to the Parliament Building. I met an Australian who lost her camera after she visited some of the famous tourism spots. She bought a new camera to re-take photos in Vienna. We felt good to meet people who can understand English, and helped each other to take photos in turns.

The rain got heavier, I ran to the National Library of Austria which was part of the Imperial Palace. I visited the museum inside the palace which holds three types of exhibits: musical instruments, weapons, and the ruins of Ephesos. Next, I visited the Natural History Museum. I was impressed by the magnificent collections of minerals in this museum. Also, I saw the Venus of Willendoft, the earliest known human sculpture.

In the evening, I watched a concert-like performance at 1, Beethovenplatz. The performance featured the works of Mozart, Beethoven and Johann Strauss. It was designed for tourists, thus it combined talk-show, concerto, opera, ballet and symphony orchestra. The acoustic was great and if I am not mistaken, this concert hall was used for performances dedicated to the imperial family.

So I did manage to accomplish what I wanted to do without proper planning and gained a happy and interesting experience.

I joined the tour to Salisbury and Stonehenge, organised by the International Office on 10 May 08. I stayed in a hostel located in Sursee, Switzerland on 15/4 and 16/4. The attitude and behaviours towards environmental protection shown by the lady boss of the hostel, greatly impressed me.

According to her, Swiss voluntarily work for environmental protection since their primary school time. They collect old newspaper in the form of donation. Whenever they are aware of a particular method or product which can help in saving our Mother Earth, Swiss are willing to spend money for installation or to practice the proposed method. Regardless of the economic benefits gain or loss; as long as there is some or even little contribution towards environmental protection, they are more than happy to support.

What a respectful Swiss, bravo!

I visited Chipping Camden this afternoon. This trip is organised by International Office, University of Warwick.

We had an unguided tour around the town then we were invited to the house of Mrs Angela Stancer (a graduate of Warwick) for a tea party. The weather was very nice and we had a very happy experience of English hospitality. 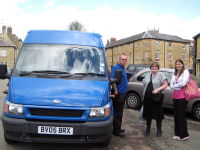