Follow-up to What a fantastic evening! from Steve's blog

Goog music. Good atmosphere. Spectacular fireworks to finish. What more could you want? Another good evening to end the year, and as last year I've heard many good comments from local residents. I'm sure they enjoyed it and appreciate the University running the event and inviting them.

Since we've now done it two years running, and there was nothing particularly special about 2006, is this an indication that it is going to be an annual event? I hope so.

I do have one gripe and one suggestion:

Finally, a photographic contribution. I didn't do much with the camera at last night's concert. I was with other people and couldn't really wander around to get a good vantage point for shots of the stage. Instead I went for the atmospheric shots and ended up with this: 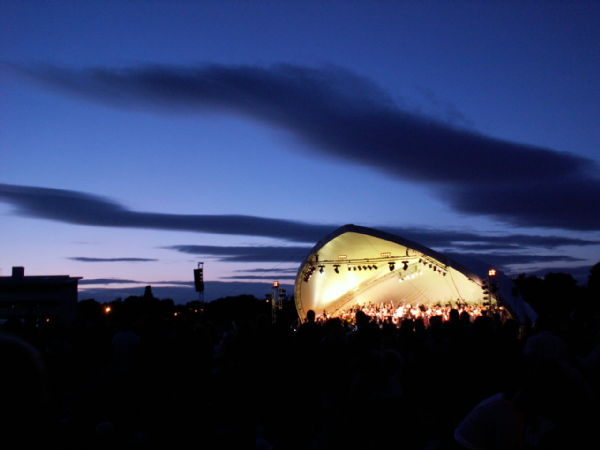 The contrast of the lit stage with the clould formations was what appealed about this one. It was taken towards the end, just before 10:30pm.

I have a video of the fireworks that I'll link to when I can. Since it is a 150MB file I'm having to wait for it to be accepted by Google Video – I don't have anywhere else to host a file that big! Watch this space…