Looks like we're going to get another gala concert this year, like the one for the 40th anniversay last year. Excellent. That was such a good event I was hoping they'd give it another go. I wasn't expecting another so soon, but it would be brilliant if this turns into an annual event. It brought a lot of local people onto campus, and all of the non-Warwick people I spoke to enjoyed it immensely. I'm sure it was good for Warwick's reputation in the local community. And, of course, it was good fun for Warwick staff and students too! Can't wait.

Let's just hope the weather is alright on the night…

First excursion of the year 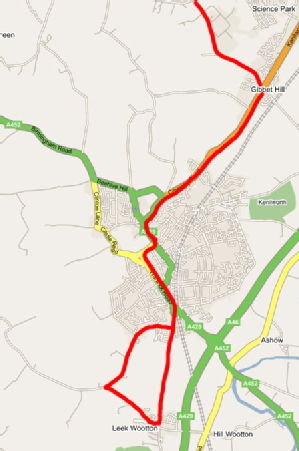 I wasn't really expecting to start my lunchtime excursions until much later in the year. Last year my first excursion was April 22nd. But today I just felt like getting out for some fresh air, so off I went. And for the new year, a new route, heading further south than I have been in the past, through Kenilworth to Leek Wooton and back.

Actually, you can't currently follow the route indicated here, because of the roadworks on Coventry road. Instead you have to fiddle about down Tainters Hill and Albion Street, but I left that out for simplicity! I guess the indicated route might be a little faster, but not really any shorter?

There's potential for a more interesting return, via Burton Green and/or Balsall Common, but I wasn't feeling that enthusiastic, and anyway I'm still a bit slow after my extended break from cycling at the end of last year. This route was 12.9 miles and took 61 minutes, for an average of 12.6mph. Not bad, but I'm always disappointed when my average for a longish route is below 13mph. Those are certainly potential extensions of the route for an extended commute in the morning, when I can arrange to get out of the house early. And when it is much lighter in the mornings…