AS Development skills sharing at Warwick

Chris was talking today about intra-team/department skills sharing, which I think is a great idea. With regard to Flash and Flex development at Warwick we’ve recently embarked on something along these lines, with the formation of a University Flash and Flex developers group consisting of people actively using (or just interested in) Actionscript development. It started with a forum that was initially populated with ITS people (plus one or two others), but since starting to deliver some Flash courses for ITS Training I wanted to maintain contact with what attendees did with the skills they’d acquired after the course, and the forum was opened up to allow more people to contribute. We held the first ‘skills session’ a couple of weeks ago, in the Teaching Grid. It was purposely an informal gathering, consisting of developers from ITS and departments, plus lots of coffee and biscuits. The session was an opportunity for everyone to show what they’d been working on and share expertise and a mix of ongoing Flash, Flex and AIR projects were demonstrated, plus discussion on development approaches and potential applications in the future.

Overall I thought it went well (we ran out of time in the end) and although next time some structure to the session might help us cover ground more efficiently, the informality and range of projects kept it interesting, and it was especially good to share ideas with others while receiving questions and feedback. As a result of the session, I’ve been asked to present a more formal hour-long session on AIR to the CIS Team next week, which I think I’ll prepare some slides for.

Anyway, my point is that personally I found it quite fun/rewarding to find out what other people were doing or planning to do with the technology, and to see and discuss approaches/methodologies and alternatives; we should definitely do more of this kind of thing in future. Time will tell whether we maintain the Flash/Flex/AIR group sessions but I hope we can.

Fantastic news – actually something that may have been lost in the noise here is that it seems like AIR is definitely coming to devices. Allowing access to the SWF specifications is a major step for Adobe. Kevin Lynch of Adobe describes the rationale behind OSP in this video.

This is a bit annoying – we’d planned to use a number of EEE PCs with our Flash-based media streaming applications for a new kiosk-based project, and after some spectacularly unsuccessful tests today with an EEE PC and a range of webcams (including the built-in one) it seems that the problem is with Flash itself – it only supports VideoForLinux (V4L) and not the current V4L Level 2. V4L was removed from the Linux kernel way back in 2006 so I was surprised to find that V4L L2 isn’t there in Flash Player 9.

Apart from the EEE PC, this also discounts an number of other potential devices like the N800/810 and we’ll have to look at Windows UMPCs instead (which is likely to severely impact the budget), or alternatively install Windows on the EEEs (which is a hassle).

I agree with Aral – there’s an explosion of ultra-mobile, Linux-based devices out there now with webcams that could be used to enable video and audio-based communications and blogging, but at the moment we can’t lever them in Flash, and that’s a shame.

Wish I could embed the full example here, but I’ve just been looking at these awesome examples by Quentin Lengelé of combining footage shot with a 360degree camera, a 3DSMax ASE sphere model and Papervision 3D to create a fully 3-dimensional video experience (the original footage is by Immersive Media, who now also offer the same kind of thing commercially in a Flash-based player, lots of other demos on the link). Wish I could come up with this kind of stuff… 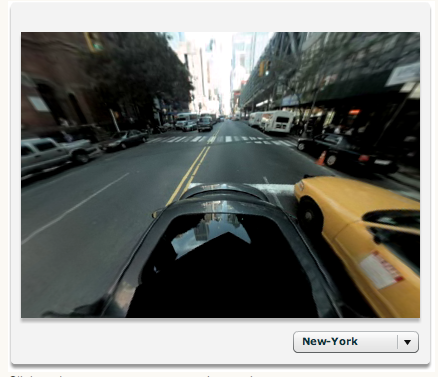 See that little button over there on my sidebar? My blog is now included in the Adobe News Aggregator service, which is fantastic. I’ve been reading MXNA for years and it’s been my primary source of information on all things Flex, Flash and AIR. Hopefully now I’ll be able to actively contribute to a community that has provided me with insight and Actionscript skills over the years.