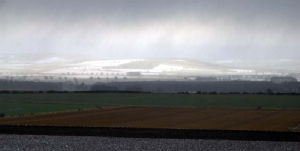 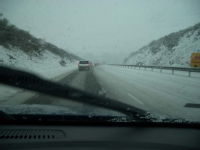 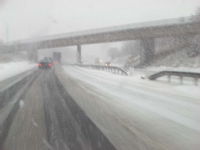 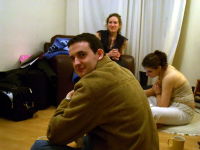 A little late (I've been away) but RIP to a very talented sportsman with a controversial lifestyle very typical of sporting megastars of his era (witness also James Hunt, F1 world champion). A man whose death was long expected – I could almost say deliciously anticipated, by some of the media – and has been publically mourned. This entry isn't about him.

You'll probably have missed it, what with all the front pages, back pages and souvenir pull-outs in the papers in the last couple of days, but Britain has lost another sporting hero far more tragically this weekend, and it happened with barely a trace of coverage. Richard Burns, the first and only Englishman to win the World Rally Championship, passed away over the weekend, aged 34.

Burns had become the youngest ever winner of the British Rally Championship in 1993 with Subaru and entered his first WRC rally in 1998 with Mitsubishi. He rejoined Subaru, coming second in the World Championship in 1999 and 2000, before winning the title at the final round of the 2001 season, the Rally of Great Britain. (I was there, in my first year at Warwick, marshalling on Special Stage 6 with the Motorsport club).

He joined Peugeot as World Champion but, despite not winning a rally with them in 2002 or 2003, was within 5 points of the championship leader going into the final round, Rally GB, of the 2003 season. Driving himself to Cardiff in his road car a couple of days before the rally started, Burns passed out. After extensive tests, he was diagnosed with a form of brain tumour and prevented from competing again. Months of radiotherapy and chemotherapy looked to have helped him make a partial recovery, but his condition deteriorated again and even brain surgery earlier this year could not save him.

Family and competitors' tributes have spoken of a very gifted and intelligent competitive driver, a sharp wit and a man whose attitude in coping with a terrible illness was inspirational. May he rest in peace. Off for a bit

No sooner returned than off again! I've not been anywhere up until now (except away from the blogs), but tomorrow I'm off to Scotland on a site visit to a nice open, windswept location near Dundee for a couple of days.

Scotland, you say? At the end of November? Windswept? What could possibly go wrong? Check out that 46 mph northerly wind! Nice. Enough windchill for sleet in Portsmouth and Cornwall, never mind somewhere a couple of hours north of Edinburgh. It's gonna be coooold!

This is why phone keypad lock was developed, children. See my Sent Messages folder today: A confused potentiometer salesman I had dealings with last year for Formula Student is probably wondering why Kenneth Williams sent him a text at 9:00 this morning. It was my jacket's fault, honest guv.

One year old (and a few days)

Happy birthday to this little creation.
Hoping all the hours it's taken are somehow still worthwhile.

Cheers to those who sent a kind word after my post last week. The second half of the week got a lot, lot better as my workload improved and intensified (including having to drive 140 miles to a meeting, and back again; I enjoy driving, especially when being paid!) and I managed to meet up with some friends a couple of evenings.

Tomorrow's my fourth (maybe fifth) attempt to meet up with a Scottish friend from Warwick, who's working in my obscure commuter town down south. Excellent that we're so close, a shame we're both so busy! More photo society meetings are scheduled and hopefully I'll be seeing another couple of mates in the week. Then I'm off on a site visit to mid-Scotland next week, so I finally took the plunge and bought the iPod I've been promising myself for ages. Life is looking a little more funner.

Everyone's had the email which uses the metaphor of cow ownership to explain various systems of government. A typical email might include examples like:

But stumbling across Uncyclopedia (an awesome waste of time - it's like Wikipedia but... not. Go look.), I happened upon a page called You_have_two_cows. It's by far the longest list of variations on a single joke I've ever seen. Including (but by no means limited to):

Tags: Funny Unless You Are Mat | The big change is the design of the rear wing, to let cars follow one another much more closely and hence, hopefully, get a lot more overtaking. Slick tyres should make a comeback too!

The principle is to massively improve the ratio of mechanical grip (from the tyres) to aerodynamic grip (from the wings) – at the moment, aerodynamics disrupt the airflow so much that a car loses loads of front grip if it gets anywhere near a car in front. CFD simulations (see pic below) show the centreline air-pressure profile of the new rear-wing regulations – bottom – as much better than the current – top – one. If you're not technically-minded, trust me, it does.

With these regs, F1 should actually stand a chance of seeing some more overtaking again!