Follow-up to A return to motorsport from Syncspeed

I posted yesterday about RBB Economics Racing's attack on the Club 100 Intermediate championship. Here's a rundown of the team's three drivers.

Dan works for RBB Economics; his company is sponsoring the team's efforts this year to a modest degree, hence our team name. I met Dan three years ago – he was at Warwick on a one-year postgraduate course in 2002/03 and raced in the BUKC on a couple of occasions.

Since then, Dan has done a few Club 100 events, including a full season with Club 100 (in their now-dead City Challenge championship). Two of those races were with me as his team-mate: we came second and fifth, the former being his best result towards an overall third place. The winners of that year's championship are now racing in the Premier class.

Dan's probably a tenth or two per lap quicker than me around most circuits, but not always as keen to take a risk in traffic. It kind of balances out.

I got to know Pete through BUKC too: he captained Kingston's uni team last year. Kingston had a reputation within the championship for being a bit nuts, very fun-loving, and always up for a laugh. That said, they had some very quick drivers, Pete included. Pete nearly won his first BUKC sprint race the same day I did, but ended up winning a couple of weeks later - although perhaps it should have been me that race again!

I'm not sure exactly what level of experience Pete has, but I know he's also done a fair bit of racing in twin-engine prokarts. This has included a couple of Kingston's races at the legendary 24 hour race held at Spa-Francorchamps' kart track, and some other successes too.

Pete's definitely our quickest and most consistent driver, even if it wasn't him who set the best time at our recent test session.

And then there's me! Not really having done any racing before uni, I found myself to be quick in indoor karts (helped by my low weight) and in outdoor prokarts etc, including a good showing at the 2003 Varsity prokart meeting. This wasn't reflected in my early Club 100 experience though: 8 seconds off the pace at a cold and damp test day at Buckmore, and several spins in both my races of the 2003 season.

2004 started with a race alongside Dan (mentioned above) and a good second place against Loughborough's finest at a pre-BUKC event. My four BUKC rounds that year were still poor, with no top-10 finishes and a few more spins, but my pace was improving – thanks in part to buying my own helmet and a seat insert which stopped me being thrown around when cornering, dramatically improving my "feel" for what the kart was doing.

The '05 BUKC season saw me up another three steps in terms of pace. I won a race and was a regular A-team driver. I also helped win the BUKC O-Plate race for Warwick, which allows us to use 0 as our race number this year, and drove Warwick's incredibly fast Formula Student car in competition. After setting RBB's quickest time at our test session this month, I'm looking forward to showing some speed and picking up even more in the coming season. I'm sure everyone recognises this – received wisdom is that it shows two penguins kissing. What do you make of it? 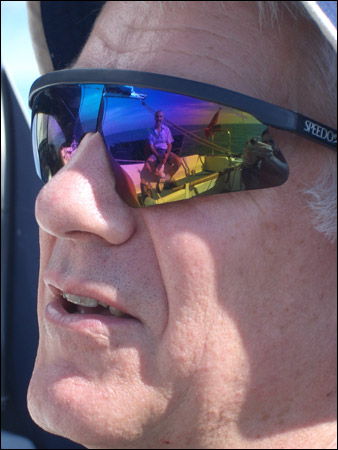 My godfather (and, reflected, my Dad and I) sailing across the Solent. The picture really needs that nasty bright patch in the top-left corner to be darkened down a bit – easily done, I've just not got around to it! Despite being quite late for work, I had to stop for a few photos of this incredible frosted rose in the back garden. The shot was handheld – I was really pleased with the sharpness of focus. Shadows of myself and a friend projected on to the beach below us, in a little town outside Dunedin, New Zealand. I like to think there's something ethereal about the image, but at the same time strangely comforting. It's quite an abstract picture.

No posts for ages – only one so far this year, in fact. Not that I've got nothing going on, but its relevance to Warwick Blogs is seeming ever smaller. New plan for this blog, if it can be called a plan, is to use it as a memento of my forthcoming kart racing championship – which starts next weekend! – and for posting the odd photo, to keep me active on that front.

I've been commenting for a while now on various Warwick photo blogs. It started with Max, whose real website is here, but has spread recently to others.

Nathan has been the mainstay, reliably churning out a great photo every day for a month or so now.
Gemma got in on the act a little while ago, and then Nick; my turn now!

I'm sure mine won't be anything like as regular as the others', but a couple a week would be good. See below (which is technically above) for my first effort!

Virgo Aug 24 - Sep 23
When all hell breaks out at work today, just be glad you have a sweetie at home ready with a glass of wine and a sympathetic ear. No sweetie? Forget work, get on the internet and find one.

Quite. Well, here I am; what now?
Actually, amusingly, work was pretty hectic (I've been assigned the task of managing the upgrade of the two-site office network) and I spent the evening round at my friend Nikki's drinking wine. However, not my home and not my sweetie! Sorry Metro, better luck next time.

Thought I'd better post something just to avoid January's blog looking as empty as the month itself has sometimes felt. Still, I'm feeling pretty reasonable overall, and February is definitely looking up – details to follow. Sweetie still required.

Reckon we can get an extension?