F1: what a mess. My opinions are in various comments boxes.

Last TopB last night, and I felt obliged to enjoy the sunshine in the Piazza and enjoy seeing lots of people. It was great. 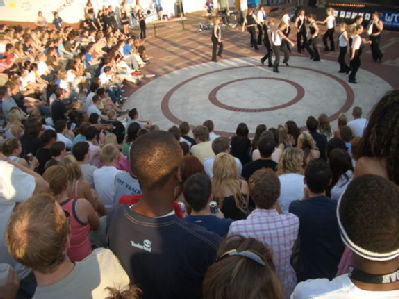 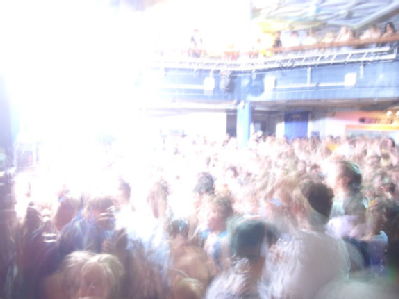 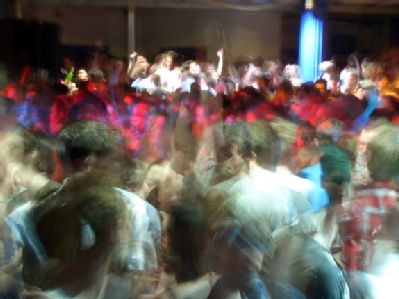 The FIA has issued a summary of its draft regulations for the 2008 Formula One season (they have to be finalised by the end of this year). Frankly, they're a load of rubbish! One particularly bad argument in the preamble of the press release states:

The simple truth is that whether the six manufacturers collectively spend 1.5 billion or (at the extreme) 150 million, the result will be the same. The one with the cleverest engineers, the best-managed team and the best drivers will win, the others will fail… So, arguably, some 1.35 billion is being completely wasted in Formula One each year by the six manufacturers.

Er, sorry? The 150 million figure is plucked out of nowhere at all; if they'd chosen 10 million, they could say that "arguably, some 1.49 billion is being completely wasted…" Terrible arguments continue through the release, including suggestions that nearly all the research and development carried out by F1 teams is completely useless: the FIA wants to "eliminate" all of what it terms "expensive technology which is invisible to the public and known only to a tiny band of specialist engineers"!

The result is a draft document for a Formula requiring less engineering than your average Formula Ford team. Major car manufacturers will not want to put their name to a home-build kit car for which all the parts are already specified. Speaking of home build, smaller teams will be able to buy part or all of bigger teams' cars under the new rules.

I fully expect a car produced to these specifications to look almost exactly like this:

From a shoe, with a comb

OK, so it's not quite reached Black Books levels of mess, but I really really need to wash up and tidy my room etc.

Final Fling was awesome, as predicted. Not being tied to my housemates or a young lady this year had its benefits, i.e. being able to wander around at will and speak to lots of different groups of people. The Zutons were great and Nat and I had fun down at the front! Shame about glc. Photos! 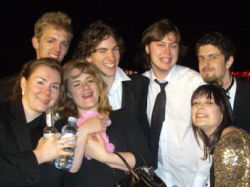 Yesterday was fun too – after nearly 3 hours of post-Final Fling sleep, I drove to campus and then to Rockingham, where there was an IMechE (Institution of Mechanical Engineers)-organised scrutineering/driver-training day. We checked out some other Formula Student cars, found that we've got a little more work left to do on our car than we thought, and had a good day. The highlight was driving 7 laps of the handling circuit in a BMW 330i SE - that's a 3 litre, 260 bhp engine – with a racing instructor in the car alongside us! Unfortunately, the traction control on the car was unhelpful: just when I needed a little hint of wheelspin to get the back round and come out of the corner on the power, there'd be no throttle response at all and it would just understeer slightly. Oh well, fun fun and not bad for (a greatly subsidised) £25!

OK, quick life update so I can get back to some more interesting posts!

Work's been continuing on the Formula Student car all week but, with some solid effort this coming week (think 8 a.m. starts, having got from Leam on to campus, for the next week or two!) we reckon we'll have the car finished by the end of term, maybe even this week. That should give us a couple of weeks to test the car, break it, fix it, test it and fix it again before the competition. Hooray for the summer holidays, eh?! Oh, I really should enlighten most of you what Formula Student's all about! Post to follow…

Friday night was stunning, the best Crash I've been to in a long while, possibly ever! I had such a good night, despite (or maybe – perish the thought – because of) staying sober. The preceding blog social wasn't up to much; pretty rubbish, in fact, but most of the usual suspects made it to Crash, where much more fun was had. Well done to certain reluctant people who came along to the Union anyway and, I believe, had a fairly good time!

All this weekend was motorsport-related too. I woke up before 5:30 each day to go marshalling on the Rally of the Midlands, Saturday in a radio car at MIRA (a venue supposedly secret enough that I should kill you if I told you about it, but we saw nothing of very great excitement) and today running Passage Controls and Main Time Controls on the route. We even got home in time to watch a crackin' Grand Prix! 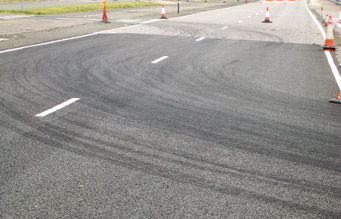 Yesterday we were witness to an Impreza barrel-rolling 5 times before coming to rest on its wheels, but the most 'exciting' feature of the weekend was the finish of the Arbury stages this morning: a Flying Finish most of the cars were passing at 120mph on a bumpy, downhill, cambered and tree-lined single-track road, with the Stop board about 200 yards on. There were a few cars struggling to stop, not least the Evo VII that ended up plunging into a nearby ditch – after crossing Flying Finish – and nearly smashing the car open against a tree. Not pretty. I went up to help the marshals, but he reversed himself out; I was just talking to a stage official about the problem, near Stop, when we saw an Impreza coming towards us quite fast, back stepped out, rear tyres smoking away… followed within a minute by a 205 GTi doing the same thing. Quite scary, and we all moved back a good few feet after that.

Running on about 4 hours' sleep a night at the moment, and I've got to be in uni, as I mentioned, for 8 tomorrow morning! Better make my other planned post tonight a quick one then…

(...incidentally, Holmes never says that in any of Sir Arthur Conan Doyle's books, nor does he wear a deerstalker).

If you haven't guessed what I'm about to say, you give bloggers far more credit for originality than they deserve. Therefore spread it far and wide:

'THE BAR', about 7:00/7:30ish onwards, then to Crash if the mood takes you. Open to all, including new bloggers, non-bloggers and (ahem) more mature bloggers (yes I mean older ones). And girls.

edit: it appears I'll be having to stay more or less sober tonight!

How did that happen?

edit: I'm a fool and I can't even read the single relevant sentence on the page I linked to. Thanks Helen. D'oh.

How is it that the internet's so interesting when you've got exams, or any work to do, and so boring just a few hours/days later?