Thanks for the luck!

Karting was successful on a personal level (and I'm still alive), but not fantastic for Warwick Motorsport. I took 6th in my individual sprint race – which could have been 4th if I hadn't made a small mistake with 3 laps to go – but drove really well and had lots of fun. The sprints round went well for the rest of the team too: a win from 6th on the grid and 3rd from the back for two of the others. Third overall from 47 teams won us a little trophy and a packet of Sainbury's value-range Rich Tea biscuits. Second and first got chocolate digestives and Party Rings respectively. Lucky gits.

The endurance round, also held yesterday, was looking promising too. The two slower members of the A-team (myself and another Simon) took a 6th place grid start and brought it home in, if I may say so, a superb third place after an hour's racing and three silk-smooth pit stops. The only thing to mar the enjoyment was the race being stopped for seven or eight minutes while an ambulance went out on track to pick up the pieces of an accident (not the one in the picture here). 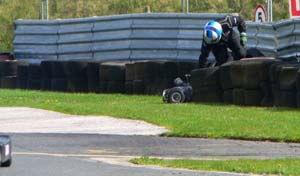 At this point we were looking very good to take fifth in the championship. Unfortunately our last race – driven by our two quickest drivers – was a shocker. We lost the fuel cap off the kart not once but twice while it was out on track! One of the guys also had a spin. Result: 13th place, which gave us 8th overall for the round and left us just adrift of Oxford Brookes' B team in the championship – sixth again, for the third year running! Consolations include the facts that we were fighting against more teams this year than in any previous, and that we had a slightly weaker team. Oxford Brookes A – the university runs a huge motorsports degree – won the championship by a couple of points from Loughborough, Leeds and Hertfordshire.