As promised to various people, here's a quick write-up of the second and third rounds of BUKC in which we took part just over a week ago.

Unfortunately it was a pretty rubbish couple of rounds for us, after the dizzy heights of a podium last time out (where I also explained the race formats etc.). Starting from 30th on the grid, Myles showed very good pace but had a spin – he was taking 4 (four!) karts under braking for a slow corner and just wasn't expecting anybody to be sat inside him trying to brake even later. 8th from 30th not great, but the day was still salvageable. Our next race was a 6th place on the grid, driven by Ian who'd won from 11th at the first round 2 weeks ago. His kart (randomly assigned) just wasn't up to the job – he was losing ground out of every corner and eventually the thing pretty much died on him. Aidan's race from the back of the grid was also disappointing – struggles with traffic and the kart and whatever else got 7th. Down to me, newly promoted to the A team, to pull something out of the bag… 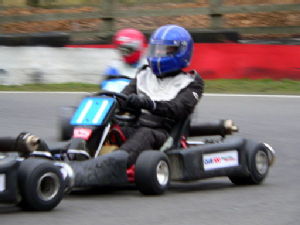 …but it was not to be. For whatever reason, the pace kart led the rolling-up laps quite quickly (although I'm still wondering if, through tiredness, I made an error in the pre-race procedure that meant I never caught the pack during rolling-up) and the race started with me not 4th on the grid, but about 15 seconds (a very long way!) behind the pole-man. I had a fairly satisfying race, overtaking lots of people – I crossed the line sat on 5th position's bumper and about to pass her – and finishing with third fastest lap, but 6th place belies the fact that I could have won the race; a podium was definitely in reach. Warwick A – 8th out of 50 in round 2. Rubbish.

As mentioned, the day was a double-header, with Round 3 taking the form of 2 one-hour endurance races, two drivers per race, three compulsory pitstops. The first A team race was fairly incident-free except for a couple of messy pitstops (my genius pitboard idea fell apart slightly) and we came home 5th. They brought home a respectable 4th in the second endurance race, but I was in the B's for that one. 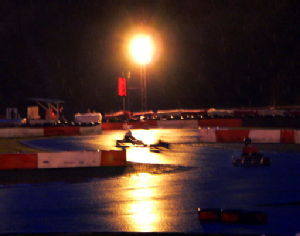 Unfortunately it was an 'exciting' race – driving in the dark, in the rain, on slick tyres with limited visibility is very 'interesting'. The rear wheels were spinning up at anything over half throttle and the grip levels and best lines changed every lap – I'm not sure I've ever concentrated so hard for 20 minutes! The real story for me, though, was the biggest crash of my racing 'career' so far. I was barely hurt beyond a couple of extra bruises, and I've been injured more from lesser crashes – nearly broke my thumb in an innocuous side-on collision 15 months ago and I've cracked my ribs a few times just from the force of the kart over kerbs and bumps – but this was the most spectacular:

I started 19th on the grid and got a great start up the inside of the first couple of corners. Just as I was thinking "cool, I'm about 11th now, let's see how many more I can get", I noticed the two karts just in front of me touch and go sideways across the track. Nowhere for me to go and I struck a glancing blow to one of them. This slowed me down enough that the next kart behind me, still travelling at 45 mph or so, hit me quite hard from behind, nearly throwing me clean out of the seat (no seat-belts in karts because there's nothing to protect the driver if the kart rolls, so he's better off being thrown out) and snapping a tie rod, bending the rear bumper and badly deforming the seat support bars. I may have been hit a couple more times, but I just remember a front wheel flying past me at head-height, another few rolling past along the ground, and being sat in helpless in the middle of the track hoping the remaining 20 karts on the grid would find their way past me OK. Some of them did, but it was still a pretty big pile-up.

Afer we repaired the kart,we'd lost so many laps it was just for fun – which is certainly what the rain provided! The next round is on 31st March, so you can expect another lengthy report at the start of April. Enjoy!