Sorry for reposting the article below this one – I made a bit of a mess and had to start again!

This is from a PhotoSoc studio session a couple of weeks ago. 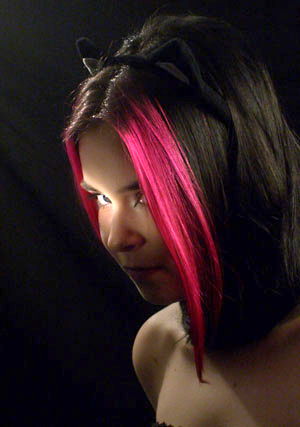 Acting on a tip-off from Andy, in my comments box, I thought I'd try adding a frame to my photo (which can also be seen here, as previously mentioned). I originally tried a div tag enclosed in another to get the double-border, but it didn't work, so now the image is padded, with a black border. Thanks Andy!

Edit: I've noticed that highlighting the image with the mouse makes it appear lighter (less dramatic but more features visible) in Firefox 0.9.1 but darker in IE6. Also my blog structure seems to be broken by the div tags, in IE only.

Life update by another medium

Taking a leaf out of the book of The Times' 'T2' section (before they changed it), here's a nice little layout giving an overview of what I've been up to. Sam will notice I chose 12 photos, "because it divides by two, three and four"  how's that for browser compatibility?

The subject matter covers Union elections, a PhotoSoc studio session, Dan's 'Screw Love' party, a Stroop test I did for Lisa, another photo shoot, and my kart race. Larger, uncropped versions are in my galleries (mainly 'February' and 'PhotoSoc').