To complete the set (having done Friday, Saturday and Sunday), here's a picture I took at the Autosport International show on Thursday. A successful day touting for sponsorship for our racing car. 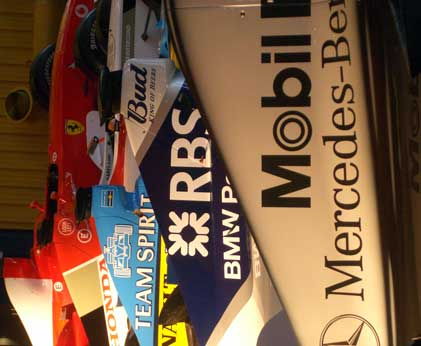 The following is what remains in my memory of Friday night. I wasn't that drunk, it was just a very long time ago.

I've had very few nights out where I've seen quite so many people I know! (Not since my 21st birthday – which seems like ages ago! – and one very memorable TopB in the first year). I love nights like these: if nothing else, great for convincing myself I've had a truly successful time at uni – a paper qualification's a great thing, but if you're not going to enjoy your student years, why not just enrol with Open University and get a job?! At one point I found myself drinking with a majority of the Sabbs, which was a bit of a first. They're only normal people too (or so they claim)!

It was fun seeing some bloggers again (those that made it), and we even got close to a 50/50 male/female split for a fair portion of the night – good effort!

I beat Sam (and therefore everyone else) at Scissors, Paper, Stone by virtue of being left-handed.

Crash was, of course, worth going on to. As others have said, Fightstar were pretty good (there's a general deep-seated desire to avoid praising them too highly, I think!) but whether filling 2+ hours of Crash with bands is a good idea, is still up for question. Move Crash to a Tuesday if you want, and get a good indie/rock/punk/whatever band in on a Friday night (or vice versa). I'd go to both.

Finding my carefully arranged social moved at the last minute.
Finding out just after buying my first pint.
Actually there are a lot of more serious mini-rants bubbling away under the surface here, but let's just note:

At the point a whole string of stunning songs were played (starting with The Libertines and including Killers and three or four other beauties) most of my friends were already horribly drunk. This meant nobody to dance with, on a rare occasion that I felt like hitting the marketplace floor.

It was my first night of 2005 in the Union, and my first 'down' night of the year (from around midnight onwards). It's irritating, to say the least, that nights out can have a tendency to bring me down sometimes, for no real reason. I came home ready to scrawl my feelings on to paper, to read the next morning, but a great new friend was around to talk me out of my morbidity – thanks :-)

It sounds like a petulant complaint, but with so many groups of friends around, I didn't feel like I spent a proper night with anyone. It was great to see each of you, and if I could go back and spend the full night with each group in turn, that'd be close to my idea of a perfect night out.

The Ugly included this fine effort: 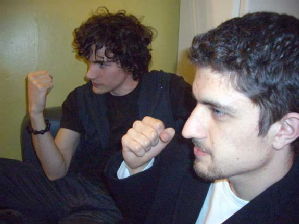 More are available for your perusal in the January 2005 gallery.

Play In A Day was cancelled (on account of me being the only person to turn up for acting duties!) so I was very glad of some sleep. Slept until 12:30, got up eventually, phoned some phone shops and went to Coventry to pick up a phone. For those of you that have my number: it's not changed, but if you ring me now my phone won't automatically turn itself off. Sorry about the last few weeks!

I admit that it's not great, and it's reasonably heavily cropped, but I was reasonably pleased with the below effort as a grab shot: 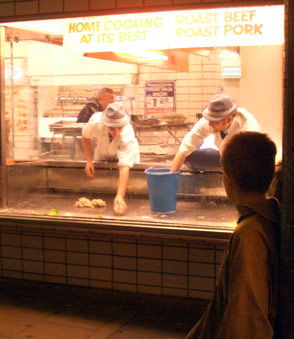 The Sunday that was

So that's it then? Another weekend gone? I've actually had things to blog about this weekend (I stole some of Holly's inspiration on Friday) but not got around to it. So now you'll have to suffer a retrospective; I'll keep it brief. ish.

Almost my entire day today was spent on my new phone. So much has changed in the 37 months since I last had a new phone that I was obliged to go through my old phone book, type every name and number into Excel and then add them individually to my new phone. Not so bad, you'd think, but my old phone was completely full (300 numbers) and I could only cut that down to 225 that I still forseeably need. Of course, me being me, the ones I discarded are safely stored in Excel in case I need them in future…

The worst thing about this was that it was my whole day. The best things were learning how to use my phone, and multi-tasking by watching Trainspotting (for the first time - wow). And then Almost Famous. Mmm Kate Hudson. And then Leon. 5.5 hours of filmic awesomeness, which I rounded off by eating baked beans and, er, stilton, on toast. Good ol' student food eh?