Warwick CU is putting on a carol service for all! The awesome Revelation Rock Gospel Choir will be singing, free food and drink, and free busses if you meet at the main campus stops from 5:30 ~ 6:15

I just wanted to share that I'd been thinking about mathematics,

You know people always say you know you're in love when you just know that you are, well I know!

But, wait, oh dear what will the children look like, argghhhh. Maths I love you but you do consume my life, oh I really need a lovely female to distract me, preferably a mathematician so we could talk about maths argghhhh!

I just found the Warwick University Seti@Home team, and with a disappointing 51 members. I thought I'd spread the word a little, maybe you'll join, and push warwick to the top of the standings!

Anyway, use those wasted cpu cycles for something productive, and run SETI@home, why not eh?

Recently I have been thinking about just how cool mathematics is, now, I know that most people at this point will think I'm a little crazy, but once you understand what mathematics is, you just can't help but be in awe of its overwhelming greatness.

You see, the problem is, that unlike every other subject out there, Mathematics doesn't live in the real world. Mathematics lives in a purely abstract, imaginary universe. When most people think of maths, usually after I've told them I'm on a maths degree, they think back to their GCSE days and think that maths is all about sizes of angle in triangles and solving quadratic equations, NOOOOO. This isn't what maths is about, Maths is about looking at the logical statements we have already made, and using them to deduce new ones. Group Theory, where my main interest in maths lie, is massively abstract, you work with objects that only exist because you write them down, but Group Theory also gives you the tools to say when one object equals another, and so you can then say which sectons of mathematics are equivalent.

Group Theory is just so good, it stems from four axioms, and with that a huge area of maths, if not maths itself, arises.

Anywho, just a quick rant, about maths, the only super-subject.

I've had some very odd lectures, recently, there was one on Friday when the lecturer recieved five pints, and drank all but one, 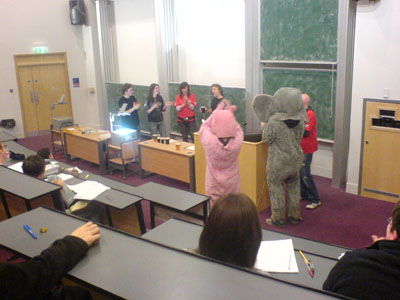 And yesterday, we had this, 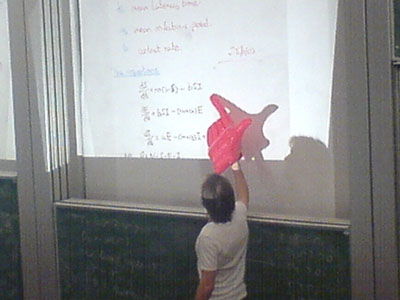 Yes, that is a giant hand being used to point out equations.

One of my housemates sent me this quiz, and seeing as how these things seemingly belong on warwick blogs, I though I'd add my own responses:

1. First name? Steven.
2. Were you named after anyone? Yes, everyone was named after someone else.
3. Do you wish on stars? No
4. When did you last cry? Sunday Evening
5. Do you like your handwriting? I quite like it, others however…
6. What is your favourite lunch meat? Spanish Salami
7. What is your birthday? 17th September
8. What is your most embarrassing cd? Star Wars Episode I Soundtrack.
9. If you were another person, would YOU be friends with you? Often, it's just me and myself.
10. Do you have a journal? Yes, of sorts.
11. What are your nicknames? 'Big-Steve'
12. Would you bungee jump? Yeah!
13. Do you untie your shoes when you take them off? Depends on the shoe.
14. Do you think that you are strong minded? With some things, yes.
15. What is your favourite ice cream flavour? Chocolate, with added things like cookies etc.
17. Red or Pink? Red.
18. What is your least favourite thing about yourself? Physical Shape.
19. Who do you miss most? A very special friend, who I haven't spoken to in ten years, well she was special.
20. Do you want everyone you send this to, to send it back? Oh, go on then.
21. What colour pants and shoes are you wearing? I'm not wearing any of the above! (I'm guessing its the american pants.)
22. What are you listening to right now? Linkin Park – In the End.
23. Last thing u ate? Slice of caramel shortcake.
24. If you were a crayon, what colour would you be? Blue.
25. What is the weather like right now? Cold, but nice, and yes the house is cold.
26. Last person you talked to on the phone? Mother.
27. The first thing you notice about the opposite gender? Eyes.
28. Do you like the person who sent this to you? Yes
29. Favourite drink? Coffee
30. Favourite Sport? Formula 1
31. Hair Colour? Dark
32. Eye Colour? Brown
33. Do you wear contacts? No
34. Favourite Food? Pasta.
35. Last Movie You Watched? Edward Scissorhands
36. Favourite Day of the Year? Errr, don't really have one.
37. Scary Movies or Happy Endings? Happy endings I guess, scary movies rarely scare me.
38. Summer or winter? Summer you fools.
39. Hugs OR Kisses? Hugs
40. What Is Your Favourite Dessert? Any Cheesecake
41. Who is most likely to respond? People who are aware of its existence.
42. Who Is Least Likely To Respond? Starving, HIV infected, Third World Children.
43. Who lives in your house? Grannah, Tomb and the lovely Holly
44. What books are you reading? Ekkk, here goes: "The Game", "Field Arithmetic", "Groups, Rings and Galois Theory", "Right Hand, Left Hand", "Fractal Geometry" and "Number Thoery".
45. What's On Your Mouse Pad? Err, its a pad of paper, wide ruled, without margin, four holes.
47. Favourite Smell? Success.
48. Favourite Sound? Sister's children playing
49. Rolling Stones or Beatles? Stones.
50. What's the furthest you've been from home? Austria.

I just remembered a little piece of code I wrote, so now I can add maths to my blog!

How cool, all thanks to LateX (pronounced Lay-tech), so now I can do cool things like:

What a long day its been!
up at 5am, yes at five, doing mathematical excursions work, that was due in later in the day, my own fault for not doing it any sooner, but I've just not had the time. Okay, then a purely liquid breakfast, helped one of my housemates put some pictures up, I'm the local DIY'er seemingly. Onto campus for 11, lectures until 3 then 2 hour mathematical excursions seminar, which aren't much fun to be in, because the maths is really really hard, but like a few hours later, when my brain has worked it all out 'behind the scenes', its all really cool.

Okay then I had something to eat, then read the Union Council agenda, and then came up with some points to raise about the general crappyness of a policy.

As for Union Council itself, we had more stupid amendments, the general flow of Council seems to be that at the moment, what happens is someone says that they'd like an amendment, but when asked what that amendment is, they don't know! They say "umm, err, can it say something like this…". I mean everyone's been to like two meetings now, get with the program already.

I then briefly entertained the idea, in my head, of aiming to become chair of council, oh such a bad idea, but I'd probably be quite good :-)
I always seem to moan, it comes naturally, so I'll end on a high note.

I'm going home on Saturday, so I get to see my family, including sister's children, ahh how great is that! Oh and maths presentations to my tutor group tomorrow, awesome!