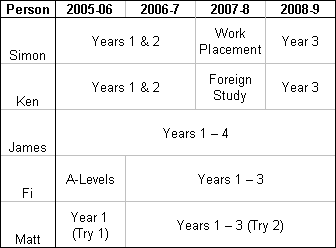 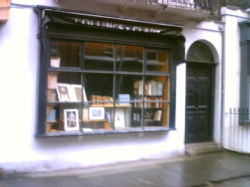 On Saturday there was a RaW OB (Outside Broadcast) for the Uni open day. We had 3 shows live on air from the piazza and then the Wind Orchestra and Rev (Revelation Rock Gospel Choir) performed and I played some music while they were setting up and afterwards. It was quite fun but I did get sunburnt on the back of my neck and my forearms.

Later that evening I went to a pub in Cov with Ian where I helped him drink some of the 8 free pints that he had won in the pub quiz. We then went onto Jumpin Jaks. I’ve never been to a Jaks before, we have one in Maidstone but I never went to it. It’s slightly different to what I was expecting and has really over-priced drinks (>£3.30 per bottle & £3.10 for a pint of coke) but was quite a fun night.

We left at about 2:30am, Ian got a taxi back to campus and I walked home via a chip shop. I got in at about 3 and then didn’t get up again ‘til midday. ‘Twas a good night.

This morning I woke up to what sounded like someone bouncing a ball agains the wall next door. It just kept going “ba-dum” every few seconds, the stopping for a bit and then starting again. When I was a bit more awake I noticed that I coincided with cars going past the front of the house.

It turns out that they have put one of those traffic survey things in the road just outside the house. You know the sort, one of the things with 2 rubber pipes across the road. Now everytime a car goes past I can hear it go “ba-dum” over the pipes. As soon as the recorder has gone I’m going to go out there are remove those pipes any way I can.

Ken and I have managed to organise a time to go and see James and Fi in Southamton this weekend, and then next weekend I’m going home for a few birthday celebrations.

Anyways, the new guy in our house is arriving tomorrow so I need to be awake when he arrives :) Night all.

Havn't blogged for a little while so I thaught I should do so now.

At the moment I am sitting in a room at Southampton University. The reason for this is that I am at the SRA Spring Conference. It is currently the 2nd day of 3 and all the sessions are over for today. We now have 2 hours to get changed into 70's gear and then head back to the SU for dinner at 20:00.

Dinner is Roast Chicken with baby onions, bacon and red wine sauce. Dessert is Limoncello and Amaretti Torte with a fruit compote followed by Tea or Coffee with chocolate mints. Mmm sounds good.

Living in Rootes at Warwick I am used to the SU being 2 mins away, but here it is a 15–20 min walk or a bus ride. I think today I'll take the bus back as it appears that the much talked about April showers have just hit.

I havn't really bothered with the 70's costume, I just brought my bright orange shirt with me so it won't take me 2 hours to change into that. I will however be leaving at about 19:15 to get the bus back to the union for 19:30 rather that the one that is supposed to get in at 19:55, a bit close I think.