I’ve recently got back from London where I was at a recording of Out To Lunch for BBC Radio 2. I spend most of the afternoon around London. I went to Clapham for no reason, Picadilly Circus to see the advertising screens ‘cos I don’t remember seeing the in person any time before. I then found out how close together some underground stations are on the surface by walking back from there to Tottenham Court road while just wandering randomly. 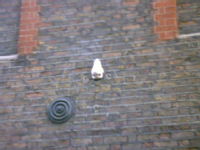 Just across the road from the Soho Theatre, where the recording was, I went down a side streat, , and saw this. It’s a nose stuck to a wall at about 2nd storey level. How odd.

Later, at the recording, I now know where the BBC licence fee goes. It pais for the 2 free drinks for each audience member at this recording. I guess it’s go get us in a mood for laughing at some of the more weird comedy moments.

Tags: London Out To Lunch Radio 2 |