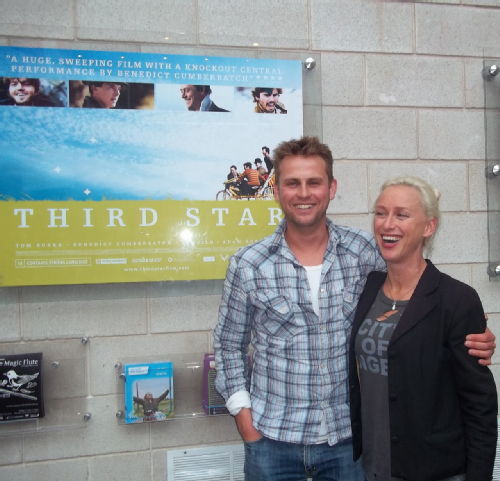 Chosen as part of the 2010 Edinburgh Film Festival’s Closing Gala, Third Star is a touching story about aspirations, regrets and the importance of friendship in the lives of a group of twenty-something’s. James (Benedict Cumberbatch) a writer suffering from a form of terminal cancer and facing the prospect that he will fail to see his thirtieth birthday, decides to take a trip with a group of his three closet friends to Barafundle Bay, the site of one of his earliest childhood memories. Along the way they find themselves confronted with a series of hilarious mishaps as they are forced to come to terms, not only with James’s illness, but with the direction that their lives have taken.

What is wonderful about Third Star is that it never falls prey to a gloomy kind of sentimentality that would have been all too easy, given its subject matter. Instead director Hattie Dalton concentrates on capturing the competing and shifting dynamics between the four men. The ever reliable Benedict Cumberbatch, hot on the heels of his successful run in the Danny Boyle directed theatre production of Frankenstein and television drama Sherlock, doesn’t disappoint in the central role. However the real credit goes to what is essentially an ensemble cast of talented British actors (which originally included Tom Hardy, who eventually had to drop out in order to star in a little known film called Inception) such as Tom Burke, JJ Field and Adam Robertson. Hugh Bonnerville also makes a brief but memorable cameo appearance as a beachcomber, searching for a set of brown Darth Vader Star Wars figures that he believes have washed up on the shoreline. The entire journey is set against the backdrop of a breathtaking Welsh landscape, which director of photography Carlos Catalan shows in all its glory.

In the Q&A session that followed the screening at the Warwick Art Centre, both Vaughan Sivell and producer Kelly Broad discussed the difficulty of getting finance for such a film, with distributors unwilling to take a risk on a ‘cancer film’. Taking questions from the audience, they spoke of the dilemma that these three friends were faced with at the end of the movie and the secret they would have to keep for the rest of their lives. For this generation in particular, Sivell said, friendships have now become a kind of substitute family (one we get to choose) much more so than in the past. When asked what he was working on next, Sivell spoke of his desire to continue making films that were writer and actor led, rather than director-led as is typical in the film industry. Either way this independent movie is a credit to the British Film industry and I look forward to seeing what writer Vaughan Sivell has to offer us next.

Talking to the Enemy

Whenever I come across a newly published work on Islamic extremism or the Arab-Isreali conflict I always find myself asking, what is their angle? What do they hope to gain from writing this book? Does it have a political agenda? It's easy to look upon the wealth of texts written on this subject matter and give up. After all where does one possibly begin?

Having studied an International Politics degree, there were the usual recommended core texts for the course but quite quickly it became evident that everyone had a 'position' and no one text could ever do the politics of the region justice. To lump them altogether under the banner of 'Middle Eastern politics' or 'Middle Eastern history' always felt highly reductive. What I found most frustrating were the constant and unashamedly sweeping statements that were often made to define what is such a diverse region.

Recently I came across a work that made me think again. In Scott Atran's new book entitled, Talking to the Enemy: Violent Extremism, Sacred Values, and What it Means to be Human, here we have a well-respected field anthropologist's take on the political violence of the region and for once, he makes it clear that we don't do anyone any favours by attempting to claim that terrorism is somehow perpetrated by an evil 'other'. This is a man who appears to know what he's talking about and so I began to wonder if perhaps he had something new to tell us on the subject? As an advisor to members of the US Congress and and the National Security Council, it would appear he has something worth listening to and that comes across loud and clear in this recent work of his. It is these sweeping statements such as the notion that the relatives of suicide bombers are proud to have their loved ones die in this way, that Artram questions, because as his research has shown, this is clearly not the case.

Atram is also know for his particuarly vocal disapproval of the use of racial profiling in attempting to identify potential suicide bombers and instead he suggests that the way to tackle extremism is to adopt a more measured approach by following an anthropological method of researching how certain groups behave. What Atram calls for is a greater focus on evidence-based policies rather than histerical, fear-inducing rheteric famously employed by some Governments.

Sunitha Krishnan and her amazing work

If this doesn't make your blood boil then quite frankly you're not a human being I want to know. Here is a truely inspirational woman. A big thanks to TEDx for spreading the word.

If anyone's interested in finding out more about TED then head over to:

So this is my very first blog and I thought I’d kick off by talking about one of my favourite course readings of the year so far, South Riding by Winifred Holtby. I have to be honest, I had heard of neither the novel nor the writer until they appeared on my Feminist Literary Theory reading list and I was required to give a presentation them.

For those of you who know nothing about the novel, here is a quick overview. South Riding tells the story of a group of characters living in mid-1930’s Yorkshire. We are introduced to some of the novel’s most important characters, in particular Sarah Burton, the newly appointed Headmistress of Kiplington High School for Girls, Alderman Mrs Beadows, the first Alderman of the district, Robert Carne of Maythorpe Hall, fighting not only bankruptcy but the demons of a disastrous marriage as well as Council Huggins a married man being blackmailed by Betty Warbuckle a woman with whom he had an affair with and is now pregnant and finally Joe Astell, a socialist campaigner fighting tuberculosis. However these are but a fraction of the characters that inhabit the fictional South Riding.

This has the feel of a modern novel in its dealings with issues such as a financial crises, the treatment of war veterans and a councillor caught up in a sex scandal (anyone in particular come to mind?). More than that though I think the biggest triumph of Holtby’s novel is its depiction of the roles of women in society their educational opportunities seen in the case of Lydia Holly who dreams of gaining a scholarship to University and the sorts of healthcare open to women of the time including issues of birth control and maternity care.

For me one of the most important questions Holtby asks is, how do women lead fulfilled lives? The reader is presented with conflicts that arise out of public and personal duties and again and again, her characters have to face choices; marriage or career, love or work? Above all I think it shows us the kinds of feminism open to women of the time and the limits of their independence.

If this has sparked an interest then I would also look out for the BBC production of South Riding, staring Anna-Maxwell Martin and adapted by Andrew Davies who brought us excellent adaptations of Pride and Prejudice and Bleak House. Below is the link to the BBC Press Office for all of you who are interested. I’m looking forward to seeing the kinds of scholarship that will inevitably emerge once the series hits our television screens.