Are they or aren't they?

Great weekend full of stuff!  Went to see M,L and J this weekend in Manchester.  The boys went off to the football (only HP's 2nd big match, he was v excited!) and me and L went off to John Lewis looking for curtains.  I love that shop and yes I found my curtains at long last which now means I can plan the rest of the colouring for the bedroom.  Back to the house for a few glasses of vino while we watched the match from the comfort of their sofa.  A nice curry when the boys got back and then a quick sprint down the M6 and back at home by 1am, perfect!

Sunday was spent on the beloved allotment and it's looking more and more like somewhere you can actually grow food!  I've dug another bed and tidied up a bed that looks like it might be a row of fruit bushes, unfortunately I need some identification on this and I did take photos it's just they took too long to upload at home yesterday - so are they or aren't they fruit bushes? and if anyone has some handy hints of how to tell just let me know.  I was so pleased with all the work I'd done and it was so warm I decided to actually bite the bullet and plant something so in went my rhubarb and asparagus (photos to follow here too!) Now the blurb on the back of the packet said use manure but my trusted gardening friend T said he'd got rhubarb in his garden and hadn't used manure so I've followed his advice, but if my rhubarb dies then I know who to blame (just in case you're reading this T!)

One more question though, I think my seed potatoes have gone too far in their shoots and now feel a bit soft, is this normal or do I need to get some more and start chitting them again - I'd be grateful for advice!

Well, had the second of the run of my friends' 40th birthdays this weekend.  It involved a trip to Exeter for a big party but it was worth the effort!  It's going to be a very long time before I get the image of T in a pink ballerina inflatable suit head banging....I suspect most people won't  be able to rid themselves of the image, its made worse by the comment of his partner E 'no-one will want to try that on after he's been in there, it'll be full of wee!'  So he's got to the age of 40 and his bladder has already given up the ghost.

That aside, it was lovely to see my old friends again and relive some memories it was also brilliant to have a good old boogie, even HP was up on the floor for much of the night, so certainly a fun time.

It's my turn next but I'm giving the party thing a miss, why have a party when I can go to everyone else's during the year!  D is talking about white water rafting for hers in July....we'll see, I quite fancy living at least until my next significant birthday!

I had to make a decision  late Friday afternoon just before I left work which basically affected my whole weekend.  I'm currently working on a project that will inform people of future changes in a particular area.  The team has gone to some trouble to ensure that the information is correct, realistic, reassuring and most importantly non-inflammatory.  It is also being drip-fed as new information becomes available.  So how come some person outside of the working team decides it's ok to announce completely incorrect information that has the potential to cause more disruption than the actual project?

I had the choice of leaving the comment to see how it would run but knowing that it could become something quite big and difficult to control or responding to the comment with the correct information but exposing more people to the information than we were necessarily ready to deal with yet - rock and a hard place springs to mind!

There was no one available to get advice from so I plumped for the latter, but I spent all weekend wondering if this decision was going to cause trouble for me come Monday morning!  However, so far so good, someone else has added that the incorrect announcement seems a bit of a waste of time and although the stats for the information webpage have increased I haven't had a torrent of panicky emails to deal with which is a big plus point!

I have been left wondering though why this person went to the trouble of announcing this incorrect information and I've come up with 3 theories:

It's a good job I've got the allotment to do my thinking on!  Another 2 days spent up there (HP even came up on Saturday!)  We've got some old carpet laid down on my paths and another 2 beds dug!
It's really beginning to look like an allotment.  I also hot-footed it down to the garden cantre and got some rhubarb and asparagas to go in a permanent bed - also spent a bit of time eyeing up the manure....next weekend perhaps... 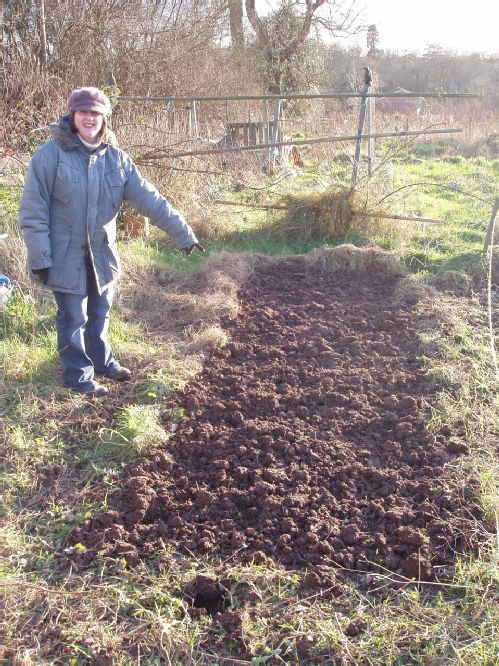 Well after yesterday’s miserable post I can say that today I do actually feel much better. By the end of yesterday I had made some head way into work related stuff and felt much more on top of things which has now given me a more positive frame of mind and of course it’s Friday!
The weekend stretches out and I’ve got the prospect of my allotment to look forward. Strangely enough I was thinking about that this morning when I was looking at the paper and I noticed that there is a programme on tonight about how to grow your own vegtables. It’s a new series so that should at least give me some pointers to get the whole thing started. I think it’s potatoes tonight which is great coz I love them!
I’m also looking forward to seeing D as I haven’t seen her since the summer and it’s always good to have a great natter with your old mates especially when a pub is going to be involved!
Hey Ho work is waiting that’s if I can keep my mind off the allotment and the pub!

I had a lovely weekend visiting my borther in Bradford on Avon, it really is a lovely town with some great architecture and history.
We went for a couple of walks along the river and canal. The first walk we saw a heron sitting very happily under the railway bridge, although I’ve seen plenty of those I’m always excited when I see another!
The highlight had to be our walk on Sunday. I had only a few hours previously mentioned that I’d never seen a Kingfisher and how much I’d like to when lo and behold my brother spotted one sitting happily in a tree. He wasn’t bothered that we were taking pictures, even though rumour has it they are very shy birds, and we ended up drawing quite a crowd of walkers gasping in delight at the unusual pleasure of spotting one of these beautiful birds. It really made my weekend and those funny bits of plastic I mentioned on Friday have really given me a wonderful clear memory of a great weekend and a rare sight of a Kingfisher.

I worry sometimes how much I look forward to the next thing, maybe I should just spend sometime enjoying the here and now…