An update on point 8 of my last entry

8. I've baked a cake for my friend's wedding in November - just got to do the scary part and ice it! It's not perfect but it's very difficult to get perfect icing on a sponge cake (top tier) that's my excuse and I'm sticking to it! :-)

The wedding was last Saturday and she thought the cake was lovely, so I'm pleased I took the risk.

OK, I've been cowed into submission after I've just been remonstrated with at lunch time for my lack of blogging.  After numerous protestations (and actual belief on my part) about how busy I've been,  I thought I'd check the blog to see what the fuss was....well I couldn't believe I hadn't blogged since May and guess what? I was talking about the rain then!

OK, quick catch up on the last 5 months:

2. Taken up camping (2 trips so far at the end of the camping season - brilliant fun!  Me and HP have decided we're T.O.Ts (Tough Oudoorsy Types) You can think of something rude if you want :(

3. Dismantled our garden and had a rendered wall built, it's painted and looks fab and just needs us to rebuild the garden again (job for next year)

4. The allotment has unfortunately died a death after being visited by a plague of locusts (Ok they weren't really but they were bad enough) I hope to revive this shortly

5. The chickens next door have had more baby chicks and they're still really cute, especially when one escaped around the front of our house and they only way we could get it back was through our front door, down the hall, under the nose of the cat (who thought she was seeing things!) and out of the back door - and it didn't poop once :-)

6. I've volunteered my services for the Meriden Village Appraisal project, so far I'm the Minutes Secretary and I'm hoping to get involved in the communications aspect too.

7. Don't know why I'm left this so far down the list coz it is something I'm really proud of... but since I last blogged I've lost a total of 37 pounds (in weight, not money) I'm hoping to make it 40 (no other reason except I'm 40!) and I've had a great time going out and buying new clothes!

8. I've baked a cake for my friend's wedding in November - just got to do the scary part and ice it!

10.  Celebrated my 7th wedding anniversary with my lovely HP - leaving the best thing 'til last x

OK - that's all folks!  (except I might try to keep things a bit more up to date from now on, as I've just remembered how much I like doing this!)

Looks like I spoke too soon.  I went up to the allotment last night in between the showers to try and tackle the weed growth that I knew would be really bad after all this rain but I was also hoping to find my produce springing up after their drenching...it obviously sprang up too lush as some greedy critter has eaten it!!  My peas have gone - mice?, my beans have holes - slugs?, and my purple sprouting brocoli is reduced to stalks - slugs again?,  the things that remain unscathed are my potatoes, onions and pak choi but that's not going to make my vegtable in-take very exciting is it??  humphhh!

I'm probablt the only person who is secretly enjoying the rain we're having.  I've just planted new seeds up at the allotment and I better they're having a great time sucking up all this moisture.  The only drawback is that I haven't been out digging and hoeing which means them darn weeds will be at it too :(

Anyway here's some piccies of my lovely bit of land it's coming on a treat: 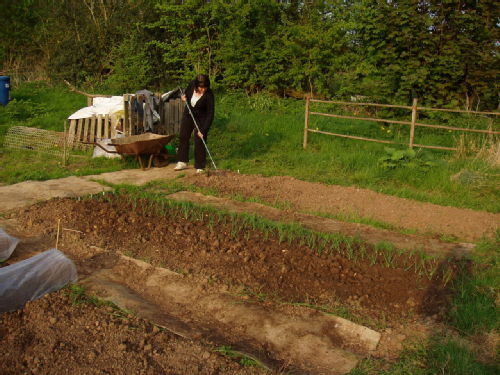 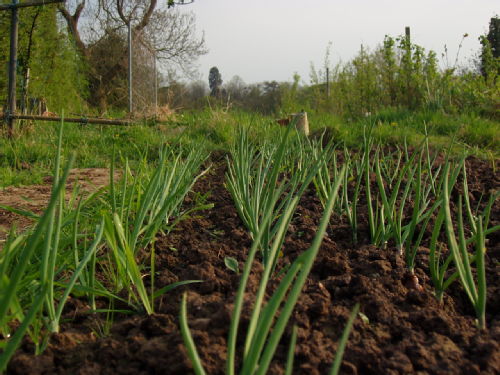 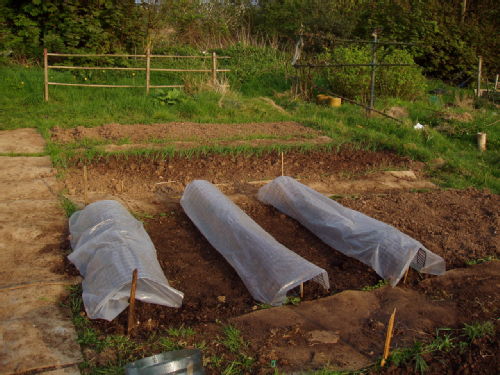 Under cover we have pointed red cabbage, pak choi and purple sprouting brocoli.  The covers are off now and they are making really good progress, can't wait to eat them!

Just haven't got around to it…

I haven't written anything for ages but I'm feeling the urge to just write so what better place to do it?

I've been meaning to update on  my allotment for ages I've even got photos but I just haven't got around to it.  So without the visuals here's the text...my potatoes are coming on a treat although I was told yesterday that if it doesn't rain then the actual potato won't swell :( my onions are very handsome and they're all standing up in a nice row, although apparently they won't be ready to eat for ages and I've got to let them dry and everything :(  My pak choi looks great as does my purple sprouting brocoli and pointed red cabbage :) however I did move some carrots and leeks from my greenhouse the other day and they look decidely sorry for themselves now despite my watering them and talking to them :(  WE NEED RAIN!!!

My friend T came up trumps again though, he's given my a scythe so I can cut back all the nettles and long grass that's growing around the edge of my plot.  I had a go on Monday and I don't think my technique is up to scratch as I ended up with a scythe injury - lucky just a blister as opposed to a toe amputation!!

Archery has also taken a dive.  After changing to HPs limbs (that conjurs up amusing pictures..) my arrows no longer suit my bow and they have enabled me to miss the target more times than hit it, no honestly, it must be the arrows, a good archer will always blame the bow it can't be their release technique or the fact their mouth is hanging open in a fish-like manner, or their head resembles a nodding dog, or their shoulders mimic an old crone - none of these things are possible it is just the arrows!!  Anyway I've gone and bought some new ones which will make me a champion before the end of the year!  At this point it is worth noting that HP has acheived a significant personal ambition of becoming Archer of the Month and I'm very proud of him and I know he can't wait for his shiny badge - he's like a little magpie :)

Work is good, things are hotting up on the R front and it's exciting stuff I just want it get going so we can see what the end result will be like!

Anyway pictures will follow of the allotment and archery hopefully (if I can hit the target!)

It was Hp's mum's birthday last week and like a good son he phoned to wish her Happy Birthday and catch up on her news.  Apparently she had received a card from her cousin in New York who we spent an evening with when we visited NYC in March.  In it she commented that HP had 'matured well..' - he's past 40 now so you'd hope so and that I was 'difficult to know'.  HP kindly put it down to the fact that she didn't actually ask me anything about my life, history, background, work etc. and as it was a family thing I didn't get an opportunity to volunteer too much information.  When HP first told me I felt a little insulted as she's insinuating that I was being deliberately obtuse and unfriendly but now I've decided that I must be enigmatic which has a slightly more romantic and flattering connotation.

Strangely I always thought I was pretty much an open book what you saw was what you got, warts and all, I'd happily tell everyone about myself and then think maybe I shouldn't have said that or revealed too much etc. but hey ho I suppose it goes to show you learn something new about yourself everyday.

Why is it when I go to a particular petrol station Texaco I always get charged £10.01 despite very carefully stopping at £10.  When I look at the display it says £10 but when I get to the cash desk it's £10.01.  I think they're adding a penny to everyone's petrol, just imagine how many people fill up with petrol every day and get that extra penny added, it could amount to a hefty profit...

Follow-up to Triple A from HP's blog

Oh and the chicks hatched and I got to name the first one.  I named her Lucy and she was all black and fluffy.  That surprised me as I thought all chicks were yellow and then changed colour as they got older, it just shows you what 40 years worth of Easter advertising can do to you...

Just got back to work after a fantastic week off.  I didn't go anywhere exciting just stayed at home but it was lovely.  I spent my time pottering around  the house and doing things I like doing, mainly 3 As

All in  moderation of course :)

My neighbour's away again and I'm in charge of chicken feeding  - Yippee free eggs for me!  There is a slight problem though this time, one of the hens is broody and apparently they need special handling so HP and I popped round to see what we had to do last night.  When C opened the coop this big, black hen was all plumped up sitting on some eggs.  C has marked these with a red pen and they are not to be eaten :( as they have little chicks inside :) The problem is that when all the other hens start laying this broody one will gather them up under her and the one's marked with a cross might not get enough warmth and then die...oh no!  So we have to lift her up, sort the eggs out and take away the ones without the red cross.  Sounds easy enough.....but she's quite big and she pecks a lot to protect the eggs.  HP reckons we should wear a gauntlet to protect ourselves!

I'm secretly wishing that the eggs hatch while they're away and then I get to look at real Easter chicks and maybe even keep one or two....