We moved into our spare room and bed last night as we're about to start decorating our bedroom and the bed that HP made years ago is having a face lift by his good self!

Now I was quite excited by the move, the spare room has already been decorated and is effectively my dressing room with my wardrobe, chest of drawers, all my girly stuff like make up, jewellery, straightners etc. etc and I thought it'd be nice to be surronded by all this niceness.  Well, when I actually whent to bed it was lovely.  The bed was comfy, we had a king size quilt on a double bed so no possibility of losing most of it to HP in the middle of the night and I was enveloped in all my girly things but I had the worse night's sleep ever I just fidgeted and fidgeted and was constantly waking up.  I can't believe that we're so conditioned to being in certain surrondings that even when we move to an equally familiar environment (i.e. a room I use every day!) that we can't relax enough to sleep properly.  It wasn't just me HP was in the same boat and the cat was not too chuffed either, seeing as that's normally her bed and she gets to have it all to herself!

Anyway I can only hope that I get used to it soon enough otherwise I'm going to be particularly miserable over the next couple of weeks and then we'll have to do it all again when we change back to our newly decorated room..harumphh!  :(

Across from my office I can see into a lecture theatre and on the screen is the title 'Gay Masculinities' I wonder what that's about?  I have to say the students look fascinated, I'm trying to read the rest of the slides but not getting much more insight into what it all entails.  I might google it but I'm a bit concerned about what might appear...

More pictures of my allotment, if compared with the earlier ones you can really see how it's coming on.  See if you can spot the first rhubarb plants.... 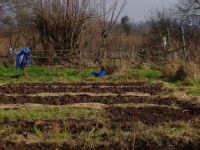 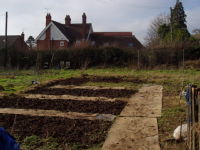 Are they or aren't they?

Great weekend full of stuff!  Went to see M,L and J this weekend in Manchester.  The boys went off to the football (only HP's 2nd big match, he was v excited!) and me and L went off to John Lewis looking for curtains.  I love that shop and yes I found my curtains at long last which now means I can plan the rest of the colouring for the bedroom.  Back to the house for a few glasses of vino while we watched the match from the comfort of their sofa.  A nice curry when the boys got back and then a quick sprint down the M6 and back at home by 1am, perfect!

Sunday was spent on the beloved allotment and it's looking more and more like somewhere you can actually grow food!  I've dug another bed and tidied up a bed that looks like it might be a row of fruit bushes, unfortunately I need some identification on this and I did take photos it's just they took too long to upload at home yesterday - so are they or aren't they fruit bushes? and if anyone has some handy hints of how to tell just let me know.  I was so pleased with all the work I'd done and it was so warm I decided to actually bite the bullet and plant something so in went my rhubarb and asparagus (photos to follow here too!) Now the blurb on the back of the packet said use manure but my trusted gardening friend T said he'd got rhubarb in his garden and hadn't used manure so I've followed his advice, but if my rhubarb dies then I know who to blame (just in case you're reading this T!)

One more question though, I think my seed potatoes have gone too far in their shoots and now feel a bit soft, is this normal or do I need to get some more and start chitting them again - I'd be grateful for advice!

It's been a few days since I put letters on a screen but then since my 'stuck duck' story there hasn't been much to ponder, rant or even just chatter about so here's a quick catch up on the last few days:

Went to London on Monday which was great :) but it was noisy and smelly which wasn't great :(

See, balance in everything and the rewards will come....

This is probably one of the saddest things I've ever seen.  After work yesterday I thought I'd take HP for a drink down the local and stop off at the duck pond to watch the ducks slipping and sliding on the ice in what I thought was going to be a cute and funny way, but it was not to be!

When we got there someone had left loads of bread and grain for them on the ice and there was some bigger swan sized holes that the ducks were paddling in as well as slithering about, so far so good.

Then out of the corner of my eye I saw a duck on it's own just sitting very still on the ice, I sent HP to investigate and it was stuck to the ice, it's feet were out of the water but its undercarriage was well and truly stuck.  What made it worse was when we tried to get closer to see if we could do anything to help it, it started scrabbling around with its feet and just going around in circles - it was so sad.  After trying to break the ice with long sticks and realising that all we were really doing was frightening the duck we had to resign ourselves to the fact that the duck was stuck!

But then things took a turn for the worse when all our commotion seemed to rouse the other ducks and they came slipping and sliding on the ice to the stuck duck.  In my naievety I thought they were going to help their fellow duck. I even thought they had a cunning idea when they started standing on it as I thought the weight of two or three ducks might crack the ice but oh no, now it was a f****d stuck duck - any opportunity!!

It ended with us having to leave the duck there and resign ourselves to the fact that it would probably be there all night and die of exposure or something.  I spent much of last night thinking about the poor duck but this morning when we drove past, it wasn't there so it looks like it was a happy ending after all.

I do like a happy ending and the drink in the pub was good too!

What a fantastic day!  I had to leave half an hour earlier this morning for a meeting but it was great driving into work, less cars and more beautiful, frost covered scenery to see.  The poor ducks on the pond had no water to paddle in this morning they were just slipping and sliding on the ice.  The swans, however seemed to have 2 swan-sized holes, I presume they are heavier and their body mass must have warmed the ice up so they just melted through it - that could have woke them up with a jolt this morning!

And there's always the snow forecast for tomorrow, HP is getting very excited so I hope he doesn't get disappointed!

Well, had the second of the run of my friends' 40th birthdays this weekend.  It involved a trip to Exeter for a big party but it was worth the effort!  It's going to be a very long time before I get the image of T in a pink ballerina inflatable suit head banging....I suspect most people won't  be able to rid themselves of the image, its made worse by the comment of his partner E 'no-one will want to try that on after he's been in there, it'll be full of wee!'  So he's got to the age of 40 and his bladder has already given up the ghost.

That aside, it was lovely to see my old friends again and relive some memories it was also brilliant to have a good old boogie, even HP was up on the floor for much of the night, so certainly a fun time.

It's my turn next but I'm giving the party thing a miss, why have a party when I can go to everyone else's during the year!  D is talking about white water rafting for hers in July....we'll see, I quite fancy living at least until my next significant birthday!