Groupwise Getting The Boot 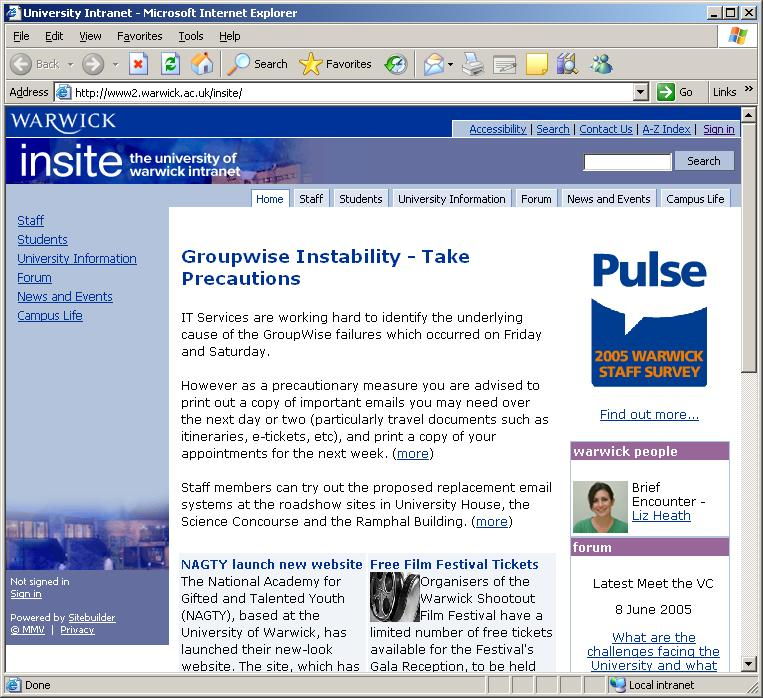 Groupwise failed over the weekend, just before the main leg of the E-Mail Replacement Roadshow this week.

Who knows whether more university staff are taking the opportunity to trail the systems proposed to replace Groupwise today than over the past two weeks is because of better location – University House among others – or because of the, dare I say, sabotage to make Groupwise seem even worse than it is.

In any case, Groupwise deserves to be let go. Microsoft Exchange/Outlook is so much easier to use and maintain, both from a user and IT Services perspective. Lotus Notes' staggering features are even more convoluted than Groupwise's, but at least it's stable and scalable.

What I can see students not being happy with is being pushed off to one side to a Sendmail -based system with web frontends - either SquirrelMail or MailMan.

As far as I can see Sendmail comes free with any Unix/Linux distribution. SquirrelMail, the more appropriate frontend, is free as well. MailMan, you guessed it, is free, too, but it is meant for managing electronic mail discussion and e-newsletter lists and as such too basic for personal e-mail.

The flipside of the issue is that money – and MS Exchange costs a lot – is better spent on the library when the majority of students sent up forwarding rules to their existing e-mail accounts anyway and never use the university e-mail system.

The student roadshow was last week, but if in doubt vote for SquirrelMail. MailMan looks like my 3 year old nephew designed the look and someone from 1996 decided on the features and user interface. MailMan is so bad, it seems like SquirrelMail has already been decided on and IT Services want to at least appear to be giving students a choice.

The staff roadshow is still on this week, so go and have a play.