Revenge of the Sith is crap #2

There is precisely nothing more to say.

I was going to do a whole Star Wars rant, but it will just make me angry and upset again, so I'll leave it at this.

The End of all Things

By which I mean exams. Ever. Done. My degree is finished!
Except for a very delayed project Viva on the 31st, but I'm hoping if I ignore it it will go away

After the Magnetic Properties of Solids/NMR exam this morning (otherwise know as "Roadkill", "What the HELL was that?" and "The worst 3 hours of my life"), my predictions for the year are as follows:

Actual marks will be provided on The Day of Terror for those bored enough to look in this general direction.

Odd to think that my first two years (70.8 and 61.9% respectively) might as well not have counted, but that's how the maths goes…

Anyway. Now I can reclaim my life and never set foot in the library again.

Welcome to an average day in the Group Study Room 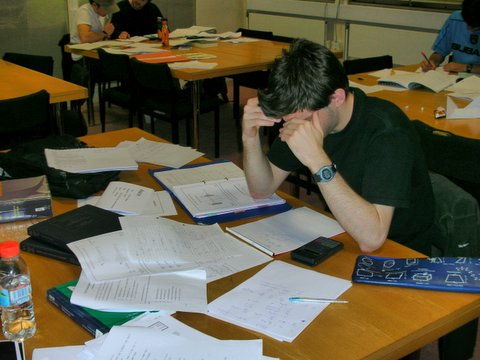 So the AI exam finishes at 5pm, and here I am back in my room.

Edit: Turns out I missed 1e). Dammit that was an easy mark thrown away :-(

I have done about 7 hours in 2 days, and that is pretty much it. I did the 2004 paper in 55 minutes and the 2003 paper in 75 (out of 3 hours).
I think I did pretty well in both, but I am now worried that this is false confidence and the questions that appear tomorrow will be such that I can't answer them – I know nothing about planning and am a bit shaky in some other areas.

There have been many claims and accusations made about this film – it is historically inaccurate, it is dull, lumbering and too long, Orlando Bloom is miscast, and even that it “panders to Osama bin Laden”. It is certainly no Gladiator, but that is far from saying it is poor. Yes, the first hour is a bit slow, but the threads begun there are woven together nicely by the end, so it is necessary. Orlando Bloom is a man with “Supporting Actor” stamped all over his face, but does a much better job here than I’d hoped for, to the point of being believable enough not to detract from the film.

Anyway, onto the heart of the matter. Personally I don’t really care about the historical accuracy on this occasion. For me, the message of the film is much more important. The whole Bin Laden issue has arisen because the Muslims are not portrayed as the bad guys, instead they are on the whole more moral and decent than their Christian counterparts. This may not have been the case historically, but the Crusaders certainly did their fair share of horrible deeds too, and this is the message of the film. It is spelt out explicitly by Hospitaler (David Thewlis) in precise agreement with my own feelings on the matter:

I put no stock in religion. By the word religion I’ve seen the lunacy of fanatics of every denomination be called the will of God. Holiness is in right action, and courage on behalf of those who cannot defend themselves, and goodness.

The phrase “God wills it” is used many times in the film, by both Christians and Muslims, often to justify an act of inhumanity by the speaker. I have not seen a better advert for atheism for a very long time, and for that I am very grateful to the film. The fact that, while the subject matter is obviously a religious one, the main character is the least religious in the film, and at the same time the most moral and good emphasises this point strongly.

On a side note, the battle scenes are particularly impressive for their lack of sanitization – war is a brutal, terrible, and confused event and should be depicted as such. One scene stood out for me – Orlando fighting desperately in the centre of a writhing crush of bodies, the action going to slow motion to show the seemingly never-ending struggle for the fighters, then speeding back up to capture the madness of it all.

So to those people claiming this film is support of Osama bin Laden’s view of the world I say this: you are missing the point. The message is that all religions and all peoples should try to live together in peace, and probably could if it weren’t for the Fundamentalists. If there is a better argument against organised religion I would dearly like to know it.

The Moron is the fundamental particle of Stupidity. Every "intelligent" creature, or body is born with a large number of Morons. However, the Stupidity of the body can be reduced, by a process known as Proper Education, until it passes the Intelligence Threshold, where the wavefunction of the Moron is smaller than hbar/2. At this point the body's Stupidity is no longer noticable, except in situations described by the Theory of Special Stupidity, for example when the body consumes large quantities of alcohol.

If the body is never provided with a Proper Education, its number of Morons stays fairly constant – Morons are stable particles and will not decay spontaneously. In this case, the body generates a Stupidity Field, whose strength is proportional to 1 / r2. As a result, and other body brought into close contact with the Stupid Body is highly likely to have its own Stupidity increased temporarily. This explains the saying

Never argue with an idiot. He will bring you down to his level and beat you with experience

As the Stupidity Field is proportional to 1 / r2, all Stupid Bodies increase the Stupidity of the whole universe. The Field strength can be attenuated by enclosing the Body in a padded, soundproof cell lined with 1 metre of lead, and throwing away the key. However, a far better solution is to throw the Stupid Body into an infinite potential well, and forget about it.

The education system is a big pile of rubbish

No, but seriously. How and why should exams determine how "intelligent" or good at a subject we are. Exams teach you nothing. Learning for exams is a process of peaking at the right time, short-term memory-wise, and then forgetting everything the day after the exam (or in some cases the moment you leave the hall). As someone with a pretty decent short-term memory, I benefit from this system rather nicely, but it is ridiculously flawed. I will leave this university after 3 years with a degree in physics, but with approximately the same amount of knowledge as I had at A level.

Now before this moves on to a rant about how I would never have applied for physics if I knew it was going to be mosty dry, seemingly abstract applied maths (oops, too late) let me pull back. This doesn't apply just to our course, it applies to everyone (at least, everyone doing science – not so sure about arts students). Whatever you are studying now, think back to what you were doing at A level. I can almost guarentee that you will be able to remember quite a lot of what you studied then, with a little thought and maybe a brief glance over your notes. Not so any more. A prime example of this is the Solid State Physics I exam we poor physicists took in April. Two weeks later whilst revising another module there was some overlap, but none of us (out of about 5 students, all good candidates for 2:1 or better) could remember a simple derivation we had learned by heart for the exam. Revision provides you with no long term knowledge.

So what would be better? What would make that piece of paper you receive at the end of it all worth more, or at least more representative of your ability? I would say that it is obvious – continuous assessment throughout the year – small assignments every week or two. It would encourage us to study more during the first two terms of the year, from which we could gain longer-lasting knowledge than that achieved by cramming the night before an exam. Sure, keep exams. It's a reasonable way to make sure that someone hasn't simply been leeching the work of his or her peers throughout the year, but I would suggest that they should be worth no more than 50% of every module.

Ok, so uni learning is supposed to be independent, but motivation can be hard to come by when you have no reason to work for most of the year. Give us that reason and we will become much more productive (well, most of us). We may moan about it at the time, but we'll be a lot better prepared when the exams roll around. In our first year we had a module called Physics Problems – 6 CATs (standard size phyiscs course), 100% assessed. Problem sheets were provided by every module and a certain number had to be completed each week to get the credit. Similarly, a portion of our maths module that year was obtained from problem questions. Why does that not continue throughout the degree? Why isn't it worth more?

The current education system basically teaches us one thing, providing we survive it – how to cope with the stress caused exams. It's that or go insane. Our degree certificates are symbolic not of our successful pursuit of knowledge or enlightenment, but rather of our ability to survive in a system centred around reducing us to burned out, twitching, and occasionally dribbling zombies once a year, every year, for the duration of our course.

Because it needs to be said

This is the website of the afforementioned Dave (Star Wars fanboy, see last post), current Production Lord of the Warwick Boar, as well as Games Editor. While I do not have particularly strong feelings about consoles, as I've never owned one and the only serious time I've spent using one is the XBox (his) currently sitting 10cm away from me – the evil genius has lent it to me to corrupt me and distract me from revision (as I think I have already said). Oh wait – that isn't a sentence, I'll try again. While I do not have particularly strong feelings about consoles, I completely agree with his point. A website who I read daily and whose judgement I usually trust (Eurogamer) has been extremely one-sided in its E3 coverage. Maybe they really think that the Xbox 360 cannot compete with the PS3, and maybe Microsoft are a bunch of rhetoric-spouting bores, but I can't help feeling that David is going to be proved at least a little bit right in this case.

Oh, and he thinks he's "too cool to blog", so posting a link to him here will a) annoy him and b)..erm..annoy him. I had something else there but it disappeared :-S