All entries for Thursday 17 February 2005

The Amitness Rating is a scale of bad taste, (where 0 is exquisite taste and 10 is Amit and chavs). For some idea of how you can obtain a 10, you must be able to say "Bad Boys is better than Shawshank Redemption", mean it, and not feel like you have just tarnished your soul and removed a small amount of goodness from the universe.

While I would like to claim that I have an Amitness Rating of 0, this would be untrue. In fact, I think my Rating is 3, for crimes such as liking films such as The Rock, Starship Troopers and Equilibrium, and music like Embrace's latest album. And Keane. Yes, I admit it.

Other ways of increasing your Amitness Rating would be liking EA Games (with the exception of Battlefield, because I can see some worth in that), or driving a modded car (which he doesn't, but I'm sure he would want to). Or you could be a Trekkie, because suprisingly he's that too.

You get the idea. So I pose you this question: How much are you like this man? 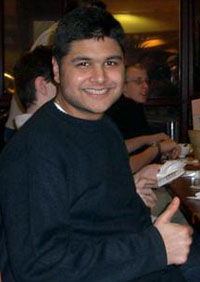