Back in the UK

Our trip back to the UK was indeed a very long one. Transitted in Singapore for 8-9 hours. Explored Orchard Road while it was pouring out of the heavens. I could see myself working in Singapore. It is such a shopping haven :) We freshened up at Changi airport. It has a transit place where you can shower and even take a nap. Our flight out to London was delayed for 30 minutes due to the busy traffic in the european airspace. We were later called for boarding. We had to stay for another good 40 minutes in the plane when a passenger decided to stay on in Singapore due to poor health. Am sure it was due to the endless delay as we had to wait in the plane for a very long time. And it was rather stuffy.

The flight was rather bumpy. But we slept through most of the turbulence. The sleeping was uncomfortable due to the cabin air being dry. They should have a humidifier!

Finally landed at 640 am. A friend picked me and JC from Heathrow. Sad to leave home but glad to be in London finally.

Have a blessed Christmas and a prosperous New Year 2007!!!!!!!!! Christmas celebration at home was rather relaxing today. A few friends came and gone. Now having me-time at the dinner table again writing this entry. Put some more stuffs in my luggage today. I pray that it will not exceed the weight limit. Am looking forward to get stuck into my work and get it over with as soon as possible. My friend Edna has currently passed her PhD and Naomi has just submitted her thesis!! Gosh That makes me feel so “kiasu” to finish mine.. well I still have 1 1/2 years to go … officially! God is definitely willing!!! Hmmm this could be my last entry from Kuching but shall see…. I do miss the cold weather… but I’m sure I will miss Kuching badly. Well you can’t have the best of both worlds. Visited my dad’s grave today. We lit some candles up and put lovely flowers on the grave. My nephews and niece enjoyed the visit a lot. Kiwan is the only one who has seen my late dad. The rest were curious to know how their late granddad was like.

It was such a nice breezy afternoon. The view of the narrow road that leads to the main village looked really nice with the moody cloud. Merry Christmas everybody!!!! Christmas is definitely a good climax to my holiday. It seems to be so surreal that I’m going back to the UK on 28th!!! Ah well…

We all went to the Christmas Eve service at church tonight after dinner. We then took family photos. “We” comprises of my grandparents (both are in their 90s), mum, sisters, bro-in-law, nephews and niece- a good span of 4 generations. Happy to have something to remind this holiday of. I have 2 other sisters who are not with us this Christmas. I pray for all the blessings in the world for them and their families. 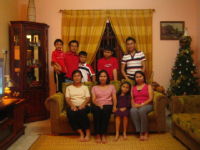 Well its not an entry about carol choir. We were informed that the carol group from the local church would pay us a visit this evening. The problem was we didn’t know when. So we waited for quite a long time. We took some candid photos in our living room (hmm i seem to be wearing the same polo shirt in most of my photos on this blog!!) The kids were a bit over energetic due to the amount of sweets they have been whalloping the whole day!! Anyway, the carol group finally appeared at the 2130 hour. It was fun for the kids. It did add the festivities to the atmosphere.

Been away for a week. It was a good break from Kuching but Kuala Lumpur (KL) was too busy for a “kampung” boy like me. Thou I love the shopping bit, people can be a bit rude and the traffic was simply overwhelming. And it was quite an adventure from the beginning. I’m glad that the airport is new and comfortable. Our flight was delayed (well they called it RETIMED). So had the time to browse the all new “des magazins”.

When we arrived at the LCC-T KL, it felt like we were in another country and it was as busy as the central court of the Midvalley Mega Mall. Thou it was not as festive and colourful!! The trip to our hotel was far from simple. The AirBus was not well managed. Someone rushed into the bus upon hearing that there were 5 seats left and enough for only me and my family. Thank God someone voluntarily gave up his seat so I won’t be separated from the rest. When we arrived at KL Sentral station, we were informed that no taxi would go to our hotel due to the infamous traffic jam. So for the first time ever, we travelled to Midvaley on the jampacked Komuter!! It didn’t stop there!!! Travelling from the platform to the Midvaley Mega Mall (where Cititel Hotel is located) was a nightmare. I’ve never been in the middle of human-jam before!!! Couldn’t even move! But alas, we reached the hotel in one piece. Eunice was already there waiting. It was not a good day for her as well. She lost her mobile phone at the lobby. There are no honest people in the world anymore!!! Ah well.

We were all refreshed the next day ready to face the shopping crowd! My sisters were all enthusiatic but my nephews didn’t share the same excitement. They knew that it would be all walking and looking at stuffs that were not really useful :) But we do look happy in this photo with festive decorations in the background. Shopping we did plus the local cuisines we whalloped. It was a great day. Tiring but satisfying haha. We stayed in that area for 2 nights.

We left for Corus Hotel in Ampang (5 minutes walk to KLCC) on Wednesday. The hotel room is not as plush as the one in Cititel. But the lobby was lovely. Hence the photo taking session before we left for the KL Aquaria, which is an underwater world exhibition. The kids (that include us haha) enjoyed it. It was breathtaking.

More pics of the underwater world in the gallery.

My sisters and the kids left for Kuching on Friday. I extended my holiday and stayed at Eunice’s. Jacey was there as well. Eunice chauffered us around showing us the sites in her vicinity: the Curve, Ikano, One Utama, Mount Kiara and Hartamas. We did enjoy ourselves but I was quite tired from the long hard shopping spree I had with my sisters :).

Eunice drove me to the LCC-T. The traffic jam at the Midvalley area enroute to the airport was horrendous. But we got there in the end. I’m still recovering from the trip now. Even writing this entry makes me feel a bit lethalgic. Gosh I only have a week and a half before I make my way back to the UK!!!!

ps: when you look at the pics in the gallery, my nephews Kiwan and Kinua are 10 and 8 years old respectively. But they are so tall for their age.

Collected my new pair of spectacles this afternoon. It’s pretty lightweight and clean looking. As you can see they are frameless and I believe that they are Paulo Pilipe. Loving them. At least now I can see blemishes on strangers’ faces. Haha Went to Unimas today. Met my bank manager. He didn’t even recognise me with a new hairdo and a more slender built. Thank God he was at the bank. I didn’t have to queue up. Special attention as always. Its good to be home haha.

Then JC and I visited our colleagues at the faculty. They were so suprised to see us. Dr. Jane is now the head of program and her office is hugeee. The view from her window (shall I say wall!!) is breathtaking. Went to see Dr. Alvin. As usual the whole atmosphere felt alive when we were all together. Unimas is not really a bad place but they did advise us to grab any good opportunities in the UK after our PhD. Point taken ;)

A pair of glasses I've made The original plan i changed. Unimas I didnt go. Took my mum to the optician I did. Rainy morning it was. But through the thunder and rain we braved. Before midday, our glasses we both purchased. Costed us 610 RM they did. Worth it it was.

What a boring warm afternoon!! Mum was busy with her flowers. Nephews and niece were hopelessly restless being kept indoor annoying each other insane. So I had to come to the rescue. Took them out and they all went wild (except for when the Vain Ambition was in order… pose and click) Haha. Thank God that the outdoor space is big enough to contain their energy. We later made our way to the extended backyard where we have 2 ponds surrounded by the lushness of the trees and bushes. I was surprised that the insects weren’t bothered to turn up and have us for their afternoon tea. Lucky us! Below are the snapshots taken this afternoon. You can see my mum in her garden attire, nephews (Kiwan, Kinua and Ethan) and niece (Claire).