I will be DJing at Political: A Gender in London on Thursday 1st September.

"Join us for a night to remember as we celebrate gender-transgressive voices and the powerful people behind them. Cabaret, comedy, music, poetry – it’s all here, and every penny of profit goes to gender-diversity advocates Gendered Intelligence."

7pm - 2am at the Royal Vauxhall Tavern.

I will be DJing once again for the Queer'ists art project - this time in Coventry. It's an awesome exhibition and all are welcome so please do come along! 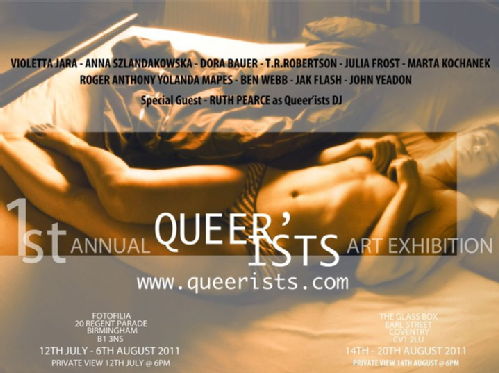 How to work whilst London burns?

I've been following the news quite heavily since the weekend and obsessively since last night as riots break out across England. I have many friends in London and Birmingham and am concerned for their safety. I'm a shamelessly political individual and have strong views on the way our country is run, but regardless of blame (and I'm very much inclined to blame certain authorities and social institutions for this mess as well as the morons running around setting fires to people's home) the whole sitution is just plain disturbing.

New figures released by the National Union of Students indicate that over one third of women students who identify as lesbian, bisexual and/or trans (LBT) are the victims of a sexual assault.

Is our government fundamentally opposed to political freedoms?

When the current coalition came to power, we were promised a “liberal” government by David Cameron as well as Nick Clegg. The Liberal Democrats and Tory “left” seemed to be offering an almost classical liberal approach entailing individual autonomy in the realms of public, private and economic life.

This philosophy is being used to defend the privatisation of public services, massive public sector cuts and the scrapping of regulations originally designed to protect workers and service users alike. Still, at least this is a government prepared back individual freedoms and roll back the authoritarianism of the Labour years…right…?