Devon Diaries and Dairies and Lashings of Clotted Cream

All the pictures from the weekend are here

Friday 12/08/05
Leonie and I arrived at Paignton around midday and met Thomas and Helen off the train. Thankfully Leonie was not relying on my map-reading skills to get us from Bracknell to Paignton, otherwise we might have ended up in Bognor by mistake (where is Bognor anyway?). Had fish, chips and mushy peas, birthday cake and wine on the beach followed by a round of crazy golf, 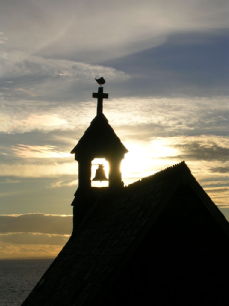 during which I learned that I have no hand-eye coordination and should probably try to curb my swearing in the presence of small children. Thomas had his hegemonic masculinity challenged by a family behind us who thought it was funny that the only boy in the group was taking the longest to pot the ball. But then I lost, and we all got slightly sunburnt.

Drove to our B&B along the coast road, which entailed a car ferry crossing at Dartmouth, beautiful sea views and roads where we had to breathe in whenever we passed another car. Went for dinner in Outer Hope Cove at slightly scary Fawlty Towers-esque restaurant charging £10.50 for a cheese omelette, but luckily we were offered a slightly cheaper bar menu instead, as well as the opportunity to sit 'with the other young people' in a tent. Failed to find the 'wall to wall pubs' tantalisingly proffered by the Rough Guide so we had to make do with Fawlty Towers, but declined the offer of the tent, tempting though it sounded. Encountered a badger, a ghost police car, and glow worms on our return to the B&B, and nearly got run over multiple times as had forgotten to bring torch. And so ended the first day…

Saturday 13/08/05
Leonie, Helen and I got up at 7.30am for a pre-breakfast run. Unfortunately, we started off by running 180 degrees in the wrong direction (unsurprisingly on my advice), but in doing so discovered Marlborough, which did appear to have wall to wall pubs, unlike Outer Hope Cove. Ran about 3 miles which set us up well for our cooked breakfast, fruit, porridge with clotted cream, toast, kippers etc. etc. 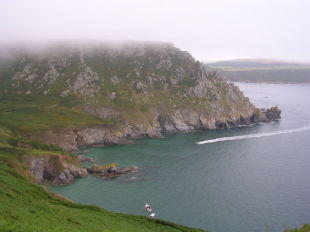 Despite the fact that I was dragged up mountains from an early age, subjected to orders of 'at the double!' when confronted with sheer cliff faces and scree slopes, and told by my father that mud, driving rain and biting winds would 'make a man' of me, I still came to Devon rather ill-prepared for hiking, with little in the way of sensible clothes for a walk characterised by serious lashings of rain and wind (but unfortunately no ginger beer). Worst of all, didn't even bring a hip flask! I appear to have learned nothing from those early childhood experiences.

Coastline was beautiful until mists and fogs rolled in, and 7 miles later we arrived in Salcombe looking like drowned rats and promptly stumbled into the nearest pub. Which was full. As was the one next to it. And the next. Arrrgh! We finally found somewhere for lunch and attempted to dry off under a broken hand drier. The 3 miles back to the B&B were spent 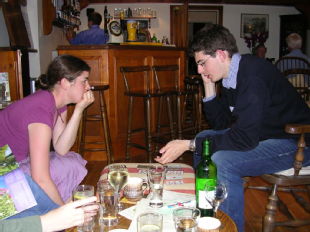 bemoaning my lack of dry clothes and stupidity in wearing shorts (stinging nettle laceration) whilst watching the slugs play.

Made it back in time for tea and the remainder of Thomas' chocolate cake, and since weather was still manky we played cards in the bar until dinner time, at which point I consumed a further 6932 calories (nearly all clotted cream related). Burned it off with an enthusiastic round of post-dinner dominoes, which reminded me of being 11 and walking the Coast to Coast with my dad and stepmother.

Sunday 14/08/05
Weather gorgeous this morning, and managed to run in right direction towards Hope Cove today- again probably about 3 miles. We accidentally herded a load of cows along the track with us, but the stupid things wouldn't move to one side to let us pass. Anyway, it was a beautiful morning – sunny, fresh, the smell of the sea lingering on the breeze – but best of all we found the part of Hope Cove (Inner Hope) containing the wall to wall pubs. As it was only 7.45am, we resisted the temptation to go in. Big hill back up from the sea to finish, but felt fantastic and ready for a full cooked breakfast (and juice, fruit, cereal, toast, porridge, and lashings of clotted cream – you get the picture). 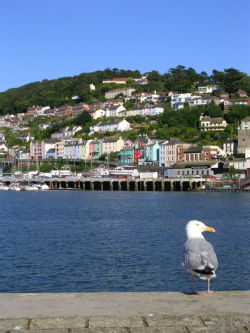 We headed off to Dartmouth to catch the 'Tally Ho' school bus and the 12 o'clock boat trip up to Totnes, during which we were regailed by many an amusing tale about sixth formers shagging in the local nature reserve. Oh and saw lots of birds – egrets, buzzards, cormorants and ducks (of course). The stories were not quite so amusing on the journey back to Dartmouth, but luckily we'd had a pub lunch and perused the streets of Totnes in the interim period, and so they almost sounded original given my dodgy short-term memory and inability to remember what I did two hours ago.

Speaking of which, the list that ensues was supposed to be written up properly at a later date (I was too tired and probably pissed to write in full sentences at the time), but I can't actually make any sense of it now as a whole three days have lapsed and it all seems like a bit of a mystery to me now (particularly the reference to 'amazon' – what the hell is that all about?). Thomas you were right, you said I wouldn't remember. So you'll just have to fill in the gaps yourself and make it up:

Monday 15/08/05
Ran to Hope Cove again before breakfast this morning – weather was perfect, sunny, not too hot, sea breeze, and the cows didn't come for a run with us this time. After eating, packing, paying etc. we drove to the sea along the scariest supposedly minor roads (according to the OS map) I have ever witnessed. Mile upon mile of single track road bordered by thick hedgerows with no passing places and no way of turning off. We all just closed our eyes (except Leonie, who was driving) and desperately hoped we wouldn't encounter another car. 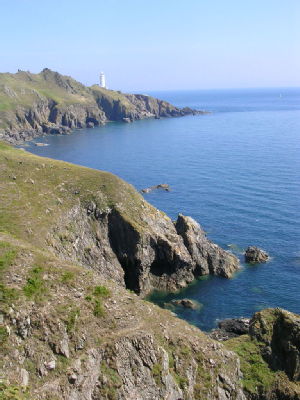 Largely unscathed, though the poor car looked filthy, we set off on a hike along the clifftops to Start Point lighthouse, a route which took us via the ruined village of Hallsands, which washed away into the sea after a violent storm in 1917. We walked a couple of miles further along the coastline from here – spectacular scenery, perfect weather and lots of wildlife. When we got back to the car we went swimming, carefully avoiding the jellyfish, and got an alternative view of Hallsands from the sea. Finished off with cream tea (well tea and icecream for me) at the Trouts, which is a hotel originally established by four sisters from the village that washed into the sea.

We left at 5 o'clock, dropped H&T in Newton Abbot and drove back to Bracknell, a drive which sadly wasn't as memorable as the rest of the trip. All I can say is I had a fantastic four days, full of exercise, food and fun, and it felt much longer than a long weekend too.

So thanks to Thomas for having a birthday, Helen for sorting it all out and booking it, Leonie for driving along those single track nightmares they call roads in Devon and for the lift to and from Bracknell, and of course to all of you for the great company and a really lovely weekend. Thank you x