It’s that time of year and I’m determined not to get ill despite the best efforts of my fellow commuters to infect me with their lurgies. All the pretty autumnal leaves are turning to mulch on the commons and in the parks and everything is going earthy and heavy and saturated with squelchiness. I haven’t been for my weekend run yet and it’s going to get dark soon, plus I’m meeting a friend for coffee in 40 minutes so unless I want to power run at double my normal speed… Tired, so tired, feel like I’m on a conveyer belt and I have to keep running. Trying to be more positive (no more black clothes, I’m only 25) and do some voluntary work and make an effort to do things that scare me (like meeting new people).

Dreamed I was back in Taiwan the other night; I felt free.

I’m going back to Yorkshire next weekend. I want to breathe clean air and run in open spaces (not looping round and round the same circuits on Clapham Common stopping for traffic whenever I hit a road), and sleep in a quiet dark room where I don’t wake up the moment the neighbours upstairs slam a door.

I’ll just have to run with the gym bunnies this evening. Hop, hop, hop along bunnies. I’ll run into work on Wednesday morning too. 5 and a half miles. I hope I get a place in the London marathon this year… I went to Oxford last weekend, the first time I’ve gone back since I graduated (over 3 years since I finished finals and left, 2 years since graduation now). I was almost dreading it, apart from meeting up with Leonie, Thomas and Helen of course, as arriving in Oxford always used to provoke very strong feelings in me – mostly positive – but I thought that I would feel an overwhelming sense of nostalgia when I returned.

So I got off at the train station along with a couple of Eton boys who were scoping out the potential of the place as a future abode. Walked towards the town centre. Past the puffa fish restaurant. Down George Street. Felt nothing (George Street still a bit of a dump). Saw the modern language faculty library from a distance. Down Broad Street (still feeling somewhat detached). Went into Blackwells to use the loo. Wandered round the modern language section. Same medieval French texts on the shelf (good old Chanson de Roland). Weirdly familiar but didn’t make me feel anything. Walked towards college. Came down Merton Street. Heard the Merton chapel bells ringing. Into college and round the gardens. All very pretty and lovely, but I didn’t particularly feel anything – it didn’t feel like a place where I used to live.

And Oxford is small. I think someone might have shrunk it, because I’m sure that when I was 18 it wasn’t that tiny. The buildings are all little (most of them no more than 3 stories high) and it only takes 10 minutes to walk across town. I blame Martin and his weirdy chemist ways.

Anyway, I had a lovely day in the end, but mostly because I met up with friends, went for lunch in Gino’s, found the (newly opened) Primark (largest one I’ve ever been in!) and went for coffee in Blackwells. Lovely. But I didn’t feel nostalgic and the magic I remember has gone as the people I cared for who lived there have moved on. Although it was nice to go there for the day, it is now just an ordinary place for me.

One of those days 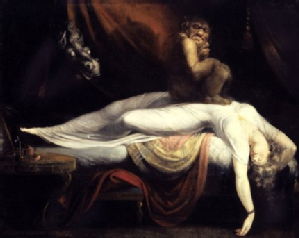 Just wanted to curl up in bed today and cry / hide / sleep for a very long time. They need to install beds, duvets and bean bags in a nice quiet dark room somewhere in the basement where sleepy civil servants (i.e. me) can go and slumber until they feel better.

Bit of a mongrel? To fulfil my worrying growing addiction to reality TV (now I’m only snobby about property development shows, gardening programmes and Big Brother – basically any other gubbins goes after a day in the office), this evening I watched 100% English, a programme in which eight participants gave a DNA sample in order to ascertain their genetic geographical roots.

All the selected participants held strong convictions about national identity and what being English means. All of them were white, born and raised in England, and convinced that their genetic makeup would prove they were quintessentially English in origin.

Frankly, I’m not surprised that most of them turned out to be, in the words of one participant, “a bit of a mongrel”, but what really shocked me was most of their attitudes  first of all a militant conviction that in their veins must course “pure” anglo blood, secondly somewhat dubious remarks about race and national identity, and thirdly (most bizarre of all in my mind) passionate pride in the country in which they happened to be born.

I say bizarre, because I have never felt proud to be English, I don’t identify with England, and I have never understood what it means to be patriotic.

The only aspect of England that I actually like is its diversity, and maybe for the first time, since living in London, I am starting to feel that maybe it isn’t such a bad place after all. Obviously London is hardly representative of the rest of the country (when I go back home to Huddersfield sometimes I struggle to believe it’s the same country)  but the idea of a huge swirling melting pot of cultures, cuisines, languages, skin colours, art, music, traditions, religions, life itself greatly appeals to the nomad in me, even though I know my romantic ideas to be illusions in themselves.

Personally I would be thoroughly disappointed if my DNA makeup were anything other than genetically diverse, but knowing my luck I’d probably come out as 98% northern European or something boring like that.

Unlike the ethnic English campaigner who threatened to sue the programme on learning about her possible Romany origins, I felt reassured by the comments of the 18-year old army recruit who had just discovered that his DNA originated from at least a quarter of the globe.

For racists to find out that part of them may be what they have discriminated against for years, well that would certainly throw them off their game he said.

As he looked at the miniature globe before him, you could see his sense of his own global horizons visibly expanding on camera.