France to Spain to London to Zagreb

Been in France since Wednesday evening, staying in Ceret which is the town where my mum and Stephen have their studio apartment. This meant we had three full days before flying back to London Luton early (too, too, painfully early) this morning.

Besides wandering around Ceret itself and eating lots of stuff, we also visited Collioure, which is a small town on the coast, went to a tortoise sanctuary as well as a bird/wildlife reserve. Collioure is lovely, but very busy in August – still, at least it was warm unlike when I last visited in January 2003 (snow!). The tortoises were brilliant, especially the shagging ones with the "characteristic grunt". Disappointed with the bird reserve as didn't see any flamingos, but we did watch people kite surfing in the sea and along the beach. 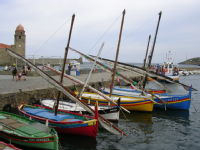 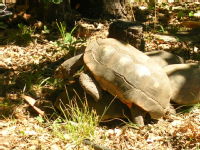 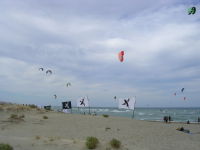 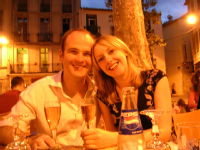 We also spent time in the Ceret art gallery, the musée d'art moderne, as well as looking around other private galleries in the town centre. Not to mention wandering around the Saturday market, eating out in the main square "Place des Neufs Jets" a couple of times, and eating chez ma mere et Stephen. It was a lovely few days and I'm feeling very close to Adam.

Today feels a bit like a bewildering yet lucid dream, from pulling open the shutters to discover it was still dark in the streets outside, the sun only beginning to rise above the foothills of the Pyrenees as we left our hotel room, the fuzzy blur of the drive to Girona airport (quite literally, as I was sans contact lenses), the two plane journeys, the brief time spent in Luton airport reminding us of the utter shiteness of Britain, meeting Mark and checking in for flight no. 2, the turbulence as we began our descent to Zagreb…

And then the pricey airport bus to the city centre, realising that we needed kuna (not euro) if we were to get anywhere, particularly if we were to get anywhere without getting ripped off, trying to figure out which direction to get the tram, where to get tram tickets, how to validate said tickets, whether we had got on the right tram anyway, where to get off, and why hadn't I printed out the map to our hostel in the first place?

Luckily we found the hostel without too much trouble, and the owner of the hostel was really helpful and even helped us order takeaway pizza and pivo. All of which slipped down a treat after a hot, cold, tiring, busy, confusing day which ended with me feeling somewhat helpless and disempowered by my inability to speak the language.