All entries for Saturday 24 September 2005 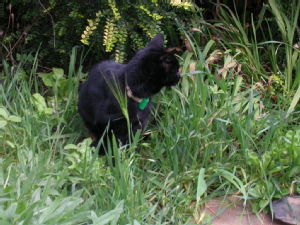 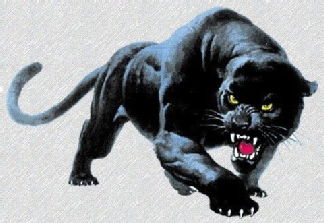 In the mind of the little kitty on the left, she's just like the big kitty on the right. It doesn't matter that little kitty is 17 years old and stone deaf, spends most of her time conked out in a patch of sunshine, and has never been a particularly skilful hunter (I think she caught a mouse. Once. In 1990)... my cat Muffkin persists in her dogged (catted?) belief that she is in fact a ferocious, mean, lean fightin' machine.

Yet she rarely acts on her hunting impulses. She knows that she could do it if she had to, but most of the time she's content to spend her days slumped in front of the bird table, regarding it as a peculiar form of feline television – distracting, engaging, but part of an unobtainable fantasy world nonetheless. The food that my mum puts out for the birds serves as a particularly effective form of bait to draw in the entertainment, something that is probably akin to paying the TV licencing fee.

Recently my mum has started to put out nuts as well as seeds, and a little fat squirrel has been paying regular visits to our garden. He dashes hither and thither, occasionally pausing to nibble on a hazelnut, in his incessant quest to bury every last nut in strategic places all over the garden. And the nuts keep coming, a seemingly endless supply. So the squirrel keeps going. Actually, I think my mum should stop putting out the nuts for a few days so he can put his feet up and rest for a bit.

Anyway, there was Muffkin, basking in her usual patch of sunshine, and there was the squirrel on the other side of the patio door, having just discovered a new hiding place for the latest nut. She didnt notice him for a good ten minutes, snoozing away contentedly while he busied away with his project of digging and burying his nuts in a nearby plant pot. 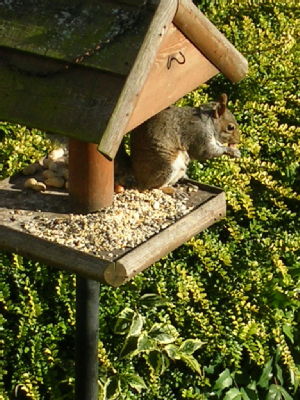 But as dreams of mice waned and reality began to seep back into her consciousness, she slowly became aware of some interesting activity taking place just inches away from her face. She opened one eye. And then the other. And an expression of ferocious glee shone forth and distorted her usually benign features, as she leapt to her feet with murderous intent.

Grrrr! Im a big scary panther! she growled menacingly, making a lunge in the direction of his tail.

He took one look at her, rolled his eyes, and scampered back to the top of the bird table to finish eating his nut.

Muffkin patrolled the garden for a few minutes, before heading back to her cat basket. Hmmph, that showed him, she said smugly.