Here's Adam with the bus cake we made for Thomas' birthday party last month – luckily no one actually tried eating it given how liberal we were with the red food colouring (well you can't have a pink bus, except during the summer of the X12 last year): 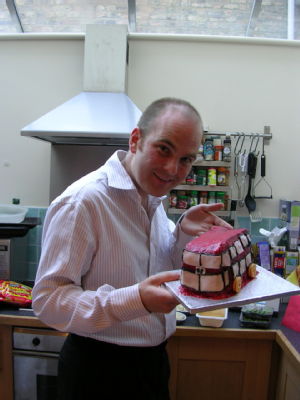 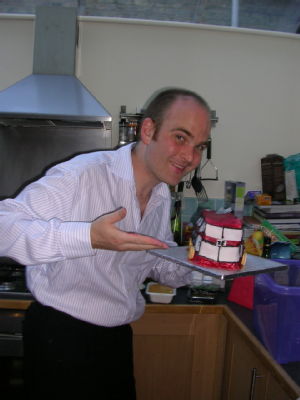 Went out last night for someone's leaving do – meant to stay for just one drink after work but ended up leaving just before midnight instead – at least i DID make the last tube this time. Briefly went to watch a comedian who wasn't very funny; he was of the type that doesn't have anything original to say so just works his way round the audience systematically picking on people, a technique that quickly starts to wear thin. Luckily the person I was with protected me admirably by giving as good as he got, but we didn't stay for long. And at least it was free.

Didn't eat enough (one 50p sandwich from Benjys that was starting to curl up round the edges) so I got a bit tipsy, and started talking about my MA dissertation to some people I'd just met… it seemed relevant… at the time. Then i got stuck in the middle of a rowing (as in fighting not boats) couple all the way home on tube including someone i work with and had to try to persuade his girlfriend not to storm off and get on a train to Southampton.

Luckily I had the sense to make some tea when I got in so I'm not hungover today.

Yesterday was a really, really GOOD day, both at work and in the evening. I met lots of new people, and started organising a conference, and found out lots of useful info, and called people, and generally just didn't allow myself to be scared or anxious about anything. Which was refreshing.

Now I have to try to heave my lazy lumpen self out of bed, preferably make my legs perform a running motion for an hour or so around Clapham Common, before heading into town to meet Anna at the Tate Britain.

*as they say in Quebec