…I went on holiday to Kending for a girlie weekend. Emily (my flatmate) and I went running (well, walking quickly) with the 'Hash House Harriers' in the tropical national park and saw coral rock formations, lava bubble caves and pineapples growing on trees. I discovered mojitos, got very drunk at a Thai restaurant and decided to sleep outside, where I was bitten to shreds by all manner of tropical jungle beasties.

…I was planning a lesson about France with my class of 11-year olds, which mostly entailed eating pain au chocolat, croissants and cheese. 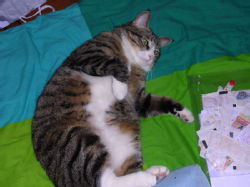 …Kiersten, Emily and I adopted a stray cat called Buddha (right) who was big, fat and rampacious. He hated all people (except for me) and spent most of his time biting and clawing anyone who came to visit our apartment. He also liked to drag my duvet around the apartment making mad passionate love to it. Occasionally he tried to hump me when I wasn't paying attention, and he also had a worrying fetish for licking my flip flops.

…I went hiking in Yangmingshan (national park close to Taipei) which proved to be rather more exciting than I had anticipated. At one point I was sliding down an almost vertical mudslide clinging to a small piece of elastic. I also saw some very weird hot springs that smelled like rotten eggs and looked like the surface of the moon, except rather more colourful. 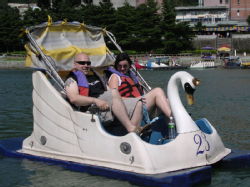 …I drowned my mobile phone and digital camera in a pedalo.

…The family I tutored took me on a daytrip to some hot springs, and made me sing Like a Prayer on a crowded coach at 7 o'clock in the morning.

…My Taiwanese friend Lynn took me to a fabulous dumpling restaurant and I fell off the back of her scooter on the way home.

…I went to the dragon boat races. 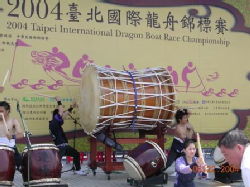 …We were planning a camping trip to Green Island for my final weekend in Taiwan, which unfortunately never materialised because there was a huge typhoon and we couldn't leave our apartment.

…I was eating fresh mango for breakfast every day.

…I was very excited about coming back to England, and very much looking forward to graduation and seeing my friends.

…I'd been away from England for over 12 months and hence had forgotten why I'd wanted to leave in the first place.

…I work in Leeds two days a week.

To be fair, we are only two days into the month of June and there's no typhoon in sight.