Jean Renoir’s The River is a truly wonderful piece of work that caught me very off-guard. I have to say, I’m not really acquainted with later-period Renoir at all, so to bear witness to this in all its technicolor glory… I mean, wow. Few films can rival this for sheer beauty in that sense. In actual fact, the one that immediately struck me as comparable was Powell & Pressburger’s Black Narcissus – which I then found out was written by the same author as Renoir’s film! Madness.

It really does strike me as something of an anomaly within his oeuvre tho: a gorgeous mood piece, which – unusually for the director – places its women at the forefront. However, it’s nonetheless equally adept at deconstructing the role of masculinity in alien environments: I love how the four principal male characters (the father, Capt. John, Mr. John and Bogey) all utilise India for different gains (imperialism, escapism, immersion and mastery of nature, respectively.)

The awkwardness inherent in pretty much all of the performances is completely offset by the beauty of the film itself imo. It’s amazing to note just how static Renoir’s camerawork is here, it’s as if he’s got the painterly images of his father on the mind at all times. Moreover, the film gently but brilliantly exploits its dichotomy between the documentary-style exposition of the camerawork + the narration which memorialises the past as some sort of artificial reality. 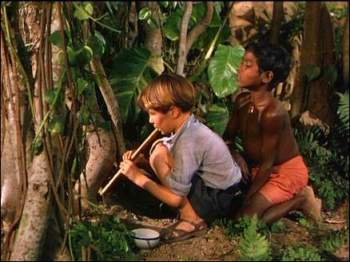