Watching all the clips of Menander and reading about there performance of Samia (an obvious type-o, they mean Samiad, lots of wishes surely! remember the one where they went to the future? classic!), anyway I thought it might be worth mentioning a play I saw performed entirely in masks and without words…

I saw 'Island' by Trestle theatre company in Lancaster a couple of years ago and it was amazing. Based on a true life story of an elderly woman found dead on a traffic island the story revolves around her life and how it has lead her to become trapped on this roundabout. I remember coming out of the theatre and talking to my mates about it, and we all could imagine the play with full dialogue! We almost remembered it like that! It was a wonderful comedy because of the way the masks were brought to life by gestures and movements that matched them perfectly. For example the po-faced mask walked pompously and the jolly round mask was a road worker who had some hilarious gestures.

The perfect thing about Island was that it could have been watched by anyone of any language. So it's a nice little reference point for me when imagining the use of masks in Greece. The difficulty for the actor I'd think is the fact that they have to perform all the side effects of an emotion rather than the expression itself. For example, slumped shoulders for disappointment, gestures of disbelief for confusement. etc.

The article in reference to the play '5 children and it', sorry, 'Samia' is very useful in understanding more details in the Old comedies and how they were transferred to Rome. For example the role of women in the plays, questions that were raised. And disappointingly, that there was and abandoning of masks. Jim Henson would not be proud. Interesting links at the end to slavery to the media and sitcoms.

*1. Consider the depictions of mythological scenes:

i What are the main similarities and main differences between the way in which the death of Pentheus is depicted in this fresco and in Euripides' Bakkhai? (Use an online text of the Bakkhai if you do not have your copy to hand.)*

The similarities are simple ones, the fir branches and the rocks appear in both the Bacchai and the fresco. However they are not the actual cause of death in the Bacchai, the fresco suggests that he's about to be stoned and thrashed to death. In the Bacchai the maenads fail to get him that way, and have to pull a tree down and then claw him to death, dislocating and then pulling off his arms and clawing the flesh from his chest.

The Bacchai is far more brutal than the pussyfooting fresco, but then would you want a man being clawed to pieces depicted on your wall?

The fresco depicts Agmamemnon with his finger to his lip in self-debate, Iphegenia with her arms towards the heavens pleading as she is carried by two men and Klymentestra, hooded, hanging her head in mourning on the left. In the sky there are two classic depictions of Artemis (the goddess who is preventing the fleet from leaving for Troy), The deer was the animal most closely associated to Artemis, and both her and her brother Apollo were skilled archers, hence her depiction with a bow. I am confused as to why there are two depictions of her.

This situation is very close to the one referred to in the Orestia but with the reasons for the action clear and made physical, ie. Artemis' presence in the sky.You can almost see Agamemnon pondering the lines 'can I choose either without doing evil'

Similarities are there because it's the same story! duh. Differences may exist because there were some changes always made in the transition from Greek Myth to the Roman ones.

The frescos aren't really a useful resource when considering 5th century BC Athens. For a start there would have been an evolution of ideas in the time inbetween. And secondly they depict the myths, not the theatrical experience of them. 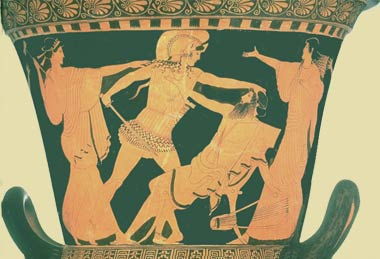 How to write a good analysis??

Pictures, although not a necessary element of answering the question, do provide backup in immediate understanding of the content. Plus they break up those huge reams of text with a bit of colour.

The General worship of Hugh Denard that lightly breaks up comments, along with the immortal words 'Purple, purple, purple' are hugely beneficial to the group, not to mention the country as a whole.

Some people ie. Scarfed Jack, prefer to punctuate their work with satirical wit. Which is a blessing because he writes so damn much.

Sparse but plenty of notes can make for difficult reading, just the paragraph will do.

Kate suggests a rating system may be a good idea, she's right.

A great resource to establish some geographical knowledge of the places we're talking about especially as it labels the places in their antiquitous names. Helpful.

Very detailed descriptions of locations such as the pantheon. Especially useful are documents such as the one describing the differences between different types of column. A trivial topic maybe but a good example of the kind of detail the site goes into, also includes a good number of photos for most articles at a useful resolution. So providing a good background history of Greek architecture, which may be useful when considering the skenia or other parts of the 'theatron'.

Hundreds of photos from seemingly anywhere touched by antiquity, unfortunately most are accompanied by no description at all. Therefore it could be useful if you knew exactly what you were looking for but far less so if you didn't.

An extensive links page, not really a website in itself, but a portal to other sites containing images and descriptions of theatres and other structures. Several of these have 360 degree quicktime pictures allowing you to move your view over the whole theatre. A good variety of sites linked into this one place.

3) http://duke.usask.ca/~porterj/skenotheke.html – This site provides a directory of useful websites in this subject, therefore making it a great starting point when setting out to research practically anything on Greek and Roman theatre, not to mention even Asia Minor, Aegean Islands etc. It is also far easier to navigate the others, wth one simple page where all the links are listed according to their country of origin, it is vastly uncluttered compared to the others. Making finding a certain picture or theatre quick and easy and browsing unconfusing.

4)http://www.theatrehistory.com/ancient/greek.html – Seemingly anything and everything to do on Greek Theatre. Including biographic notes, architecture, records and preservations of the original plays, the roles of different elements of theatre (eg. the chorus). Found by searching for 'Ancient Greek Theatre' on google, an obvious but effective searching method. It should be added if only for the structure of the site, for example if you click on the biography of Aechylus you get a list with it of his plays with a brief history and synopsis of them. It doesn't always go into great detail on anyone subject, but is good for browsing or clarifying things.