Todays session started off with Jack showing us how he'd been playing around with Margaret Thatcher. Jack and Ian have put together a couple of fantastic tracks mixing voice over and some incidental music, I think this is the one they decided they wanted in the booths, but I'm not sure.

The Collage group have expanded into doing a collage and two shadow screen performances, which we've incorporated into the main layout hoping they'll be happy with it.

Today was mainly about getting the piece planned as a whole, and what we wanted the audience to experience. At the expense of some of the freedoms we wanted to give the audience I think we're now confident that we have a fully planned piece with few grey areas. The biggest change to the previous incarnations of the piece was the decision to split the audience at the door into Male and Female in order to clearly set the themes in concrete from the beginning, but more importantly to give the two genders a very different experience and personalise the issue to them. Admittedly this means that the freedoms of the audience has been limited. But I like to look at it that now the audience is no longer in control, they're lost and stuck in the middle of this world but they have the freedom to explore it. 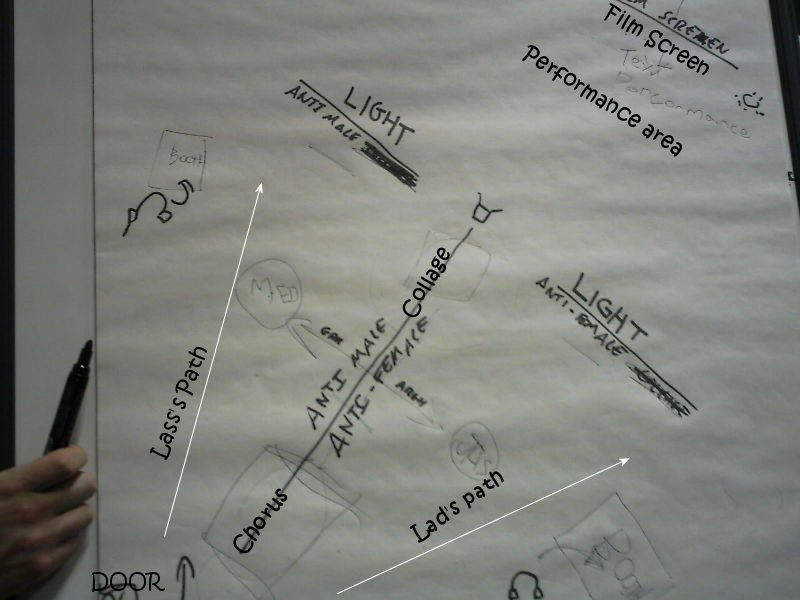 may have put the chorus in teh wrong place there, not sure..
We also talked alot about the performance, which is now a little difficult to explain but involves the relationship between Jason and Medea, the kids, a bedsheet, and death. woo.