Not to blow my own party blower…

Follow-up to For It's a Jolly Good Fellow from The randomness of tomorrow, today!

I know I say this every year, but Happy Birthday The randomness of tomorrow, today!!

Gosh. Four years old today. My how the time flies...

Google App Engine is quite easy to use

I made a Media Library using Google App Engine, if anyone's interested. It allows you to build up a list of all your various media (DVDs, CDs, video games, etc.), categorise them by type, rate them, and keep track of any Items that you've lent to friends.

How on Earth does this happen!? 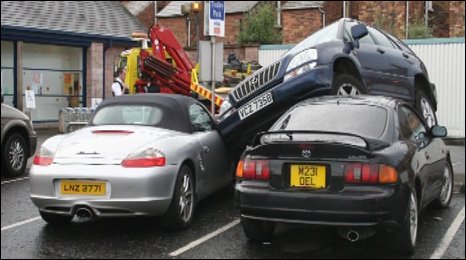 As I've mentioned before, I want an iPhone. Especially since they announced the new one... which is, technically, what the iPhone should have been since it was launched; 3G wasn't exactly new technology back then...

I have a Gmail account to which I have all my mail directed. The iPhone has settings to access Gmail over IMAP so changes on the iPhone are reflected in the Gmail web interface. However, new emails aren't pushed to the iPhone; you still have to tell it to "manually" (it's automatic, but as opposed to the emails being pushed...) check every 30 minutes, or whatever you choose. I also have my own domain, which Gmail is configured to use as the default from address.

The new iPhone software is going to support Microsoft Exchange, and Apple also announce their own version of Exchange for the rest of us called MobileMe. MobileMe, like Exchange, will do push email (as well as push contacts and calendar, but they would be more of a bonus than a necessity) for a price. However, what I wanted to know was would I be able to link it to Gmail (via IMAP) so that it could push my Gmail emails to the iPhone I'm planning to buy at the end of the year and also pass any changes made to those emails by the iPhone (mark as read, for instance) back to the Gmail web interface. And, of course, I'd want to use my own email address.

On Monday, I finally managed to find an appropriate "Contact Us" form on the Apple website (it's much harder than it should be) and asked Apple if these two things would be possible. I've just received the reply (well, a few hours ago, but it was picked up as spam...). So, according to the reply:

So - unless anything changes in the next few months - in November I'll be saving my £59 for something else, and sticking to polling Gmail every few minutes

If us individuals are always told not to give our bank account number and sort code to nefarious folk, lest they empty out bank accounts, why then can companies print their details on statements and invoices for us to pay them by BACS without these malicious people emptying their bank accounts too?

(There's a screenshot on Flickr if you can see the video below.)

It would be nice if Gmail could tell me itself…

Follow-up to I have more spam than emails… from The randomness of tomorrow, today!

I don't use Thunderbird; I just use the Gmail web interface. However I'd previously installed Thunderbird just to have a look.

So, using IMAP, I have established that my (currently) 20,333 conversations contain 27,620 emails... which is still less than the spam I get.

I restarted about 10 times, but I got there in the end…

Follow-up to If I only had a heart… from The randomness of tomorrow, today!

My score's much better this time...

I have more spam than emails…

I'm sure there will be many people that get much more spam that I do, but it's still a lot of spam...

(Coincidentally, since I took the screenshot the spam has risen to 68,303)

UPDATE: Another quick calculation: taking the number of spam over the past 30 days, and extrapolating it over the past 4 years gives about 3 million spam...

UPDATE: The number of spam I get has increased somewhat this year, and I've just found documented evidence that I used to get less spam. I'd forgotten about that one...

* In case you didn't know, Gmail groups related emails into conversations. The numbers in the screenshots are the numbers of conversations; the actual number of emails will be much higher, but isn't nearly as easy to find...