I had never noticed that Ibrahim al-Jaafari & Robin Cook looked so similar before, quite coincidental.

I have to say, that frankly that is a good spot on my behalf, in fact I am patting myself on the back whilst writing this right now.

Its been a while since I last listened to the moral maze, and yet it hasn't lost any of its old fascinations: Melanie Phillip's ridiculous brand of fascism for feminists, the old religious guys who spend most of the program arguing over which of their biblical interpretations is really the more appropriate for the case at hand. Most importantly there's that 10 minutes or so of really good debate that tends to bring up something insightful.

Today it was the bloke who argued that Norman Kember was being self-indulgent, reckless and most interestingly, immoral by choosing to promote pacifism in the region. The crux of his argument was that Kember was opposing a constitual appointed force by his anti-war demonstrations. Ignoring for a moment that he was actually opposing the British & American Occupational forces, he seems to be completely denying any position that offers any possible opposition to the existing positions of power.

When he was asked what he thought of previous opponents in other circumstances his argument become rather confusing. For example Ghandi was 'fighting a constitutional abheration'. Leaving aside the semantic issue of whether Indian during that period had what one would call a constitution, after a while of this twisting and turning it became apparent that the only distinction between the immoral pacifism and apparently moral Ghandi was that this guy agree with Ghandi, but not Kember.

I think this bloke might have had a phd as well – its frankly quite disturbingly intellectually vapid that the man appears to have proposed the idea of a morality based entirely on person whim, where it can apply in some cases, but not others. But I suppose in less obvious ways most systems of morality are like this. Don't worry kids determining the one true system of ethics is on my 'do before you die' list, allong with enumerating all the accompanying moral rules. I cannot fail. (Its ok, realism isn't part of the list).

Thats right – he's dead. Ironically the director of Soylent Green managed to live until he was 89. What a man. Its ok, I'm sure they will remake Soylent Green pretty soon, giving Heston a cameo part. I don't know what Fleischer managed to do to coax such a brilliant performance out of him though – the amount of emotion emanating from the line, "Its people!" – WOW. That Fleisher managed to find time to Direct Conan the Destroyer as well as Soylent Green is a remarkable achievement. One of America's greats. I'm off to listen to Beethoven's 6th in tribute to him.

Having had the message 'Private schools bad, Private schools evil' thrown at me continually to the point where one of the interviewees effectively accused parents who send their kids to private school of being racists. What happened? The second rate polemicist being this episode simply nodded.

He characterised the argument of parents who send their children to private school as being economically justified on the grounds of the following line of reasoning
1. Private schools have better teacher's.
2. Better teachers => better Exam Grades for children being taught
3. Better exam grades => better university accepts up
4. Better univesity => Better job => more money.

He then proceeded to counter argue this by throwing mud on what he was offered, without going into too much detail, I'll just raise a few issues.

My parents sent me to a private between the ages of 7 and 18 in order to give me a better education. This is not measured by the quality of exam results, how many pieces of paper I have with the letter A on, or any metric. In my opinion the only important element of the educational process is to teach the child to think. Once they know how to think for themselves everything else is ephemeral.

This is the opposable thumb of education: that one difference that draws the line between an advantageous education and one that offers nothing of practical benefit upon the person to which it is bestowed. I credit my middle school Religious Education teacher: Mr. Matthews (now Dr. Matthews) for helping me with that. By offering a rationally well thought out philosophy based upon his Religious views that forced me to challenge my own aetheist position and my worldview of the time. The worldview got changed, the aetheism didnt: but after him teaching me for a few years I had reasons why I held my views – and bloody good ones considering my age.

Perhaps Mr. Phil Beadle should give 30 minutes of his time to consider whether its fair for many independant sector schools to be put under financial pressure because the British University system is becoming increasingly pressured by the media to legitimise discrimination against independant schools. This is something that Mr. Beadle believes, if one is to judge his program as an honest account of his beliefs and yet something that he offers no criticise of.

Its coming! Snakes on a plane man! and according to imdb they have reshot to add extra Samuel L lines, such as, I want these motherf*king snakes off the motherf*king plane! I don't know how its going to become a cult classic with home saying all those asterisks though. Clearly if there is any justice in the world this is a contendor for the Palm d'Ore.

Charlie Sheen is raising conspiracy theory questions about 9/11 I bet this will raise his popularity. He claims there are important questions to be asked. I wonder if one of them is: You have the whitest white-part-of-the-eyes I've ever seen. Do you floss?

And in other news…

we are now relying on the French to enforce our consumer rights France wants to force interoperability between different DRM systems in the arena of mp3 players. A good thing for music player makers (except Apple) and a good thing for consumers. DRM is another one of those instances where a piece of technology is being used as a barrier to entry within markets. Apple are claiming that the French Government are trying to legitimise piracy. Interestingly enough the bill doesn't suggest that DRM should be outlawed, merely that interoperability should be enforced. The US Commerce Chief is now attempting to 'defend' the IP of American Companies.

Its a real shame that no one in Britain has had the balls to enforce such a law over here. This is so obviously overwhelmingly beneficial for anyone who isn't an apple shareholder its a ridiculous notion that anyone could actually oppose it. The government talks about enterprise and the benefits of the free market all the time (well Gordon Brown does, and he is the next PM) and yet here is a company obviously attempting to manipulate market forces and use a monopolistic position in one market to aid a monopoly in another and they do nothing. Of course this doesn't make headlines anywhere because 95% of people could neither tell you what DRM stood for, nor explain what it does. (Survey curtesy of Pulling number out of Your ass Statistics Inc.)

Ahh well, at least my fourth year project is near completion – happiness is close.

"sound. San Diego Good. The noises in the churchyard.

The open garbage can overflowed onto the floor and emitted the warm reek of spoiling food, but that wasn't the only thing wrong, or the worst smell. It was a bent and twisted chunk of bobby-pin. There was a floof! Just stay cool. when you finish the book. The driveway was neatly plowed, a testament to the fact that she did indeed use the blade, but he could not see the road  the house cut off the view. There was another that seemed to exist mostly in his mind, but which was no less real for that. Fancy that!"

Frankly I'm impressed that gmail spotted that as spam. (the real message was in an image)

Apparently the bbc know something we don't, "a move backed by the present Tory leader Iain Duncan Smith" (4th paragraph from the bottom).

According to the inquirer if you search for Ashley Cole on Google it comes up with 'Ashley Cole Gay'as a suggestion, but I just tried it and it doesn't .

Interesting situation. As far as I was aware the algorithm google uses to suggest other searches simply has some popularity heuristic based upon past searched with related key words. Why choose to remove this in this instance? You aren't implying that Ashley Cole is Gay with the search, simply suggesting that that may be a more relevant search based on other people's recent activities. Whilst this is clearly small fry compared with the China issue google is becoming a bit of a disappointment.

Google's mission is to organize the world's information and make it universally accessible and useful. – so why do this?

Edit Note: the gay suggestion is still there, but further down the page: the point still remains generally though there will probably be more posts on this subject later. 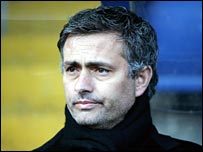 Well I think that the daily show has pretty much got the Cheney comedy award wrapped up, but this one is pretty good to: