The next few days

Well after 5 days of boredom, swelling, soup, tiredness and being indoors I finally am a) not contagious and b) actually feeling well enough to do things. So here are the things that I hope to be doing in the next few days:

Tomorrow: Seeing Personal Tutor to sort out the exam I missed and then going to see the Dead 60's in preperation for…

Friday: Driving home to see R.E.M. at LCCC. Should be a great day especially since for £35 I get to see Feeder, Idlewild (no too bothered about these two), The Zutons (saved me buying a Final Fling ticket) and the best band on the planet for the second time this year.

Saturday: Hurry back here in time for Jimmy's BBQ and whatever other nocturnal acivities everybody has planned.

Now the big question is how may of these will I actually achieve.

So the list of ailments as it currently stands in our house:

Whilst revising The Third Man last night Han and I thought we might have spied the original chav (or charv). Complete with burberry ball and fur-lined parka here is the young sprite who goes on to lead a mob which attempts to hunt down the main character: 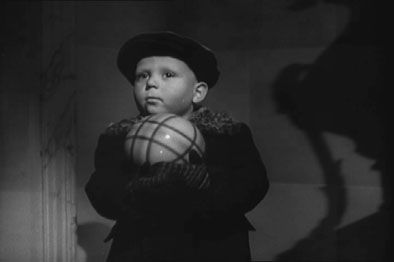 One of the things I love (or is that love to hate?) about the music industry is their continued ability to latch on to the next-big-thing and stick with it just long enough for a wave of better bands to slip under the radar. The Bloc Party album was the darling earlier this year, and quite rightly, it being one of the best albums out so far this year. Since then there's been the Kaiser Chiefs (an excellent album that i haven't played for weeks and, surprisingly, am not missing in the slightest) and the Bravery, both decent bands but in terms of enduring quality probably not contenders for the 'best album of the year' stakes no matter how much fun they are. As a result of these albums, plus the return of such chart-friendly though frankly rubbish acts such as The Stereophonics and Feeder, smaller bands such as Nine Black Alps, The Departure, the Paddingtons, Tower of London have been virtually ignored by the record buying public. For me this has both positive and negative aspects. Firstly I feel sorry for the acts who don't get the exposure, but I am simultaneously smug at being able to talk to my friends back home about bands and have them not know who I'm talking about. Every now and then a band comes along that deserve to be huge but deep in my heart I want them to remain my little secret; as a result no radio overkill, no stragglers who pretend to have known about the band since they formed and no selling out. Sadly I think I might be too late for Maximo Park.

I won't try to pretend that I was there from the start although there are certain people who can probably say that. But I was still there way before the album came out. I'm not entirely sure how much exposure Maximo Park are getting on national radio, certanly their album wasn't in the Top 40 last week, however it can't be long before they skyrocket because this album is superb. On first listen you hum along trying to second guess where all of the songs are going and almost every time you fail. The singles 'Apply Some Pressure' and 'Graffiti' are the obvious highlights on first listen but this is only because you have heard them before. Once it's been through the player once play it again straight away. After 2 listens 'Graffiti' suddenly disappears from the album; I tend to skip it, I've got a bit bored of it. It''s taken 3 weeks for it to finally sink in but here goes:

'Signal and Sign' begins with a drum beat that sounds a little bit like Fleetwood Mac's 'Tusk' accompanied by a 'Dont Fear the Reaperesque' guitar riff. But then the heavily accented vocals burst out and the song becomes something totally different. It is the perfect opener setting up the stop-start, organ filled rock that is to follow. In a 'playing-it-safe' kind of way the two big singles are up next. 'Apply Some Pressure' is simply incredible. Maximo Park have perfected a structure which splits many of their songs in 2; you get a verse, a chorus, a verse, a chorus, a second chorus, a chorus, a second chorus and then the verse again so you basically get 2 songs in 1; a very good song building into a great one that stands up to at least 9 weeks of continuous listening. The album version is marginally different to the single version but this is a bonus. Then there is Graffiti, a great song to sing along to or to hear on a night out. Extremely catchy as well. For me it doesn't stand up to as much repeated listening as a lot of the album but then I have been playing it to death for weeks. Probably the album's selling point and it just shows how good an album it is that it is far from the best song in the collection.

'Postcard of A Painting' is a very minimalist song. At 2:15 it doesn't have a great deal of time but manages to say a lot. It has some great lyrics and is just a gnerally good song bridging the gap between 'Graffiti' and current single 'Going Missing' which sounds almost like a rewritten version of Apply Some Pressure, having the same type of structre. But it isn't. Which is good. Another catchy song which starts out being one thing and then turns into something else.

Although a very good album up to this point it is with 'I Want You To Stay' and the two song which follow it that the album really heats its peak. This song is incredibly subtle and as a result it's magnificence isn't immediately apparent but the lyrics are particularly well crafted, particularly the refrain "Nothing works round here / Where cranes collect the sky". With the following song, 'Limassol', the record moves up a gear and it is perhaps for this reason that 'I Want You to Stay' appears to have been overshadowed. 'Limassol's' frantic guitar grabs you by the collar and is the musical equivalent of a ride on the Waltzers; out of control one moment and then suddenly slowing for a refrain that sounds almost like Ocean Colour Scene but cleverer. The highlight is the moment when the song builds into a cacophony of noise before the riff breaks out and tears the song apart again. Blinding.

Then comes 'The Coast is Always Changing'. At first this sounds like the most poppy song on the record, the guitar chimes sounding worryingly familiar, until the first chorus. The melodies in this song are just amazing. This song again uses the 'Maximo Park Song Structure' (see Apply Some Pressure) to create what is at the moment my favourite song on the album and one of the best tracks of the year so far. It sounds so sentimental and heartfelt without sinking into cheesiness in any way. Truly brilliant.

The next three songs change the tone once again. 'The Night I Lost My Head' is two minutes of upbeat songwriting that is for me the weak point of the album. Not that it's a bad song it just doesnt really go anywhere, the only time that this can be said in this collection of songs. 'Once, A Glimpse' pulls it back on track with it's frantic chorus and Whipping Boyesque guitar sound, without pausing for breath.

"Now I'm All Over the Shop" begins by sounding like the most unacomplished piece of songwriting on the record until about the 5th second when it all makes perfect sense with another magnificent refrain which again turns into a rip-roaring chorus. Rapidly becoming one of my favourite tracks on the album.

The penultimate song, 'Acrobat', is far and away the most untypical track in this collection. It basically involves what sounds like a synthy sound wash and drum machines over which the vocals are spoken, apart from the beautifully incongruous chorus "I am not an acrobat / I cannot perform these tricks for you". It sounds like a cross between Air and R.E.M.'s song 'Airportman'. The only complaint here is that it should be the last song on the album. Not that 'Kiss You Better' is a poor finale, which in some ways it is, but the pacing of the record has been changed so impressively by 'Acrobat' that it is difficult to get back into the flow of the uptempo guitars for little more than two minutes, even if it is the most lighthearted cut on the album. It is highly enjoyable but should probably have been slotted earlier on in the record; it ends too suddenly.

This album is a fantastic piece of work and a brilliant debut. Whereas The Bravery and the Kaiser Chiefs appear to have very little potential for progression Maximo Park look set to be around for a while. Five stars may be slightly generous but four sars would be harsh. If you like this album I would suggest R.E.M. debut album Murmur, the drumming and melody patterns are quite similar in style if not entirely comparable.

One tip for the future. Get ready for The Five O'clock Heroes. Hopefully they have an album coming out sometime this year and if the two singles that have already been released are representative of the album then it's going to be amazing. And since we reviewed their first single on RaW a month before it was released I can say that I was there at the start. Let's hope they live up to my expectations. But until then there's Maximo Park and in my opinion this is the best album so far this year.