I have just finished reading this book for the second time, so I though I would give my thoughts on this book as a biochemistry student.

I will assume that readers of this review are familiar with the concept of evolution.

In the book Michael Behe argues based on analogies with some mechanical systems (the mousetrap) that there are Irreducibly complex systems within organisms that demand an intelegent designer.

The irreducible complexity argument relies on there being biological systems that completely fail when one component is removed. A mechanical example of this given by Behe is a mouse trap (p42 fig 2–2) which will not function at all if one component is removed. Behe then describes various biochemical systems and pathways such as the vision event in rods in the eye, blood clotting, the cilia, the bacterial flagellum and intracellular transport (ask me if you need these explaining to you). He shows that each of these systems is nonfunctional if components are removed and in some cases are actually detrimental and dangerous to the organism in question when incomplete (e.g. unregulated blood clotting). The irreducible complexity of these systems argues for an intelligent designer that can place these systems in place complete. Behe also defends the intelegent designer concept from the argument that states that some organisms appear to have features that (according to those suggesting this) are not perfectly designed so (supposedly) refuting intelligent design.

The book is friendly and accessible to both laymen and scientists, each deriving his own from the book. The layman will become more educated about biochemical systems, and the scientist will find extensions of the argument into his own area of interest.

In conclusion: this book should be read, and read carefully. It will do you no good to casually read this and/or to vent your spleen on it because it challenges evolution. Read it carefully, analyzing the points made and you will find a well reasoned argument. It may or may not convince you, but no doubt you will better off for reading this book carefully, since carefully study of issues always improves your mind.

I suggest that you treat reading this book like you would a science textbook or paper, read it carefully, going back over sections and making notes. This is no light book so the more effort spent on reading and understanding it the more usefulness you will derive from it. 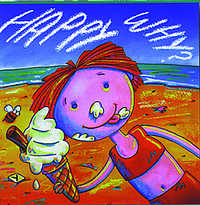 The death of Christopher Reeve has brought to the forefront of my mind the issue of stem cells and the permission/non-funding of embryonic stem cell research in the UK and the USA. Christopher Reeve believed that stem cells treatments, had they been available, might have been able to reverse his paralysis. Im sure that his death will be used by the campaign to allow embryonic stem cell research as a clear example of a tragic case where stem cells could have greatly helped.

I agree with the US administrations position that embryonic stem cell research should not be funded by the state. Of course it is tragic that someone should be in such as state as Christopher Reeve was, but we should not allow our (right and appropriate) sense of outrage at someone dreadful injuries to overhaul our moral sense in determining whether a treatment should be researched or not. The need for a treatment is not enough. The treatment should also be morally acceptable. This is the issue with embryonic stem cells.

The production of embryonic stem cells requires an embryo. In most envisioned treatments this embryo would be a clone of the patient in order to avoid problems with tissue rejection. The moral problem that I see with this treatment (and feel free to comment on this article in your agreement or disagreement) is that it requires the destruction of an embryo in order to treat the individual. We would not allow the killing of a newborn simply to treat an adult with a medical problem. The whole argument for the embryonic stem cell research hinges on the assumption that the embryo is not a valuable human in the same way as a newborn is. This argument, you will not be surprised to know is the basis of the pro-choice position, because lets face it, if the unborn is not as human and therefore as deserving of protection as any other human, then the pro-choice position is correct, its all about the choice of the mother

Fortunately for us, the pro-choice position is not correct. This can be demonstrated by drawing analogies between the conditions of the unborn that cause people to say that it is not human and valuable and adults who show some of these same traits but are still regarded as valuable humans. These differences can be summarised by the acronym SLED.

The unborn is different from other people in all these regards, but none of them are sufficient for it to be less human than any other individual. The conclusion is that the unborn is human and should be protected as any other human.

Plenty of alternatives exist such as adult stem cells or placental stem cells. There is not really the need to kill embryos to derive these cells.

I recently finished this book, the latest in the series about Gaunts Ghosts. Well all I can say at the moment is it was somehow cool and disappointing at the same time. It was lacking the mega-apocalyptic battles involving thousands of men that I had enjoyed in the previous books, but at the same time, the slow corruption of the whole team was a joy to red of. If you know the series the identity of the general is somewhat poorly concealed and you will guess fairly early on who he is, One of the most interesting bits in the book for future books actually occurs at the beginning where Dan Baur and Commissar Hark are named as the Commanding Officer and Commissar of the regiment specifically. I wonder does this mean that we might get some stories about the regiment being lead by these two? Also I want to know whats happening to Brin Milo now that hes gone off with Saint Sabbat. Perhaps another book in the vein of Ghostmaker would be in order to get an update on all the little story threads that could do with being progressed.

Overall Id rate the book fairly highly, though not as good as some of Abnetts other material. The best part of the book for me is that I have an autographed hard back copy (obtained at Games Day 2004)