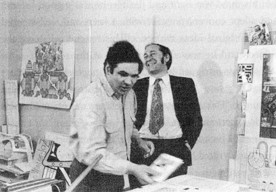 The screeching acid yellow of the cover is a bit too much, don’t you think? Under test conditions it has actually proven to attract wasps.

Actually, everything about this magazine is wired with hysteria. Its look, its themes, the intent. This hysteria took a year and a half to reach its ne plus ultra, and now the physical object and all its planned web-peripheries are the exposition of our lovely little problem.  Which is striving to be as alive between the pages as possible. Awkward, sensual and as slippery as a bolting rabbit.

Art editors have a strange role. You often have to speak up for the inexpressible. Images are psychic objects made of heavier material than hieroglyphs. I categorically did not want to make a literary magazine that contained images as window-dressing for the writing. I wanted to give respect to the artists as equal contributors to the concept of the magazine. This is a puzzle I have yet to solve. For me it is the main interest of the project. Identifying the problem is hopefully the first step.

I have noticed that there are very few high-profile artist-writers, or people whose multi-platform work is packaged and consumed together as one holistic practice. Call it attention deficit culture, marketing  pragmatism or a conceptual fracture between individuals working in different traditions and markets. This honest, integrated practice: was it ever thus? Perhaps it was never thus, or perhaps contemporary separate academic training grounds for aspirant writers and artists deepen the fracture. Perhaps this mixed state of mind needs a mixed magazine. There’s space here to introduce just one piece of artist’s work. You’ll have to buy the magazine to see the rest.  Hazal Atashroo’s ‘She reveals/conceals’ series at first appears to be a very quiet kind of exposure*. Violent, flash-revealed nature. A pair of hands feyly clutching at stage velvet. And is the girl on the rooftop a bedroom superhero, a suicide commando or a diver abdicating through and away from the waking, domestic world. All forms of passage, rite, exchange and sacrifice. This is what ‘Death vs. Taxes’ meant to me.

My ‘ultimate’ right now is the sensualist fantasy with socialist concerns. The serious unpacking comes after the experiencing, if you like. Make the cycle longer. Give yourself some lag time for enjoyment. I am into fantasies. I want to extricate why I have the fantasies I have, but I will try not to feel guilty that I am, initially, very prone to those fantasies.

China Mieville, who teaches Creative Writing at Warwick, said something wonderful about Louise Bourgeois’ much loved sculpture ‘Maman’ when I interviewed him back in June:

'Maman’ is very, very much part of the world.  Because it’s ready to stalk, ready to walk. It’s just we haven’t quite worked out how it got there. Whereas, as these other pieces are saying, ‘we are in ourself, we are of ourself, that’s it, the edges are closed’. That kind of event-ness I like a lot.

The visual arts-centred interview concerns China’s favourite cult illustrators, his feelings about contemporary art and how he personally chooses to navigate internet culture. You can read the interview in the upcoming Issue 2 ‘Arms vs. Song’. We’re looking at ways in which we push the interview format in future. Perhaps we’ll select subjects outside of the arts : canvass the imaginations of the non self-selectors and see what these conversations throw up.

Our first stockist is Tenderproduct. A shop with an exhibition space attached (Tenderpixel).  Chief curator Lisa Slominski has very kindly decided to take a chance on us. If you want to buy a copy of Polarity in person and check out an exciting new show in the process, then their new exhibition ‘Traverse Tourist’ takes place from the 7th to the 26th of September. The exhibition aims to unthread the complex theory of ‘globalisation’ through a display of artist and designer’s interactions with the souvenir-object.