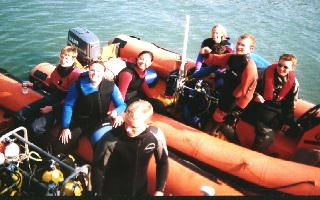 Err, hope this works. This is the last trip I went on with RUBSAC the Reading University British Sub-Aqua Club. The website is www.smartgroups.com/groups/rubsac

I'm the bloke standing up in the far boat.

Now I at Warwick though I have joined WUSAC and went off to Leistershire for my first adventure with them at Stoney Cove last weekend. Awesome, great to be back in British waters after sunny climes. Their website is sunion.warwick.ac.uk/subaqua

The club meets at 7 on Thursday nights in the pool at the sports centre and as well as training for newbies we play Octopush. This is underwater hockey and it's great. come along. Also in Rootes for a few beers 9 onwards. 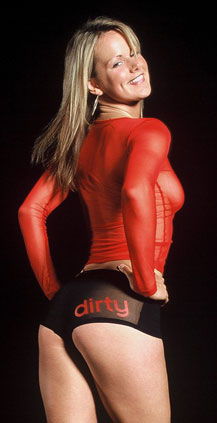 This is just a little about my summer job. I met this bloke whilst diving in Egypt and he said to me, "do you want to go round all the music festivals this summer and sell Dirty Knickers?"

I said yes. Mostly what I was doing was painting sometimes obscene Henna Tattoos on sometimes quite obscene parts of obscenely drunk girls. I also sold a few pairs of knickers. Here is a picture of my friend who raied my blood pressure a little by pole dancing whist selling her underwear, no the underwear. The photo was taken from the website dirtyknickersonline.com wear you can order them from.

By the way the summer was madness and it seems a little strange calming down and becoming a Primary school teacher.

The Turbulent Term of Tyke Tyler

For my teaching course I have to reviw a number of childrens books. Here are my notes:

The Turbulent Term of Tyke Tiler  by Gene Kemp

The first chapter, as well as every other chapter begins with a joke which I am sure gives the book instant appeal to children. It follows straight on from this with action and immediately gives the reader an impression for the main character Tyke, who is telling the story in the first person.

Tyke is a very dominant and aggressive character, interested in climbing and very physically capable. We are gripped after the cliff hanger at the end of the first chapter. Partly due to the first person account though we also discover Tykes sense of truth and responsibility for others such as Danny, Tykes friend, who not only has a speech impediment but is a much less intellectually alert character than Tyke.

Although the two friends get into a series of trouble together we forgive Danny because of his simpleness and family background and also Tyke, due to an appreciation of motive and loyalty. Tyke is eventually caught for trying to help Danny after he stole ten pounds from a teachers purse but after following Tykes sense of right and wrong in this matter and the way in which it was at least attempted to be handled, we are glad that a fair minded headmaster doesnt make the punishment too harsh. The adventures continue as we grow to know our characters and their pets. Danny becomes obsessive about a skellinton and Tyke recovers the bones for him. We grow to appreciate their friendship as Tyke helps him in a test that would otherwise see them sent to separate schools.

Dannys character is then delightfully changed from impulsive and helpless thief: to honourable Knight of the round table when a new teacher gives him her faith and favour. We see Danny as misunderstood and redeemable and believe that much of this, as their teacher Mr Merchant believes, is a result of Tykes positive influence. The climax of the book we think results in Danny being accused of stealing a watch which we, as well as Tyke know he didnt take, and hiding. Tyke, after a difficult confrontation, manages to convince the headmaster that Danny was set up by stepping into the headmasters adult language and confronting him on his own terms. This leads to the happy ending of our characters being redeemed as well as their enemies being defeated and shown for what they really are. A perfect childrens book ending.

SKIP THIS NEXT PARAGRAPH IF YOU HAVE NOT READ THIS BOOK YOU WILL SPOIL AN AMAZING ENDING! READ ON FROM NEXT CAPITALS.

This however is not the end. On the last day Tyke looks up to the top of the school building to the bell, un sounded for thirty years and hears the voice of their history passionate teacher, telling of a former Tiler who climbed and rang that bell. Tyke is the best climber in the school and the school is empty. On the roof Tyke is about to ring the bell when the crowded figures below shout not to. Not wanting anymore trouble Tyke is about to get down when Mrs Somers, the teacher Tyke hates, shouts angrily and uses Tykes real name which we know Tyke hates. Tykes name is Theodora and Tyke is a naughty, disobedient girl! This one sentence turns the book completely on its head and shakes our understanding of the character we thought we knew so well.

The strength of the book lies in its accurate portrayal of events through the eyes and emotions of Tyke and our fundamental belief in every word weighs up to make us unable to believe we had not known this simple fact about our hero. Not only does it make the reader mentally re-read the entire book but the readers entire approach to reading and observation.

I loved this book and Im sure children love this book as well. It deals effectively with issues such as loyalty, justice and even romance from the point of view of a child. It deals in adventure of a mundane sort that only children appreciate where a load of old sheep bones in a smelly river can become a dead mans bones. The sort of adventure that in adult life is thought of as Don Quixote like madness. It is set in a world that contains almost entirely a school, a home and a few secret places, adult readers remember it and children live in it, so both believe whole heartedly.

The last chapter leaves us more convinced of its reality as it reveals the story to be set down by the teacher as he sat listening to Tykes account of a turbulent term as Tyke lies in bed recovering from injuries; as the school fell down about both ears, as the school bell rung within them.

For my PGCE course I am having to review a fewchildrens books. Here are some of my notes:

The Green Children  By Kevin Crossley-Holland and Alan Marks

The illustrations in this book are fantastic and capture mood and emotion very effectively. Their style as well as subject lends the book the magical and mythical quality of a place that exists on the very edge between two worlds.

It begins very factually This is what happened. And goes on to describe and elusive sensory experience of hearing bells, bright bells, going up and up through a cave following a lost lamb, the narrator is blinded by light and then she sees faces. It his here that although we already know from the title and illustrations that a group of children find two green children, we realise with a little surprise that the narrator is in fact one of these green children.

We follow the narrator and her brother a they experience nervousness in the face of such strangeness and then with them we experience wonder at the colour of the world, take simple delight in berries and birds. The use of language such as the birds loosing their songs, sensations such as the girl feeling the wind in her hair and trying to catch it between her hands and their simple disbelief that the other children were not green gives the reader a sense of the vast distance and gulf between the two worlds. They cannot even understand the other children. It is a book for children and so appropriate that children find them, as we find out later a childs curiosity could have been a fear in adults.

They travel through a creaking (magical) wood picking up colourful trophies to take home with them. They are offered a meal and unable to eat anything but green beans, again establishing distance. Here, with the yelping of the adult bean carrier is the first indication that they may not always be received so graciously. We touched our noses and lips to thank the mother and the children go to look for their home but fear grips the children and the reader as they begin to realise they cant find it and dropping their trophies search, as the illustration shows us, at night through dark, course woodland with forlorn and tearful faces.

The brother learnt enough words to say please can we go home before he fell ill and the book becomes irredeemably sad when he dies in the arms of his sister and we realise that now the green girl is alone.

She lives with the family, learns their language and takes on a name. Alice tells them of the green country and describes it beautifully using the moss green and willow green colours she has learned. The girl searches endlessly for her home and never finds it, she realises that she may have to make a home in the colour world and is drawn by the idea of visiting the fair. Here, as suggested earlier, she is branded a freak and though her friend Guy tries to protect her she is chased from the fair.

The story ends with Maypole dancing and happiness although the reader still feels sorrowful. There is a suggestion that the story is based on a folk tale, that it really happened and a song is included on the last page which I think children would love. It is about the spring and the start of new things.

I think this book is fantastic, both for its depth of emotion, beautiful presentation, wonder, fear, death, loneliness and a happy fortitude for the future. I would imagine that children of many ages love this story.

Hi,
I'm just experimenting with setting up this blog at the moment, so here's hoping I get a pretty photo or two to put up soon. If your on yahoo chat esp philosophy lounge i'm Angkor. OK, to be continued…