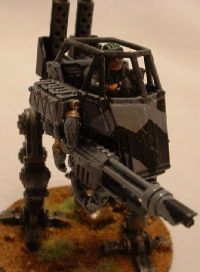 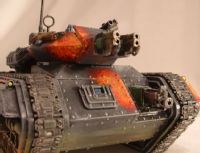 Sorry for the long gap between the elites and my troops section but here we go.

Troops form the core of all armies for Warhamer 40,000. They represent our basic troopers, who bear the brunt of the battle. They often represent the most tactically flexible units in your army, able to soak up firepower and hit hard against either troops or enemy armour both at range and in close combat. Troops are essential for winning the battle, since, although they can't do everything as well as the more specialised units can, they have few weaknesses. Also in some battles, they will be the only thing you can depoly at the start of the battle, and so become essential for your battle.

Imperial guard troops units work a little differently to other armies. In other armies, you buy one unit per choice on the force organization chart (a chart that determines how many of each type of unit (HQ, Elites, Troops, Fast attack and Heavy Support) you can have in your army). However, for an Imperial guard army the main troops choice is called an Infantry Platoon. This consists of a command squad (5 men) and 2 to 5 infantry squads (of 10 men each). All these can then be bought upgrades.

Imperial Guard armies also have Conscript Platoons (large squads of more poorly trained but cheaper men) and Armoured Fist Squads (single infantry squads of 10 men mounted in an IFV) available instead of taking an infantry platoon. However to take a conscript platoon or armoured fist squad requires you to take an infantry platoon first, limiting their numbers.

My army at the moment consists of 2 Infantry Platoons with 3 squads and a Conscript Platoon. I plan to add an Armoured Fist Squad in the near future.

Each Platoon is lead by a command squad consisting of a junior officer and 4 men. In my army the Officer is equipped with a boltgun, one man with a grenade launcher and 2 men in each squad form a weapons team equipped with either a missile launcher or an autocannon. The Autocannon is a long range fairly rapid firing weapon, designed for engaging enemy heavy infantry and light to medium armoured vehicles. It lacks the strength to take on the heaviest armour in the games, but makes up for this with its long range and higher rate of fire.
These pictures show the command squads for the two platoons in my army.

Each platoon is identical in terms of the infantry squads that it contains. Each contains 3 squads each of 10 men, with a special and heavy weapon. These are a squad with a missile launcher and a grenade launcher

A second squad carries a plasma gun (powerful but prone to overheating!) and an autocannon.

A third Squad carries another plasma gun, and a Lascannon (one of the best anti-tank weapons in the game, at least the man portable ones) 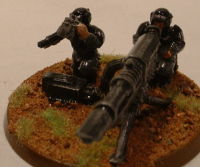 These units (Infantry and Conscript platoons) do most of the fighting in my army, both at long range and short range. They also absorb the majority of the points cost of my army, as befits theyre central role. All my games are won or lost based on my use of these units, and their positioning and movement.

-next in the series Fast Attack

Elites choices are powerful, but rare units. They are usually more powerful versions of your basic units, or specialised units in their own right.

My army has but one elites choice at the moment. 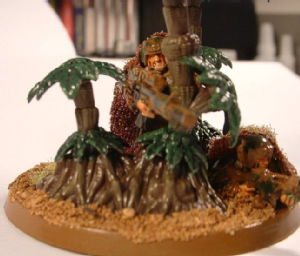 I use these models to represent ratling snipers. Ratling snipers for the sniping core of the Imperial Guard. I have modeled these troops and sniper-observer pairs on large bases. In game terms I count each base as 2 snipers. The models were originally going to represent special weapons teams equipped with sniper rifles, but since 6 ratlings only cost 1 pt more than a special weapons team with 3 sniper rifles, I went for the ratlings. Other advantages are the bonus to cover saves, and the fact that ratlings can infiltrate. This way of representing snipers is common in imperial guard armies, as many people don't like the ratling models. 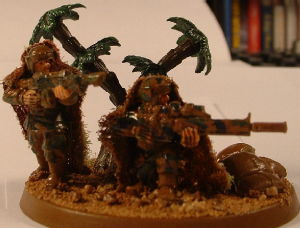 In games, these guys take on tough creatures (since they wound on a fixed roll they're perfect for shooting big monsters). I also use them to disrupt enemy squads, since a squad that takes casualties from a sniper rifle can become pinned, unable to move as they hit the dirt!

– next in the series – Troops 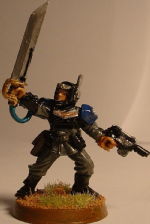 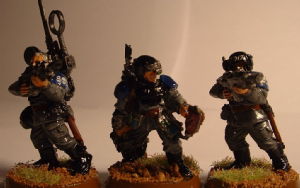 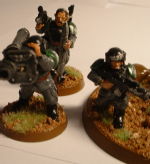