Today, we have España vs Russia and Sweden vs Greece.

A España team that contains David Villa has just beaten a Russia team whose coach is Mr Guus 'Mr Fixed It' Hiddink.

Now, we have Sweden where Sven Goran Eriksson comes from against the defending champion Greece. I can't wait to see the result. 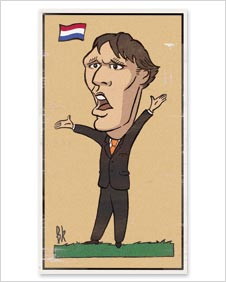 Who the hell is he?

Let me give you some clues:

Pay attention to the flag. It tells you his nationality and where he manages.

He used to play for AC Milan.

He scored that volley goal against the former USSR in the final of Euro 1988.

He is going to take over the job of Ajax manager after Euro 2008.