Travel Report: In the Cederberg Mountains

Here is the report on the first 200kms of my ride around the Western Cape of South Africa.

I have a great new discovery, for which I make several astounding claims. A newly revealed holistic therapy. A miracle cure for both body and mind. Really, its true, Im not trying to con you out of money, or sign your soul away to some mad new religion.

At least it did work for me. See if you think it sounds like a panacea. Here is what I prescribe… 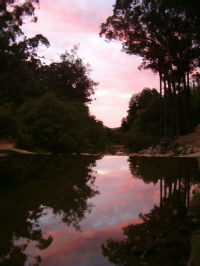 The treatment itself is simple, but with several necessary and arduous precursors. Let's start with the final and most pleasant stage of the process. You must be immersed to the shoulders in the warm and clean waters of a mountain stream. A wide and calm pool at the side of a ford is a prime location for this. Then you must stand on one foot, balanced perfectly on an appropriately sized boulder. You then spin slowly in a clockwise direction. A velvety carpet of moss may assist in the perfection of this maneuver.

This slow rotation allows for the rhythmic apperception of a horizon of golden and red cliff faces, fronted by giant cedar trees, and topped with a bright and clear blue sky. Whilst at every point in the rotation, the sweet cedar aroma, and the pulsating buzz of millions of insects, remains a constant intensity. 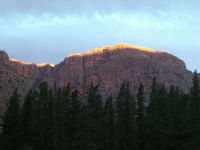 One should also try to ignore the occasional curious fish swimming in close proximity. Treat it with a certain Buddhist indifference.
Does that sound good? Do you want to have a go? Recall that I described this as being only the final stage in the process. Remember those arduous but necessary precursors?

To start with, you must fly to Cape Town. There are means of transport less torturous than British Airways, but I suspect that the body and mind must be thoroughly broken before they can gain salvation through the cure described above. Paper thin seats with no leg room are the most efficient means to inflict the required degree of pain. To make things worse, become separated from your beautiful wife and baby at Johannesburg, for they have other plans. 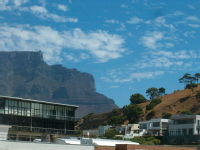 At Cape Town, take the shuttle bus from the airport, allowing the talkative driver to both amaze and terrify you. On the one hand it is said to be a city of harmony, integration and culture. Whilst on the other, you are told not to go out after 5pm (sunset is currently 8pm), or you will definitely without a doubt meet with a terrible fate.
Next, I recommend an intellectual challenge. Stay at the fine Victoria Junction Hotel in Cape Town. Take the opportunity to rigorously debate skepticism, Empiricism and theology with the philosophically adept waiter by the name of Junior. His renditions of the speeches of Martin Luther King are inspirational. 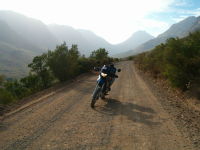 The following morning, you must collect a BMW F650 GS Dakar motorcycle from Karoo Biking. The next stage of the process consists of a journey for which only this bike is suitable. Firstly, ride out of the urban sprawl with the agility of a springbok. Then, blast up the N7 highway at 120kph, passing double-articulated trucks with ease. And finally after 200km, turn of the tar and onto the dirt. The high speed vibration of the big single cylinder engine adds a further degree of stress, particularly to the hands and feet – precisely those areas reached most immediately by the therapy.

The Algeria campsite in the Cederberg Wilderness Area is about 30km along the dirt road. The build up to arrival is increasingly impressive. The track winds through a mountain pass, with some moderately steep rises and descents. The surface is mostly good smooth gravel, with the occasional loose scree and exciting adverse cambered rising bend. The views forcibly distract one's attention from the task of keeping it upright and forwards flowing. But I have to say it was for me a great ride. 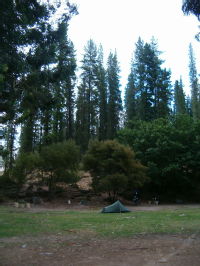 On reaching the camp, take of your helmet and ear-plugs, and think you have suddenly developed tinnitus. After the panic subsides, realize that the bush here is packed with insects. Loud and perfectly well synchronized insects.

Finally, you have a choice. Either set up camp in one of the spacious shady spots (they also have some chalets), or proceed directly to the therapy pool. I chose the latter option, fully clothed (remove helmet and heavy biker boots first).

As someone once said, this is how religions get started.

Onto part 2, Eating mud in the Karoo